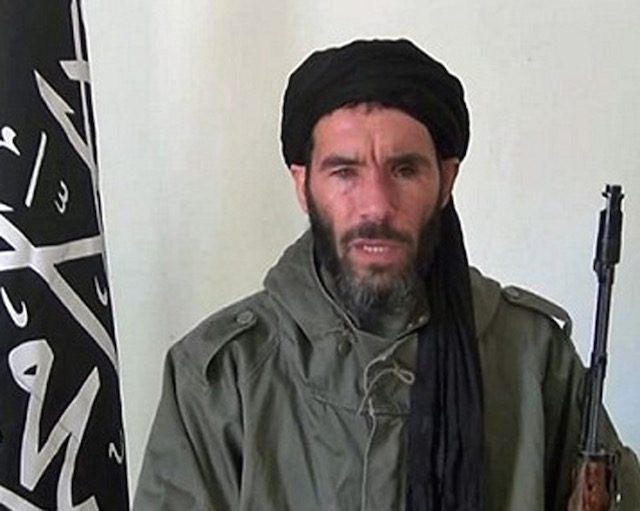 BENGHAZI, Libya (UPDATED) – Al-Qaeda-linked jihadist Mokhtar Belmokhtar, who allegedly masterminded the siege of an Algerian gas plant in which 38 hostages died, has been killed in a US air strike, Libya’s internationally recognized government said Sunday, June 14.

“American jets conducted an operation which resulted in the deaths of Mokhtar Belmokhtar and a group of Libyans belonging to a terrorist organization in eastern Libya,” said the statement, which was posted on Facebook.

The Pentagon said Belmokhtar had been the target of the strike but did not confirm he had been killed.

Islamist commander Belmokhtar, nicknamed variously as “The Uncatchable”, “Mr Marlboro” and “The One-Eyed”, was the leader of the north African Al-Murabitoun militant group and a former chief of Al-Qaeda in the Islamic Maghreb.

Wanted for terrorist activities in several countries, he was the alleged mastermind behind the 2013 siege of an Algerian gas plant in which 38 mostly Western hostages were killed.

“I can confirm that the target of last night’s counterterrorism strike in Libya was Mokhtar Belmokhtar,” Pentagon spokesman Colonel Steve Warren said in a statement.

“The strike was carried out by US aircraft. We are continuing to assess the results of the operation and will provide more details as appropriate.”

The US did not immediately confirm more details of the operation. Washington has in the past used drones to strike targets in the North African region, but the New York Times reported this was the first US air strike of any kind carried out in Libya since the fall of Moamer Kadhafi’s regime in 2011.

The last US operation in Libya was in 2014, when special forces captured Ahmed Abu Khattala, one of the alleged organizers of the attack against the US consulate in Benghazi in 2012 that killed Ambassador Chris Stevens and three other Americans.

The Libyan statement said the operation took place “after consultation with the Libyan transitional government” based in the eastern city of Tobruk.

Prime Minister Abdullah al-Thani voiced his “support”, saying the operation was “part of international aid that has long been sought in the fight against terrorism”.

Libya’s Lana news agency cited an official from the internationally recognized government as saying the strikes had targeted a farm south of Ajdabiya, some 160 kilometers (100 miles) west of Benghazi, as Belmokhtar was holding a meeting with leaders from other extremist groups including UN-listed terror organization Ansar al-Sharia.

Belmokhtar was previously thought to have been killed in Mali, but security sources told Agence France-Presse last year that he had moved into Libya.

Born in 1972 in Algeria, he said in a rare 2007 interview that he was drawn away from home by his fascination with the exploits of the mujahedeen combating the Soviet invaders of Afghanistan, whom he joined in 1991 when he was barely 19.

It was in Afghanistan that he claims to have lost his eye when it was hit by shrapnel, and where he had his first contact with Al-Qaeda.

He returned to Algeria in 1993, eventually joining the group that became Al-Qaeda in the Islamic Maghreb.

But he was pushed out as one of AQIM’s top two leaders in northern Mali for what one regional security official said were his “continued divisive activities despite several warnings”.

A Malian official cited AQIM as saying that Belmokhtar, whose nickname “Mr Marlboro” came from his reputation as a cigarette smuggling baron, had been “dismissed for straying from the right path”.

A scathing Al-Qaeda letter criticizing him hit the headlines in 2013 after it was found in the wake of French armed intervention Mali.

Belmokhtar founded his Al-Qaeda breakaway group “Signatories in Blood” group in 2012, later merging it with MUJAO, one of the jihadist groups that seized control of northern Mali in early 2012, to form the Al-Murabitoun group.

Along with the Algerian siege, Belmokhtar also claimed a double suicide bombing in Niger that killed 20 people in May 2013.

Al-Murabitoun last month said it had pledged allegiance to the Islamic State jihadist group – but Belmokhtar immediately distanced himself from the declaration and vowed continued backing for Al-Qaeda in what was interpreted as evidence of a serious power struggle within the organization.

Libya has descended into chaos since a NATO-backed revolt unseated longtime dictator Kadhafi in 2011. It has rival governments and parliaments, and powerful militias are battling for influence and a share of its oil wealth.

Jihadist groups have exploited the lawlessness, which has also prompted a huge influx of migrants trying to make the dangerous Mediterranean crossing to Europe, with shipwrecks leaving hundreds dead and the EU straining to respond. – Rappler.com