Jun 15, 2015 10:43 AM PHT
Rj Marco Lorenzo C. Parcon
Facebook Twitter Copy URL
Copied
[CIRSS Commentaries] Integrating women in peace operations is not only to mainstream gender equality in operations, but has a greater meaning in terms of safeguarding international peace and stability 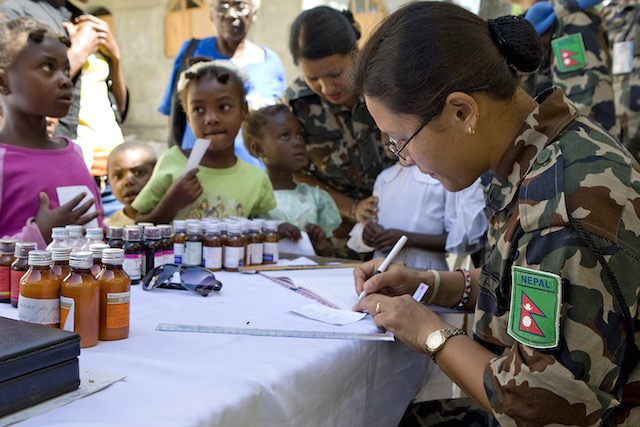 Two of the most important international instruments to further mainstream gender perspective in peace support operations are the Namibia Plan of Action on Mainstreaming Gender Perspective in Multidimensional Peace Support Operations, which touches upon several areas of the operation from negotiations, mandate creation, to trainings and public awareness, and UN Security Council Resolution 1325 which calls for, among others, an increased participation of women at every level of decision-making that concerns issues related to peace and security, and emphasizes the need and the UN’s willingness to incorporate a gender perspective in peacekeeping operations.

According to the UN, the adoption of Res. 1325 brought positive results in peace operations; and these were achieved through the establishment of gender units in peacekeeping operations and a Gender Adviser at the UN Headquarters; the inclusion of gender concerns in peacekeeping mandates; and the development of relevant policies and resources to further mainstream gender in peacekeeping missions and in pre-deployment trainings of Troop Contributing Countries.

Impacts of women integration and participation in peace support operations

The United Nations also noted that during the 1990s, women involvement in peace operations made up only a total of 1% of the total uniformed force. Taking into consideration SC Resolution 1325 and the need to mainstream gender in all areas of peace operations, UN Secretary-General Ban Ki Moon launched a campaign in 2009 to increase women police peacekeepers to 20% and 10% in the military service. However, the latest data provided by the UN noted that uniformed women personnel constituted roughly 3% of the military force and 9.5% of the police force. Though the target was not met, efforts to further increase women participation in peace support operations, including sending all-female battalions, has proven to have a positive effect to the society as in the case of deploying all-female peacekeepers in the UN Mission in Liberia. The Mission noted that there was a significant increase in women participation in the Liberian national police after the deployment of female peacekeepers as women involvement rose to 15% in 2009 – a 2% increase from 2008.

Integrating women in peace operations is not only to mainstream gender equality in operations, but has a greater meaning in terms of safeguarding international peace and stability. The UN Department of Peacekeeping Operations (UNDPKO) has pointed out the contributions of women peacekeepers in the host community, including forging a stronger partnership between men and women to achieve peace and stability, empowering women, addressing specific needs of women ex-combatants most especially during the demobilization and community reintegration process, and increasing interaction with women in the society, among others.

Moreover, the UN also points out that peace support operations play a significant role in the drive to have a more stable and secure environment. Therefore, these operations have a responsibility – to improve laws and institutions to be more gender equal, inclusive, and fair. In the greater context of human rights, mainstreaming will also bring about change not only in the approach used in peace operations, but can also greatly and positively impact on the lives of women and children.

It must be noted that gender equality in peace operations does not only denote increasing number of female personnel in all levels of the operations, but also enhancing the knowledge of current personnel, irrespective of sex, about the benefits of gender mainstreaming and the positive effects that it may carry towards society.

Engaging all actors involved is an imperative to reach the goal of having more gender sensitive peace operations. Therefore, men should likewise be perceived as partners in development and as partners to achieve a more humane and peaceful environment.

The 2014 Millennium Development Goals Report of the UN Development Program noted that the Philippines has a high chance of achieving MDG3 which is focused on gender equality and women empowerment. Moreover, the World Economic Forum’s 2014

Global Gender Gap Report also ranked the country as the ninth with the highest possibility of closing the gender gap in several areas including in the fields of economic participation and opportunity, and educational attainment. It must also be pointed out that the Philippines is the only Southeast Asian country included in the 10 highest-ranking countries.

The Philippines is regarded as one of the most active countries in the Asia and Pacific in terms of peace support troop contribution. According to the latest tally of UNDPKO, the country has contributed a total of 178 UN peacekeepers, making it the 4th among ASEAN Members States and 60th worldwide. It must be noted though that the Philippines has a total of only 10 women peacekeepers, which is approximately six percent of the total active force contributed for 2015.

Although the country still has limited resources and manpower to send more women peacekeepers, the Philippines is doing its best to further increase women participation in the field and ensuring that gender perspectives will be integrated both in the national and international levels.

To mainstream gender sensitivity and to curb gender-based violence, the Philippines has also instituted several pre-deployment training programs for the peacekeepers. Moreover, the country has collaborated with other TCCs especially in terms of training development and other relevant people to people exchanges.

In this regard, the Philippines was considered as the first country among the TCCs to appoint a woman as a contingent commander of a UN Peacekeeping Force as the Philippines sent Captain Luzviminda Camacho of the Philippine Navy as the head of a 156-strong Philippine force, 10 of which are female, for the peacekeeping effort in Haiti (MINUSTAH). She expressed during an interview that the country’s peacekeeping force are undergoing gender awareness prior to deployment and are given equal opportunity. Furthermore, Capt. Camacho was chosen to lead the force because she fulfilled the number one requirement of having command at sea. The aforementioned accomplishment of the Philippines signifies that gender sensitivity and gender mainstreaming are trickling down to all the processes made by the government, and that promotions are not based on sex, but based on merit.

Moreover, the Philippines has numerous gender sensitivity trainers and human rights experts that can aid not just in the pre-departure training of the troops, but also in the rebuilding process of the host state as they can further teach members of society the very foundation and importance of gender sensitivity and the link between gender and development. This may be an area where the Philippine Commission on Women and the Philippine Commission on Human Rights, other government organizations, various non-governmental organizations and members of the academe can be actively involved.

Gender perspective as a tool for equal development

Mainstreaming must not end in increasing awareness – it is just the start. Gender sensitivity and mainstreaming must trickle down to all policies and activities of the operations to the community that they are in, and must benefit all members of society irrespective of gender.

Ultimately, in the drive to integrate a gender perspective in peacekeeping and to further mainstream gender in the peace operations, the main reason for these must not be forgotten – to help rebuild a community which is safer for women and children, and a country that is committed to provide equal opportunities for men and women. – Rappler.com

RJ Marco Lorenzo C. Parcon is a Foreign Affairs Research Specialist with the Center for International Relations and Strategic Studies of the Foreign Service Institute. Mr. Parcon can be reached at rjcparcon@fsi.gov.ph.