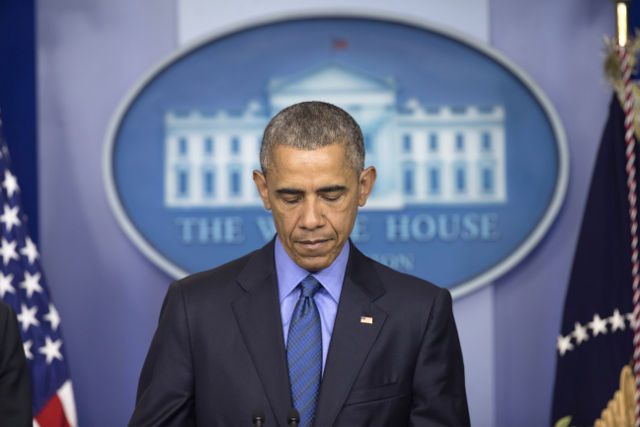 WASHINGTON, DC, USA – Barack Obama was clearly angry, but mainly frustrated. Once again he was speaking out after a murderous shooting spree, and once again he found himself powerless to act.

This time the pain was personal. The US president knew the pastor at the black church in South Carolina who was cut down along with 8 of his flock in an apparently racist attack.

But his anger was made all the worse by the knowledge that none of the previous series of mass shootings on his watch have pushed fellow Washington politicians to act.

“I’ve had to make statements like this too many times,” he said in brief remarks from the White House podium, flanked by an equally ashen-faced Vice President Joe Biden.

“Once again, innocent people were killed in part because someone who wanted to inflict harm had no trouble getting their hands on a gun,” he complained.

Mass shootings are not a uniquely American phenomenon, but culturally similar countries like Australia and Britain tightened gun laws after massacres and seem to have saved lives.

Many in the United States see the Second Amendment to the Constitution, which protects the right of citizens to bear arms, as a bar to any limitations on gun ownership.

And on Capitol Hill many lawmakers on both sides of the aisle support gun ownership or at least respect the power of the industry lobby and the depth of feeling among gun enthusiasts.

“Now is the time for mourning and for healing, but let’s be clear: At some point we as a country will have to reckon with the fact that this type of mass violence does not happen in other advanced countries,” Obama said.

“It doesn’t happen in other places with this kind of frequency. And it is in our power to do something about it.”

It was telling that he used the phrase “our power,” after seven years, and a half a dozen massacres, Obama knows that his power alone will not be enough to change the debate.

In 2013, after the December 2012 slaughter of 26 people – including 20 young children – at a Connecticut school, Obama took 23 executive decisions to tweak gun rules.

The public was briefly in a state of shock, and some commentators thought a turning point had been reached, but an attempt to bring a broad gun control bill to Congress failed.

Barely 4 months after the Sandy Hook school massacre, Congress rejected a bill that would have required tougher background checks for licenses and ban sales from gun fairs.

The president called the failure a “day of shame” and blamed the gun industry lobby.

Now, with Obama nearing the final year of his presidency and candidates jockeying to replace him, he is realistic about how much political capital he has left to spend.

“I don’t think the president is anticipating Congress moving on this anytime soon,” Schultz said.

“But that doesn’t mean that this isn’t a moment for Americans to realize the urgency of this issue and to acknowledge it.”

Obama is used to defeat on this issue, but the latest massacre may be one of the hardest to bear, striking at the heart of the African American experience in South Carolina.

He knew the slain pastor, Clementa Pinckney, and every historian of the struggle of former African slaves knows the Emanuel African Methodist Episcopal Church in Charleston.

“Mother Emanuel is, in fact, more than a church. This is a place of worship that was founded by African-Americans seeking liberty,” he said, struggling to contain his fury. – Jérôme Cartillier, AFP/Rappler.com