US church reopens in triumph over massacre 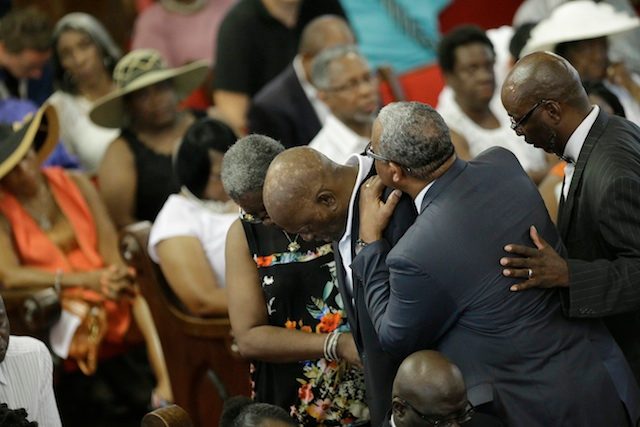 CHARLESTON, United States (UPDATED) – The historic black South Carolina church where a white gunman murdered 9 African Americans held its first service since the massacre on Sunday, June 21, an emotional gathering celebrating the lives of those slain.

Several hundred congregants, some tearful, packed the Emanuel African American Episcopal Church for a service led by visiting clergy because the congregation’s pastor was among those killed by a young white supremacist.

The service offered still-grieving Charleston – in another era, the American capital of the transatlantic slave trade – a chance to mark what many argued was its triumph in thwarting the shooter’s reported aim to foment racial hatred.

Celebrants at Emanuel church said the accused gunman – Dylann Roof, 21, from a rural town near the state capital Columbia – had failed miserably in his quest to break their spirit of love and faith.

“There they were in the house of the Lord, studying your word, praying with one another,” said visiting minister John Gillison from the pulpit.

“But the Devil also entered. And the Devil was trying to take charge,” he said.

Crowd in the street

The crowd spilled out into the street, where loudspeakers relayed songs and sermons from the two-hour service live to hundreds of worshippers braving brutal summer heat.

A website allegedly created by Roof emerged Saturday featuring a 2,500-word racist screed against African Americans, in which he appears in photos holding guns and the Confederate flag, and burning the Stars and Stripes.

Roof went on the run after the shooting and was caught a day later in neighboring North Carolina. He is held in solitary confinement charged with nine counts of murder.

Authorities are treating the shooting – which took place during an evening Bible study – as a hate crime and also investigating it as a possible act of domestic terrorism.

The attack on Emanuel – one of the most renowned African American houses of worship in the United States – was the bloodiest on a black church since the civil rights era.

His usual seat on the pulpit was left empty, covered by a black cloth. His funeral is set for Friday, June 26.

The picturesque white brick Gothic church with its towering steeple is known by many as “Mother Emanuel” because of its prominence in the community and a fabled history dating back to the slavery era.

The service was at times somber, at times jubilant, as the mostly black church members – flanked by scores of white visitors, showing their solidarity – raised their voices in song, clapping and swaying in rhythm.

Some cried. Others held hands. Many waved fans in hopes of keeping the stifling heat at bay.

Sitting among them was South Carolina Governor Nikki Haley, a Republican who is resisting calls to remove the Confederate flag from the lawn of the state legislature.

Some see the Civil War era saltire as a symbol of Southern pride and heritage, but others argue it harks back to days of white supremacy and is now fit only for a museum.

Later, worshipers said the service helped to provide them with much-needed solace.

“It was joyous. You just felt God’s spirit there,” said Tanosha Bosier, 40, a teacher’s assistant in Charleston who attended Emanuel as a child and brought along her 14-year-old son Ashton and daughters Autumn, 10, and Avery, 8.

Ryan Shepard, 28, who traveled hours from Atlanta, Georgia to be there, said he left the service with a strong sense of the church’s resolve.

“The history of this church suggests that nothing is going to stop them from moving forward,” said Ryan, a community activist and advisor to Atlanta Mayor Kasim Reed.

Roof is alleged to have shot the 6 women and 3 men in the church basement, with the victims ranging in age from 26 through 87, and that he then stood over a survivor to make a “racially inflammatory” statement.

On Friday, June 19, Roof appeared via video link in Charleston County bail court where he heard relatives of the dead offer him their forgiveness.

Many Americans were moved by the act of magnanimity, and observers said it represents the generous spirit of the survivors, devout in their Christian beliefs.

“It speaks to the faith that is taught in the church across the street and the faith that Americans hold dear in their hearts,” Cornell William Brooks, the head of the leading US civil rights group the NAACP told CBS News.

“But it’s not enough to forgive and love, we have to also hold accountable, we have to also say to this young man and to those who may have influenced him, we are not allowing to you corrupt our democracy.” – Robert Macpherson, AFP / Rappler.com