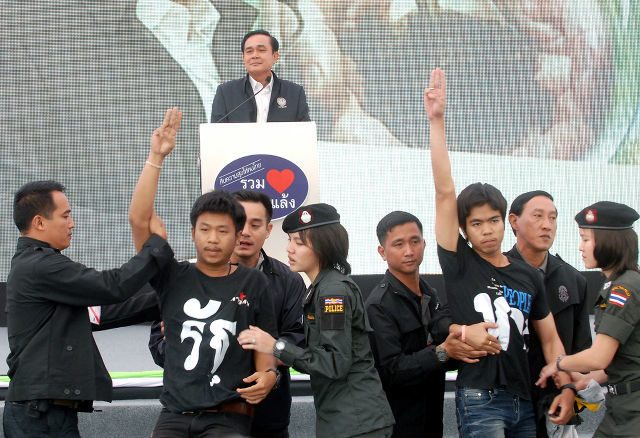 Facebook Twitter Copy URL
Copied
The students, charged with 'violating national security,' are among the few activists that have dared to publicly challenge Thailand's military rulers

BANGKOK, Thailand – Fourteen Thai students were taken into custody Saturday, June 27, after staging an anti-coup rally on charges that could see them jailed for 7 years, as the ruling junta tightens its chokehold on dissent.

The pro-democracy campaigners are among the few activists that have dared to publicly challenge Thailand’s military rulers, who imposed severe curbs on civil liberties after seizing power from an elected government last year.

Their arrests Friday followed a peaceful protest calling for an end to junta rule a day earlier at Bangkok’s Democracy Monument, where spirited speeches and songs were met with claps and cheers from dozens of supporters.

Political gatherings and criticism of the junta have been banned under the military regime and on Saturday Thailand’s army chief starkly warned backers of the students to end their support.

The 14 activists – university students in their 20s including one woman – were taken to a remand prison in northern Bangkok in the early hours of Saturday, Colonel Chumphol Chanchanayothin, superintendent of a police station in the capital’s old quarter, told Agence France-Presse.

They were each charged with “violating national security”, he told Agence France-Presse, an offense under section 116 of Thailand’s criminal code that carries up to 7 years in jail. Lawyers for the activists and rights groups have described the charge as “sedition.”

The students are also charged with breaching the junta order against public gatherings but “face a maximum of 7 years in jail,” Chumphol said.

After the charges were filed the activists were taken to Bangkok’s military court late Friday, which was surrounded by scores of their friends and supporters, Kunthika Nutcharut, part of the legal team representing the students, told Agence France-Presse.

“They refused bail as they don’t recognize the authority of the military court,” she said.

Speaking to reporters Saturday, Army Chief Udomdej Sitabutr issued a firm warning to any supporters of the detained activists in comments that just stopped short of threatening further arrests.

“Those who support them must stop. We know all of your names,” he said.

The 14 students belong to groups that have staged small but symbolic acts of anti-coup protest including raising the 3-fingered salute from “The Hunger Games” films and publically reading George Orwell’s anti-authoritarian novel “Nineteen Eighty-Four” – actions that have triggered arrests.

Sunai Phasuk of Human Rights Watch told Agence France-Presse the use of the 116 charge reflected “a serious escalation of repression” under the junta and showed it had “no intention” of returning democracy to the country.

“This is the most heavy-handed response by the military regime to peaceful assembly yet,” he said.

“There is no space to express disagreement… what is waiting for Thailand is a deepening of dictatorship,” he said, as the rights group called for all charges against the students to be dropped and their immediate release.

Last month 7 of the 14 charged had participated in a prominent anti-coup rally to mark one year since the takeover in the capital, quashed only when police dragged away and held overnight dozens of students in angry scenes.

The other half of the detained group, who study in the northeastern city of Khon Kaen, staged a similar rally last month and have been dubbed the “Magnificent Seven” on social media.

One of the activists from last month’s protest in Bangkok was charged with illegal assembly, carrying a maximum jail term of 6 months, on Wednesday, June 24. Also that day, the students who were charged Friday filed complaints against police alleging maltreatment by authorities back in May.

Police did not charge the group of 14 then and unusually held back from the protest at Democracy Monument, which the activists draped with black banners and stickers saying “no coup.”

Instead authorities arrested them late Friday afternoon, hours after encircling the house where they had been seeking refuge.

Thailand’s generals claim the May 2014 coup was essential to restore order after months of often violent protests against the elected government of Yingluck Shinawatra.

But opponents say it was the latest manoeuvre by Bangkok-based royalist elites, backed by large swathes of the military, to scupper democracy.

The coup was the latest crisis in the country’s bitterly divided politics that roughly pits the capital elites against working-class voters in the northern provinces who are loyal to the Shinawatras.

The Shinawatras’ parties have won every election since 2001 and are known for their pro-poor policies.