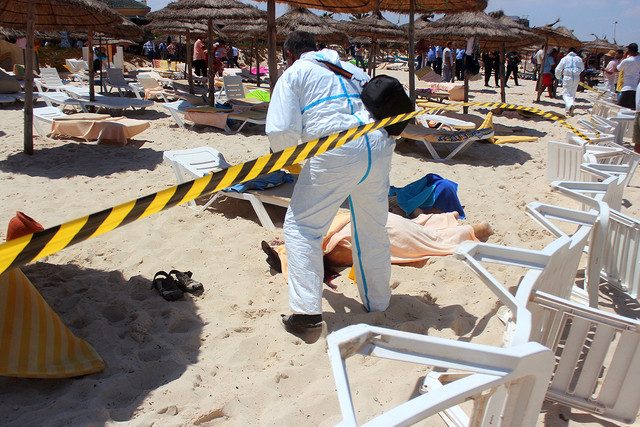 LONDON, United Kingdom – Britain said Saturday, June 27, that at least 15 of its citizens were killed in the attack on a Tunisian beach resort, its worst loss of life in a terror incident since the 2005 London bombings.

“Sadly I can confirm that at least 15 British nationals were killed in yesterday’s atrocity,” said Foreign Office minister Tobias Ellwood.

“But I should stress that the number may well rise as several more have been seriously injured in this horrific attack.”

At least 38 people were killed on Friday when a Tunisian student disguised as a holidaymaker opened fire at a resort in Port el Kantaoui just north of Sousse, about 140 kilometers (90 miles) south of Tunis.

“This is the most significant terrorist attack on British people since 7/7 and highlights the ongoing threat of ISIL,” Ellwood told reporters.

Some 52 people were killed when 4 suicide bombers attacked London’s transport system on July 7, 2005.

Earlier, Tunisian authorities put the British toll at 8 but Prime Minister David Cameron had urged the public to “be prepared for the fact that many of those killed were British.”

Officers were also interviewing many of the British holidaymakers who flew home on Saturday, in particular looking for any phone footage taken of the incident.

About 20,000 British tourists are currently on package holidays in Tunisia, according to ABTA, the country’s largest travel association.

The TUI group, which includes travel firms Thomson and First Choice, sent 10 planes on Saturday to repatriate about 2,500 customers, and said it was cancelling all its holidays to Tunisia for the next week.

Cameron promised his government would “do everything necessary to get people home” and was providing consular assistance, while experts from the Red Cross had also been sent to the north African country.

The attack dominated front pages in all of Britain’s newspapers on Saturday, with headlines such as “Slaughter on the beach” accompanying stark photographs of bodies lying in the sand covered by beach towels.

The shooting was the deadliest in Tunisia’s recent history and the second attack on tourists in the country within 3 months.

Cameron on Saturday chaired a meeting of the government’s Cobra emergency committee, the second time the group had met in as many days.

He has also spoken to the Tunisian president and Chancellor Angela Merkel of Germany, home to a number of the victims, as well as to French President Francois Hollande and the emir of Kuwait.

“These savage terrorist attacks in Tunisia, Kuwait and France are a brutal and tragic reminder of the threat faced around the world from these evil terrorists,” he said.

Cameron said the victims in Tunisia were “innocent holidaymakers relaxing and enjoying time with their friends and families”.

“These terrorists will not succeed, for as much as they try to divide people they will only unite us more strongly in our determination to defeat these Islamist extremists and all they stand for,” he said.

Britain’s terrorism threat level is currently at severe, the second highest of five meaning an attack is highly likely.

However, security was stepped up at major public events this weekend, including armed forces day celebrations attended by Cameron and London’s gay Pride march.

“The events of Tunisia, the events in France and the events in Kuwait have led us to review those plans across the country and take the necessary steps,” he said. – Alice Ritchie, AFP/Rappler.com