Greece on the brink after Europe refuses bailout 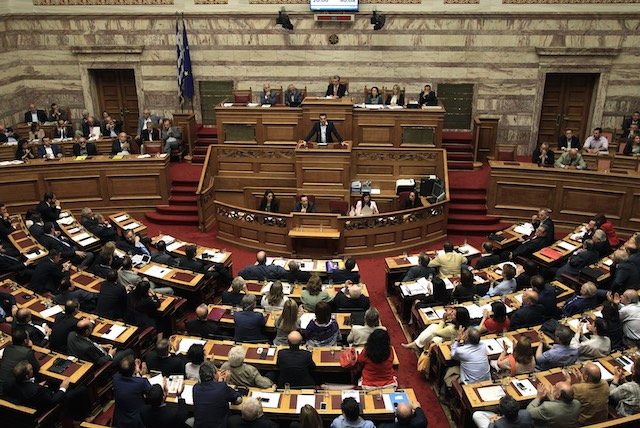 Facebook Twitter Copy URL
Copied
(UPDATED) Greek Prime Minister Alexis Tsipras says he is confident that 'the Greek people will say an emphatic no to the ultimatum' by the country's EU-IMF creditors, but 'a big yes to European solidarity'

BRUSSELS, Belgium (2nd UPDATE) – Greece hurtled closer to a possible exit from the eurozone on Saturday, June 27, after Europe responded to the government’s call for a referendum by refusing to extend Athens’s desperately needed bailout.

The referendum on bailout proposals by Greece’s creditors planned for July 5 was approved by the parliament late Saturday night, with at least 179 deputies out of 300 voting in favor.

In a speech before the vote, leftist Prime Minister Alexis Tsipras said he was confident “the Greek people will say an emphatic no to the ultimatum” by the country’s EU-IMF creditors, but “a big yes to European solidarity”.

The proposed referendum would ask Greeks to say “yes” or “no” to the measures submitted by creditors to Athens on Friday at one of the final rounds of negotiations ongoing on since late February.

Long queues formed at cash machines across Greece on Saturday, as fears mounted capital controls may be introduced as Athens looked all but certain to default on a huge IMF payment due on Tuesday, June 30.

The European Central Bank is set to meet on Sunday, June 28, amid fears Greece’s banks will be unable to open next week, while Germany said the eurozone would do “everything” to stop contagion spreading through the single currency.

Tsipras announced the surprise referendum in the early hours of Saturday saying he had rejected a debt deal because it involved further austerity measures that would cause “humiliation” to the Greek people.

Angry eurozone finance ministers accused Greece of “unilaterally” breaking off talks and said they would not extend Greece’s bailout past June 30, the same day a 1.5 billion euro ($1.7 billion) payment to the International Monetary Fund falls due.

“It was not us who walked away from the talks, it was the Greek government that walked away,” a grim-faced Eurogroup president Jeroen Dijsselbloem said after tense talks in Brussels.

But he added: “Our door is always open.”

‘Greece remains in the euro’

EU heavyweights Germany and France swiftly insisted Greece would remain inside the 19-country eurozone, even as fears grew about the future of the single currency itself.

His French counterpart Michel Sapin said that Greece’s “destiny” was in the euro.

But with fears that the crisis could spread, the ministers later met without Greece to discuss the “consequences” of a possible “Grexit” and to insist they would “preserve the integrity and stability of the euro area” Dijsselbloem said.

“We will do everything to fight against any possible danger of contagion,” added Schaeuble in an attempt to calm global markets before they reopen on Monday.

Frozen out of the talks, Greek Finance Minister Yanis Varoufakis left saying: “It’s a sad day for Europe, but we will overcome it.”

But he added that the refusal to grant his request to extend the bailout “will certainly damage the credibility for the Eurogroup as a democratic union and I am very much afraid the damage will be permanent”. 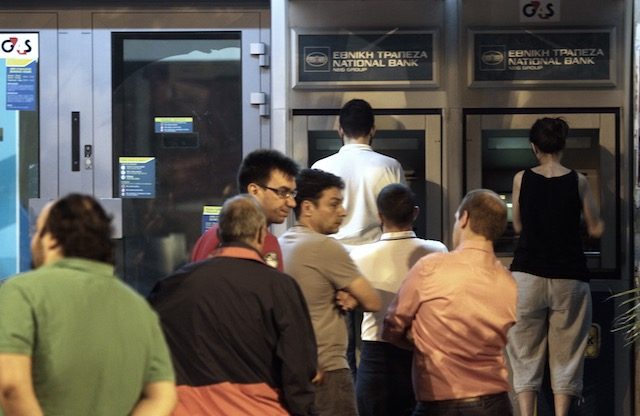 Greece’s negotiations with its international creditors have dragged on since January, when Tsipras’s Syriza party first took power on a promise of ending austerity measures demanded by the EU and IMF in return for two bailouts worth 240 billion euros.

Syriza has repeatedly refused to make cuts to pensions and changes to the VAT system demanded by Greece’s debtors – the “troika” of the European Commission, European Central Bank and International Monetary Fund.

A week of intensive talks in Brussels ended with Greece’s creditors on Friday, June 26, offering Athens a 5-month, 12-billion-euro extension of its rescue program, on condition it committed to fresh reforms.

According to two polls published in the Sunday press, carried out just before the referendum was announced, a large majority of Greeks favored a deal with the creditors.

Greece was stunned by the referendum announcement by radical leader Tsipras, which came just hours after he had been at a summit with European leaders in a bid to end the crisis.

Queues built up at cash machines in Athens as fears mounted that the banks would not open on Monday and the government could impose capital controls to stop more deposits fleeing the country.

ATMs in the Greek parliament ran dry while in Greece’s second city, Thessaloniki, some banks have run out of money, according to an Agence France-Presse reporter.

“I have a shop. I came to the bank to withdraw as much money as I can in order to cover the needs of my shop for next week,” 42-year-old Maria Kalpakidou told Agence France-Presse.

Demand at petrol stations was also said to have “heightened” but there were no fuel shortage problems, according to state news agency ANA.

The European Central Bank will now play a crucial role in ensuring Greece’s banks have the cash to open at the beginning of next week, as with the end of the bailout program Greece leaves behind billions of euros in profits on its government bonds.

The governing council of the ECB was also reported to be meeting on Sunday, and was “closely monitoring developments”, the bank said. – Danny Kemp and Alex Pigman, AFP / Rappler.com