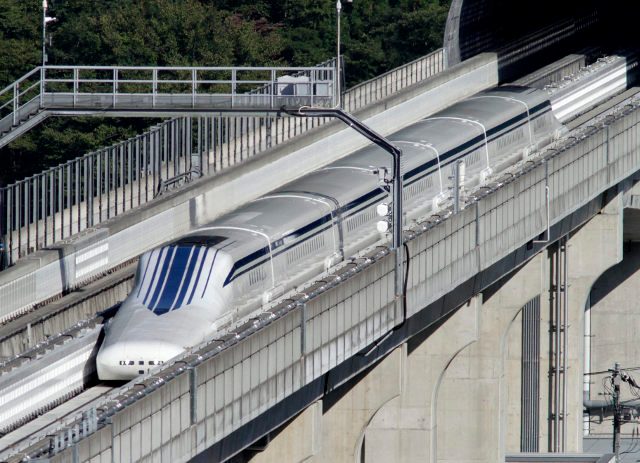 Facebook Twitter Copy URL
Copied
(2ND UPDATE) Media reports the driver of the 300-kilometer-per-hour train, which had around 1,000 passengers on board, found the still-burning body of the man after the emergency stop

TOKYO, Japan (2ND UPDATE) – A man set himself on fire on board a moving bullet train in Japan Tuesday, June 30,  killing himself and one other person, in an unprecedented incident on a network with an enviable safety record.

Several other passengers had to be treated for smoke inhalation after the man doused himself in flammable liquid and lit a cigarette lighter on the train as it hurtled through the countryside around 70 kilometers (45 miles) southwest of Tokyo.

The Yomiuri Shimbun daily said a blast was heard from a toilet stall at the front of the train, filling the front carriage with choking white smoke, and provoking an emergency stop.

Media reported that the driver of the 300-kilometer-per-hour train, which had around 1,000 passengers on board, found the still-burning body of the man after the emergency stop.

“We have been informed that there was a passenger in a car on the train who covered him or herself with oil and set it on fire,” a spokesman for operator JR Central told AFP.

The train involved in Tuesday’s incident — a super-fast Nozomi bullet train — was travelling from Tokyo towards Osaka, when the blaze erupted near Odawara, southwest of the capital.

“We received information indicating that a fire broke out near a toilet and two people were in cardiopulmonary arrest,” a spokesman for Odawara Fire Department said. The term is often used by first responders in Japan, who are unable to officially certify someone as dead.

NHK reported the two dead were found on the floor of the front car, but at opposite ends of the carriage.

Broadcaster NTV said the dead man was 71-years-old, while local officials said the other deceased was a woman.

An official at the local disaster prevention office said one man remained in a serious condition, while three others were badly hurt.

The national Disaster Management Agency said about 20 others had to be treated for the effects of smoke inhalation.

Television pictures showed all the doors on the stationary train were open and passengers were being carried out on stretchers.

Prime Minister Shinzo Abe set up a task force to respond to the incident, his office said, and all bullet trains running between Tokyo and Nagoya were suspended.

The motive behind Tuesday’s public suicide was not immediately clear, but self immolations are relatively rare in Japan, a country where the culture of political protest is subdued.

Mental illness carries a considerable stigma, and critics say support networks for those suffering from psychological illness are inadequate.

In November 2014, a man reportedly burned himself to death at a park in the heart of Tokyo in an apparent protest against Japan’s controversial move to expand the role of its military.

Another man also set himself ablaze June 2014 on a pedestrian walkway in Shinjuku, one of Tokyo’s busiest districts, after giving a speech opposing Abe’s plan to reform the country’s pacifist constitution.

Japan’s ultra-efficient shinkansen train network connects cities along the length and breadth of the country.

Despite the huge volume of passengers it serves, the network operates with an enviable punctuality rate. It also has an unparalleled safety record, with no one ever having been killed in a crash in its half century of service.

The first service connecting Tokyo and the western commercial hub of Osaka, some 500 kilometres away, began in 1964, as Japan prepared to host the Olympic Games.

An average of more than 400,000 passengers use the service daily, travelling at speeds of up to 300 kilometres per hour, with around 300 trains running in both directions each day.

When the system marked its 50th anniversary last year, the Tokyo-Osaka line had carried a total of 5.6 billion passengers, with trains travelling a cumulative 2 billion kilometers, enough to circle the globe 50,000 times. – Harumi Ozawa, AFP/Rappler.com