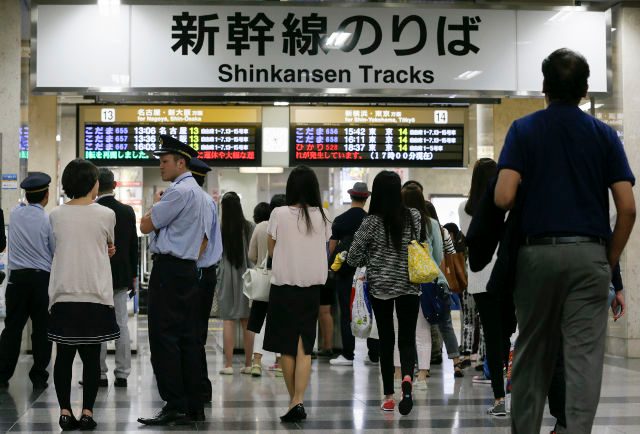 Facebook Twitter Copy URL
Copied
Yoshiko Kuwahara writes on her Facebook page that she is 'visiting Ise shrine to give thanks for my calm, peaceful life' on the day she died

TOKYO, Japan – A woman killed when a pensioner deliberately set himself on fire aboard a moving bullet train in Japan was on her way to a shrine to give thanks for her “peaceful life”, it emerged Wednesday, July 1.

Yoshiko Kuwahara died after 71-year-old Haruo Hayashizaki doused himself in fuel and sparked the blaze on the busy 300-kilometre (185-mile)-per-hour train.

“Today I’m visiting Ise shrine to give thanks for my calm, peaceful life,” 52-year-old Kuwahara wrote on her Facebook page on Tuesday morning as she boarded the super-fast Nozomi bullet train at Yokohama.

Ise shrine is one of the most sacred spots in Japan’s native Shintoism, and a major tourist draw.

The train, packed with more than 800 passengers, was travelling from Tokyo to the commercial hub of Osaka when witnesses reported a blast in the front of the first carriage.

Plumes of choking, white smoke sent passengers fleeing down the train as it screeched to an emergency stop.

Reports said the driver rushed back into the smoke-filled carriage and tried to douse Hayashizaki’s still-burning body.

Footage from inside the train shot immediately after it stopped showed smut-stained passengers blinking and coughing as they crawled through thick smoke to the exits, some clutching small children.

As well as the two deaths, 26 people were hurt in the incident, authorities said.

Police on Wednesday raided the dead man’s Tokyo home on the hunt for clues about his motive.

The Sponichi tabloid reported Hayashizaki, who lived alone, had complained to neighbours he “would not be able to live properly because his pension was small”.

But the reason for choosing such a public suicide – one that could have had disastrous consequences for those on board the bullet train – remained a mystery.

Self-immolations are relatively rare in Japan, a country where the culture of political protest is subdued, although there were two attempts – one successful – in 2014.

Both were men apparently protesting what they saw as the “militarization” of Japan under nationalist Prime Minister Shinzo Abe.

Hayashizaki’s dramatic suicide has shocked Japan, where acts of public violence are extremely rare, and has led to calls for stepped up security on the vast bullet train network.

But many members of the public were reacting with overwhelming sympathy for 52-year-old Kuwahara, an innocent bystander caught up in someone else’s violence.

On her profile, Kuwahara, a chiropractor, said her dream was “to become a person who treats people’s minds and bodies”..

“I’d like offer my heartfelt prayers. Why did you have to get wrapped up in this? It’s terrible,” one of 2,500 messages left on her Facebook page said.

“I’m really sorry you were involved in an incident caused by a selfish person. I hope there will be no such painful event in the future,” another wrote. – Natsuko Fukue, AFP/Rappler.com