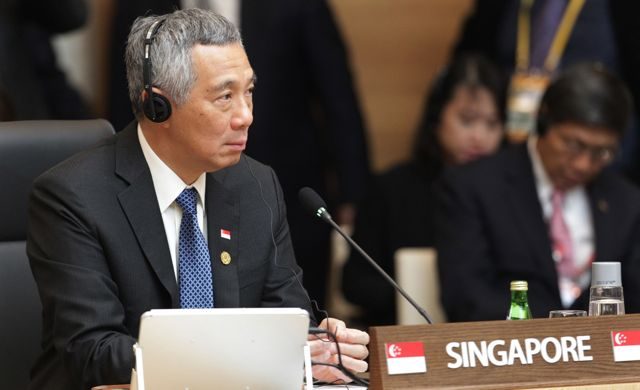 SINGAPORE – Singapore Prime Minister Lee Hsien Loong insisted he was defamed and sought aggravated damages on Wednesday, July 1, from an activist who grilled the leader in court for seven hours as part of a civil case.

Lee said the defendant, Roy Ngerng, had been “insincere” in his apologies and continued to worsen his original libel by repeating false allegations in blogs and a YouTube video clip.

Lee sued Ngerng in May 2014 after the blogger accused him of misusing public funds, a sensitive issue for officials in the city-state known to have the least corrupt government in Asia.

“You have defamed me,” Lee, 63, firmly told Ngerng from the witness stand at one point during a cross-examination at the High Court punctuated by testy exchanges, sarcasm and some amusing ripostes.

The court had already ruled that a blog posted by Ngerng on May 15 last year was defamatory. The latest hearing, slated for three days, is being held to assess how much money should be awarded to Lee, including aggravated damages.

Lee’s lawyers said the offending blog suggested that the prime minister, who is also the chairman of state investment fund GIC, had misappropriated cash from the state pension fund.

Lee filed the defamation suit – the first brought by a Singapore leader against an online critic — in the High Court, where the typical minimum value of damages claims is Sg$250,000 ($200,000).

He had earlier rejected an apology and dismissed as “derisory” a compensation offer of Sg$5,000 from Ngerng.

The activist on Wednesday told the court he accepted the judge’s earlier ruling that his original post was defamatory, but tried to prove an absence of malice.

He reminded Lee that he had issued several letters of apology and asked the prime minister if he would give him a second chance.

The Singaporean leader however said Ngerng’s conduct showed he was not sincere.

Lee also rejected Ngerng’s assertion he was being persecuted politically for raising questions about the Central Provident Fund (CPF), saying the activist and other Singaporeans were free to discuss the issue.

Lee said Ngerng’s posts on the CPF before May 15 had already come close to being defamatory.
He said he only decided to sue Ngerng when he read his May 15 post and after consulting his lawyers.

“I could not let it pass,” he told the court, adding he was “very indignant.”

Lee said he could have forgone seeking aggravated damages had Ngerng been sincere in his apologies and not repeated the allegations. “All I needed was one good apology,” Lee said, indirectly telling the blogger it was too late for a settlement.

The local media in Singapore is tightly controlled, leaving amateur bloggers as the strongest critics of the long-ruling People’s Action Party.

Media firms like Bloomberg, The Economist and the Financial Times have previously paid damages and apologised to Singapore leaders including Lee and his father, the late former prime minister Lee Kuan Yew, for publishing articles found to be defamatory.

The Lees and other ruling party leaders say the lawsuits are necessary to protect their reputations from unfounded attacks.  – Rappler.com