Obama to unveil deal with Cuba to reopen embassies 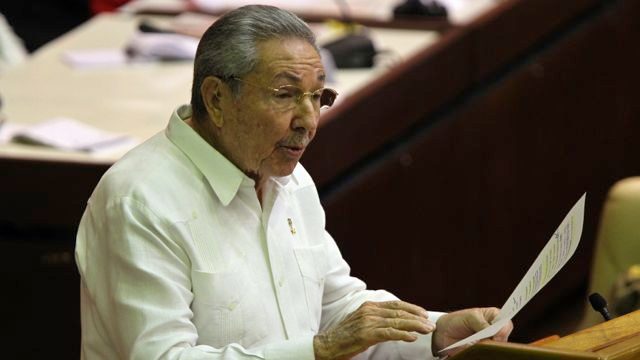 Facebook Twitter Copy URL
Copied
(UPDATED) Reopening of the embassies, which Obama is expected to announce at roughly 11:00 am local time, marks the end of a more than 50-year rupture in relations

HAVANA, Cuba (UPDATED) – US President Barack Obama was set to announce on Wednesday a landmark deal to re-establish full diplomatic relations with Cuba, severed 54 years ago in the angry heat of the Cold War.

Obama will unveil plans for the re-opening of the US embassy in Havana and Cuba’s embassy in Washington, marking a major foreign policy win for his presidency.

The United States could have a fully accredited “Man in Havana” as soon as July 20, according to Cuban authorities.

The head of the US interests section in Havana, Jeffrey DeLaurentis – tipped by some to become the ambassador – on Wednesday, July 1, handed Cuban diplomats a letter from Obama to President Raul Castro.

The missive “confirms the decision to restore diplomatic relations between the two countries and open permanent diplomatic missions in their respective capitals, from July 20,” Cuba’s foreign ministry said on its website.

President Dwight Eisenhower shuttered the embassy on January 3, 1961 after Fidel Castro came to power in Cuba and quickly forged ties with the Soviet Union.

The closure foreshadowed epoch-making conflagrations at the Bay of Pigs and over Russian nuclear missiles sites in Cuba.

Obama has argued the decades-old policy of isolating the Communist-run island has failed and is a relic of a long-gone era.

After 18 months of secret talks between Havana and Washington – and aided by the Vatican – the two countries agreed in December to begin warming relations.

The pair held a historic meeting in Panama in April – the first sit-down between leaders of the US and Cuba since 1956.

Travel and communications restrictions between the two countries have been significantly eased.

In May, the United States paved the way for further rapprochement by taking Cuba off the list of state sponsors of terrorism.

Havana had vehemently protested its 1982 inclusion on the blacklist, which hampered its access to global markets.

But powerful Cuban-Americans oppose restoring ties with Havana’s government and could yet pose problems for further rapprochement.

Republican presidential candidates who have ties to Cuba, including Marco Rubio and Ted Cruz, have been outspoken in their opposition to the thaw.

Rubio, a senator from Florida, accused Obama of giving concessions as Cuba continued to stifle democracy.

“It is time for our unilateral concessions to this odious regime to end,” he said.

“I intend to oppose the confirmation of an ambassador to Cuba until these issues are addressed.”

The island is still subject to a US trade embargo dating back to 1962 that only the Republican-dominated Congress can lift.

Obama’s supporters, like the Washington Office on Latin America, say the move will help improve ties with the whole of the region.

“It’s a long overdue policy change, and opens up the prospects for practical collaboration while allowing us to discuss our differences in a serious way,” said the group’s program director, Geoff Thale.

On Tuesday, Obama’s efforts were hailed by visiting Brazilian President Dilma Rousseff who described better US-Cuba relations as “a very decisive milestone and point in time in US relations with Latin America.”

“It is really about putting an end to the last lingering vestiges of the Cold War, and it ultimately elevates the level of the relations between the US and the entire region,” she said.

She said Obama’s move was a “gesture to all of Latin America and also to world peace at large. It is an important example of relations to be followed.”

The White House has said that a presidential visit is possible before Obama leaves office in 2017. – Rappler.com