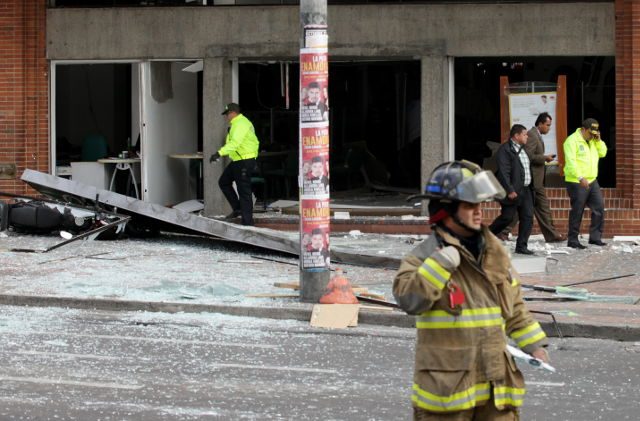 BOGOTA, Colombia – Two minor blasts have rattled the Colombian capital Bogota and injured at least 10 people, amid an uptick in violence and strains in negotiations to end the country’s internal conflict.

The first blast hit in the financial heart of Bogota at about 3:45 pm (2045 GMT) on Thursday, July 2, the fire department said on Twitter, reporting a second explosion moments later at an industrial area.

None of the 10 were badly injured but Defense Minister Luis Carlos Villegas branded the blasts “terrorist acts, no doubt.”

The government is in negotiations with rebel groups in Cuba to end the nation’s 51-year-old conflict.

The talks have frayed recently, and there has been a surge in guerilla violence.

“We will continue to fight terrorism with the Constitution in one hand and the military offensive in the other, as we have been doing with important results,” said Santos, who was in Peru for a conference.

The explosion in the financial district smashed windows and caused panic, according to an Agence France-Presse (AFP) reporter.

“It made a very loud noise,” said Argemiro Sanchez, 52, a street vendor.

The injured were rushed to a hospital and Villegas announced a reward of 100 million pesos (about $38,000) for information leading to the capture of those responsible.

Between February and March at least 6 minor blasts went off in different parts of the Colombian capital, leaving a dozen injured.

The explosions were blamed on a criminal gang that operated for the National Liberation Army (ELN), Colombia’s second-largest guerrilla group which is currently in preliminary peace talks with the government.

Colombia is facing an increase in attacks by rebels on infrastructure and government forces, mainly in more rural areas.

The attacks spiked after the Marxist FARC, the country’s largest rebel group, ended its unilateral ceasefire it had declared as part of peace talks. The government also resumed airstrikes in April.

The FARC killed four soldiers and wounded another six last month when it set a landmine that exploded when a military helicopter landed on it, officials said.

Peace talks between the government and the FARC have advanced on a number of major issues, but a final accord remains elusive.

More than 200,000 people have been killed in Colombia’s civil conflict since the FARC (Revolutionary Armed Forces of Colombia) was launched in 1964.