Facebook Twitter Copy URL
Copied
For 150 yuan ($24.50) each, hundreds of tourists head to Yanqi Lake, the site of the APEC Economic Leaders' Meeting in northeastern Beijing

BEIJING, China – A grand lakeside venue in Beijing, China, has become one of the city’s latest tourist attractions after it hosted leaders of 21 economies in November 2014.

Every day, hundreds of tourists flock to the site of the 22nd Asia-Pacific Economic Cooperation (APEC) Economic Leaders’ Meeting in northeastern Beijing.

On June 27, the Chinese foreign ministry brought Filipino and Thai journalists to this place – the Yanqi Lake International Convention Center – as part of a program for online journalists. (READ: China urges trade with PH across ‘sea of peace’)

The seats in this conference hall, our tour guides told us, had been custom-built for each APEC leader. The bigger the person, the bigger the seat. 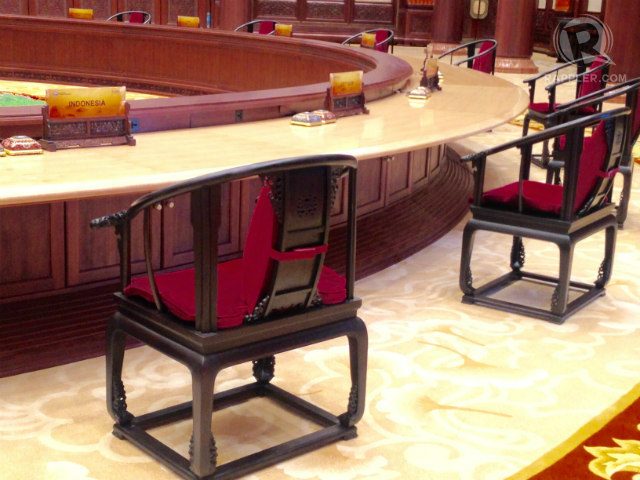 The leaders met against the backdrop of an intricately-crafted sculpture of the Great Wall of China, a symbol of China’s might across two millennia. Outside the conference hall, tourists enjoy the view of the Yanqi Lake, which  attracts migratory birds. Only 400 tourists can enter the venue every day, China Radio International (CRI) reported.

The APEC venue is open from Wednesday to Sunday, CRI added. Of course, not to be missed is the garden of trees planted by APEC leaders. Chinese state-run CCTV said this symbolizes “friendship in the APEC family.”

One of the trees was planted by the Philippines’ Aquino. It’s extra special because he met with China’s Xi on the sidelines of the tree-planting activity – Aquino’s first “direct contact” with a Chinese leader after Manila filed a historic arbitration case against Beijing over the South China Sea. (READ: Aquino’s Chinese ancestry fuels anger in Beijing) The Philippines is hosting the APEC Summit in 2015.

The chief organizer of the APEC Summit in the Philippines admitted, in an earlier interview with Rappler, that Manila can’t compete with Beijing in grandiosity.

APEC organizer Philippine Ambassador Marciano Paynor Jr, however, said the Philippines “will make sure their stay is hassle-free and that they leave with good memories.” – Rappler.com