Now is the time to strike Iran deal, Kerry warns 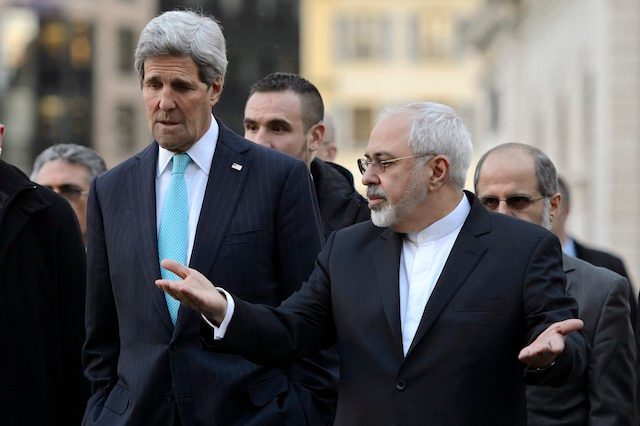 Facebook Twitter Copy URL
Copied
Kerry stresses that after almost two years of negotiations and on the ninth day of these latest talks, "genuine progress" has been made

VIENNA, Austria (UPDATED) – US Secretary of State John Kerry said Sunday, July 5, it was “now time” to seal a historic nuclear deal with Iran as ministers were flying back to Vienna ahead of a looming deadline.

Addressing reporters, Kerry stressed that after almost two years of negotiations and on the ninth day of these latest talks “genuine progress” had been made.

But upping the pressure after three meetings just alone on Sunday with his Iranian counterpart Mohammad Javad Zarif, he warned the fate of the negotiations still swung in the balance and “could go either way.”

The foreign ministers of France, Germany, Russia and Britain were expected back in the Austrian capital later Sunday, with their Chinese counterpart possibly due on Monday.

“I want to be absolutely clear with everybody, we are not yet where we need to be on several of the most difficult issues,” Kerry said, standing at a podium in the searing sun, his crutches due to a broken leg by his side.

If all sides were prepared to make hard choices, then “we could get an agreement this week. But if they are not made, we will not,” Kerry warned, adding that if there was “absolute intransigence” the US would walk away.

The global powers — Britain, China, France, Germany, Russia and the United States — are trying to pin down a deal putting a nuclear bomb out of Iran’s reach in return for lifting a web of sanctions against the Islamic republic.

On one of the thorniest issues — choreographing the nuclear steps to be taken by Iran in exchange for reciprocal sanctions relief — a compromise may be emerging, at least among experts thrashing out the complex final accord.

“There are still differences,” an Iranian official insisted, however, while a Western diplomat said on UN sanctions — as opposed to EU and US ones — there was “no agreement yet”.

The deal between Iran and the P5+1 would end a standoff dating back to 2002 when dissidents first revealed undeclared nuclear facilities in Iran.

Officials have stressed all week that this is the endgame, and after missing several deadlines they are not planning to extend the quotes again.

“Extending the talks is not an option for anyone… We are trying to finish the job,” Iran’s lead negotiator Abbas Araghchi told Iranian TV late Saturday, saying there was a “positive atmosphere”.

But he too had warned: “If we reach an agreement that respects our red lines then there will be a deal. Otherwise we prefer to return home to Tehran empty-handed.”

A deal would also hold out the promise of bringing Iran back into the diplomatic fold at a time of mounting challenges and unrest in the Middle East.

Zarif said in an English YouTube message that an accord could “open new horizons to address important common challenges”.

“Our common threat today is the growing menace of violent extremism and outright barbarism,” he said in a clear reference to the rampaging Islamic State (IS) jihadist group that is a shared enemy for Tehran and Washington.

On Saturday it appeared that another stumbling block to the deal — a stalled UN probe into allegations of past efforts by Iran to develop the bomb — may potentially be close to being resolved too.

Speaking after a whirlwind trip to Tehran, International Atomic Energy Agency chief Yukiya Amano said the UN watchdog aimed to issue a report by year’s end on the “clarification of the issues” concerned.

But he stressed the IAEA would still need Iran’s cooperation to complete its probe.

Amano’s deputies were due to fly to Tehran on Sunday to discuss ways of resolving lingering questions, Iranian sources told Agence France-Presse, although the IAEA declined to comment on the reported visit.

“I think it would be very difficult to imagine Secretary Kerry at this point walking away, this close to the finish line,” Iran expert Suzanne Maloney from the Brookings Institution told Agence France-Presse.

“I just don’t think there’s any real likelihood that this collapses.” – Rappler.com