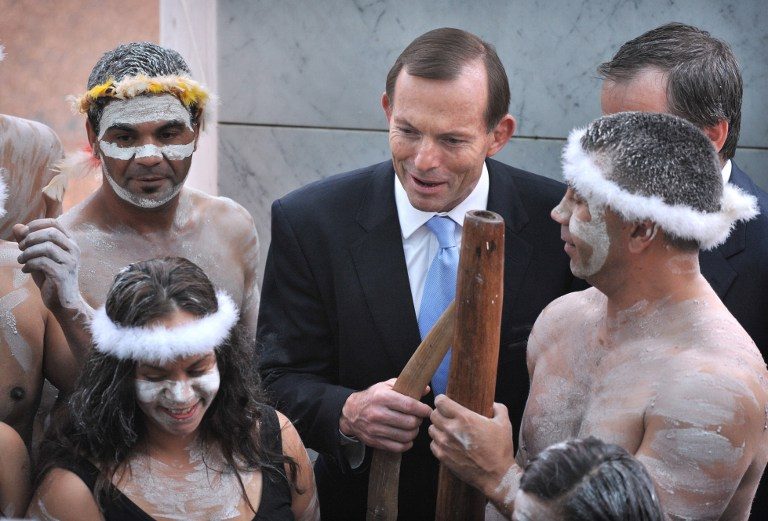 Prime Minister Tony Abbott has previously declared he would “sweat blood” to update the document which was written more than a century ago and fails to mention Aboriginal or Torres Strait Islander people.

“Our task – our mission if you like – is to correct the great silence in our constitution,” Abbott told the gathering of political and indigenous leaders at his harborside Kirribilli House residence late Sunday, July 5.

But he said what was presented to the people had to be “something that can be owned ultimately by the vast majority of the people of our country”.

Opposition Labor leader Bill Shorten, who was part of the rare bipartisan meeting with 40 indigenous leaders, also backed the call for change.

“Until we include Aboriginal and Torres Strait Islander people in our nation’s birth certificate it’s just not complete,” he told reporters on Monday.

Support for the “recognize” movement is high, with a Fairfax Ipsos national poll published in The Sydney Morning Herald Monday putting it at a record 85%. Eleven percent were opposed.

Australian lawmakers formally recognized indigenous people as the country’s first inhabitants in 2013, but there has been debate about  how the wording of the constitution should be changed.

“The Aboriginal community wouldn’t want just some symbolic change; we need to do something a bit more substantial,” Joe Morrison, chief executive of the Northern Land Council in the Northern Territory, told the Australian Broadcasting Corporation.

Some want a clear ban on racism included in the constitution, but indigenous leader Noel Pearson has argued instead for Aboriginal and Torres Strait Islander representatives to be given a say in laws which affect them.

“I think a lot of practical benefit will flow from the symbolic recognition – if we get the model right,” said Pearson, who is from Cape York in Australia’s far northeast.

Abbott has prioritized improving the lives of indigenous Australians, who have significantly lower life expectancies than others in the country, with many living in remote and poor communities.

He said he would spend a week running the country from an indigenous area, in the Torres Strait Islands and Northern Peninsula in the far north of the country, in August, following a similar scheme last year.

Aborigines are believed to have numbered around one million at the time of British settlement in 1788, but there are now just 470,000 out of a total population of 23 million. – Rappler.com