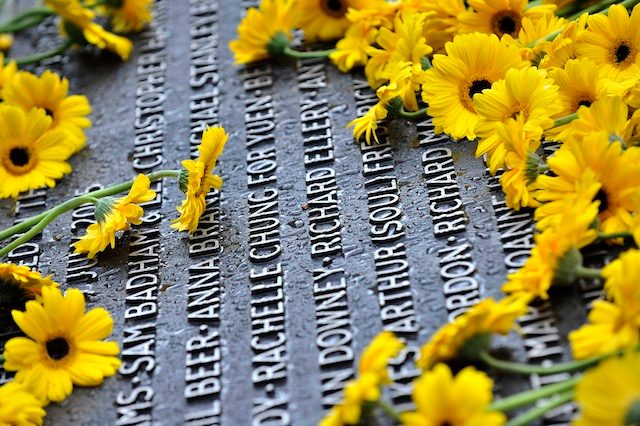 Facebook Twitter Copy URL
Copied
(UPDATED) David Cameron: 'Ten years on from the 7/7 London attacks, the threat from terrorism continues to be as real as it is deadly'

LONDON, United Kingdom (UPDATED) – Britain on Tuesday, July 7, commemorated the 10th anniversary of the London suicide bombings that claimed 52 lives, starting with a wreath-laying ceremony at the Hyde Park memorial in honor of the victims.

Prime Minister David Cameron laid a floral tribute in the park at 8:50 am local time (0750 GMT), the time the first of 4 bombs was detonated on the city’s transport system on July 7, 2005 by homegrown jihadists.

The anniversary comes less than a fortnight after an attack in Tunisia highlighted the ongoing Islamist threat.

Thirty Britons were among 38 people killed when a gunman went on the rampage at a popular Tunisian beach resort on June 26, Britain’s worst terror incident since the transport bombings in 2005.

“Ten years on from the 7/7 London attacks, the threat from terrorism continues to be as real as it is deadly,” Prime Minister David Cameron said.

“The murder of 30 innocent Britons whilst holidaying in Tunisia is a brutal reminder of that fact. But we will never be cowed by terrorism.”

In a social media tribute that quickly trended on Twitter, commuters posted pictures of themselves walking to work as part of the #WalkTogether campaign to honor the victims of 7/7.

An hour later, a fourth suicide bomber blew himself up on a double-decker bus in Tavistock Square near Russell Square, killing and injuring some of those who had been evacuated from the Underground.

In the past decade, successive governments have strengthened security powers and improved the way the emergency services respond to attacks.

But they are still struggling to address the problem of radicalization exposed by the bombings, which were carried out not by foreign fighters but by four young men who were inspired by Al-Qaeda.

Hundreds of British young people are now flocking to join the Islamic State (ISIS) group in Syria and Iraq, raising fears that they might return to attack their homeland.

‘Body parts all over the place’

Relatives and survivors will gather at the Hyde Park memorial later in the day to lay flowers and there will also be a service at St Paul’s Cathedral.

A nationwide minute’s silence will be held at 1030 GMT, the second such gesture in four days after Britain fell silent on Friday for those killed in Tunisia.

For many of those directly affected by the London bombings, the anniversary has brought back painful memories.

David Boyce was a 25-year-old supervisor at Russell Square station and one of the first to witness the carnage.

“There was body parts all over the place and dead bodies lying all over the train,” he told Agence France-Presse in an interview.

Many lives were saved by people such as Boyce, but the general emergency response was fractured, hampered by poor communications inside the tunnels and between controllers.

This has been overhauled, as has the government’s counter-terrorism strategy, with new measures introduced to clamp down on radical preachers and give police and security services tougher powers to question and track suspects.

Despite the new measures, intelligence chief Andrew Parker on Tuesday warned that the risk remained high.

“Appalling acts are attempted by individuals who have grown up here but decided for whatever twisted reasons to identify their own country as the enemy,” said the MI5 director general.

“The continuing fact that some people, born in the UK, with all the opportunities and freedoms that modern Britain offers, can nonetheless make those sorts of warped choices presents a serious societal and security challenge”.