Thai students to be released from jail but sedition charges upheld 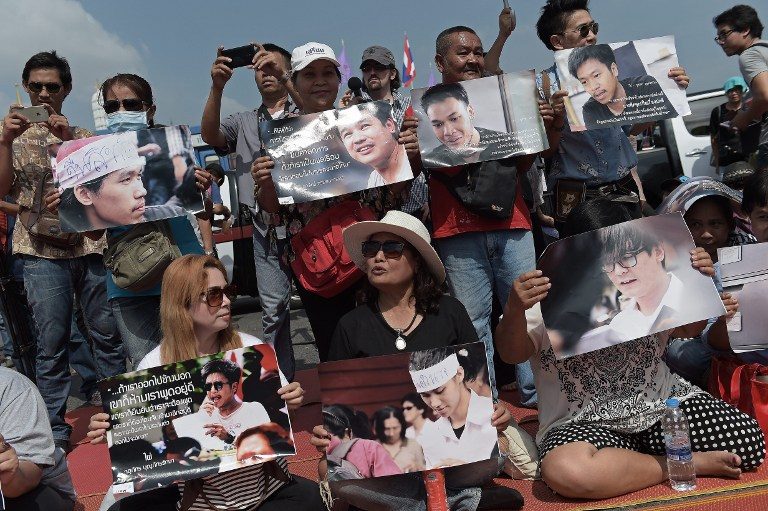 Facebook Twitter Copy URL
Copied
The activists – university students in their 20s, including one woman – have been in custody since late June

BANGKOK, Thailand – A group of Thai students detained over a peaceful anti-coup rally will be released from jail later Tuesday, July 7, but sedition charges against them will be upheld, their lawyer said, in a case that has sparked international condemnation.

The 14 students are part of a small network of pro-democracy campaigners who dared to publicly challenge Thailand’s military rulers after they seized power from an elected government last year and imposed sweeping curbs on civil liberties.

The activists – university students in their 20s, including one woman – have been in custody since late June.

They were detained after holding a peaceful protest at Bangkok’s Democracy Monument and charged with sedition, which caries up to 7 years in jail.

On Tuesday Krisadang Nutcharut, a lawyer representing some of the students, told Agence France-Presse the military court denied a police request to detain the activists for another 12 days.

“The students have shown no sign of wanting to escape (the country). Detention is preventing them from fighting their case… They will be released later today,” Krisadang said, adding that charges against the group had been upheld.

The case, slammed by rights groups as a serious escalation in repression by the junta, is being handled by Bangkok’s military court where there is no right of appeal once convicted and hearings are often held behind closed doors.

On Tuesday morning soldiers cordoned off access to the court to journalists and supporters of the activists, who held up photographs of the students and called and sang for their release in defiance of earlier warnings by Thailand’s army chief.

Last week the European Union and the United Nations Human Rights Office added their voice to that of rights groups, calling on Thailand to drop the charges and free the activists from custody.

Thailand’s generals claim the May 2014 coup was essential to restore order after months of often violent protests against the elected government of Yingluck Shinawatra.

But opponents say it was the latest maneuver by Bangkok-based royalist elites, backed by large swathes of the military, to scupper democracy and protect their interests.

The coup marked another chapter in the country’s bitterly divided politics that roughly pits the capital’s elites against rural voters in the northern provinces who are loyal to ousted premiers Thaksin Shinawatra and his sister Yingluck.

The Shinawatras’ parties have won every election since 2001 and are known for their pro-poor policies. – Rappler.com