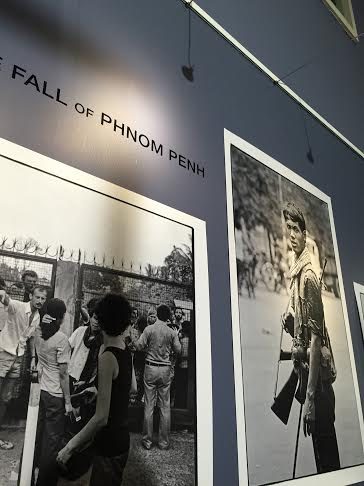 BANGKOK, Thailand – The madness of Cambodia’s Khmer Rouge has been the subject of many a documentary, but this year’s 40th anniversary of the genocidal group’s entry into Phnom Penh was reason enough to watch a screening of one film here – and be touched by its stark honesty, its deft control of emotion, and well, elegance.

“Hope” and “closure” are not always words that come to mind when discussing a film about the Khmer Rouge, whose bloody, fanatical rule from 1975 to 1979 resulted in the deaths of more than two million people from starvation, disease, torture and executions.

But these two do come together, despite the pain of memories, in Cambodia After Farewell, a well-acclaimed, 100-minute documentary by French Cambodian director Iv Charbonneau-Ching and Jeremy Knittel (Ana Films, Strasbourg) that was screened here recently to mark 4 decades since the Khmer Rouge took control of the Southeast Asian country to put in place the purest form of communism and the ideal agrarian society.

The documentary follows the journey back to Cambodia – and into the past – of the family of Iv Charbonneau-Ching, with his mother and aunt, as they reconstruct, piece by piece, what happened to the family members they lost to the Khmer Rouge.

Iv lost two uncles who, like many students and intellectuals, had believed in the lofty-sounding ideals of the group. These uncles had left the safety of France – where they and their siblings, including Iv’s mother and aunt, had been sent to as Cambodia was in turmoil – to return to a “new” country that soon turned against them as well.

“As a kid… I had questions I didn’t even dare to ask (my mother and relatives about what happened in Cambodia),” he said in reply to this writer’s question after the screening at the Alliance Francaise.

The Bangkok-based director spoke haltingly as his voice broke a bit, then half-chuckled at himself: “I tried to talk with them, gradually. I had some fragments (of what happened). And I wondered, do I have the right to ask these questions?”

Many of these questions he – and his family – confronted, finally, in 2012. They flew to Phnom Penh, a bustling city today that is a far cry from the bleak, deserted one it was just before the victorious Khmer Rouge took it on April 17, 1975. Over a 3-week journey, which Iv’s team filmed, he, his mother and aunt’s trip back in time yielded a mix of pain, happiness over finding a cousin and newly discovered relatives, and acceptance.

In terms of storytelling, the storyline of a family’s story of loss was a strong one; even a sure crowd drawer.

Filmwise, it was a risk. Films around war, tragedy, human rights violations, and death are rich with drama, at times becoming a quicksand for many first-person stories to sink in. An overdose of drama, when the storytellers are part of the story, can kill the way a story is told.

But Cambodia, After Farewell fares quite well as a documentary that is both very private and very public.

It is very “micro,” vicarious in making the audience look forward to – as well as fear – the results of Iv’s mother and aunt’s efforts to trace the circumstances, before and after the disappearances of their brothers, through places they had been in and through people who were with them or had met them, including Tuol Sleng survivor Bou Meng.

Iv’s uncles were also sent to the school-turned-prison called S-21. (Recalling the insanity they all lived with, Meng said while he was painting portraits of Khmer Rouge leader Pol Pot, he learned that his wife had been brought to the “Killing Fields,” or the mass execution grounds.)

Yet Cambodia, After Farewell is also a very “macro” story, one that binds too many Cambodians together in having had an abnormal proximity to loss.

Indeed, many families like Iv’s live with the scars of the Khmer Rouge years and continue to wage their own wars, 4 decades later.

Their own ways of finding closure continues against the backdrop of the Khmer Rouge trials, which continue on its 9th year.

Former foreign minister Ieng Sary and the military chief Ta Mok died in prison before their cases could be heard.

“To me, it was like the original crime,” Iv said of the Khmer Rouge victory, speaking in French-accented English. At the same time, he says, Cambodia’s violent decades were not only about the Khmer Rouge and its coming to power was the result of a chain of other events, including abuses by forces on the other side of the political fence.

“We have to commemorate it, but we shouldn’t forget the years before – the civil war, the (US-backed) Lon Nol regime that was absolutely extremely barbarian actually, the genocide against the Vietnamese minority, the brutalization of the Khmer people. They awakened the hatred between the urban people and the rural people.”

He continued, “When the Khmer Rouge arrived, the country was already totally destroyed – and we shouldn’t forget that. But undoubtedly, the Khmer Rouge committed crimes against humanity – unfortunately they were so very incompetent to rule the country.”

Today, the ECCC is going after senior Khmer Rouge leaders but “I hope we don’t forget the other ones, even the ones who preceded the Khmer Rouge, and those who came after,” he added.

Asked if the trial helps him and his family cope with the past, Iv said: “It’s impossible to judge [just] those few people, and they are not the only ones.”

Looking back at the process of making the documentary, Iv says that while he had several trips to Cambodia to prepare for it, he was unsure about what exactly would happen during the actual visit with his relatives.

“We knew something would happen from this work of memory, but we didn’t know what.”

“In some ways, it’s like a road movie. We meet people and these people give fragments of the memory,” he explained.

The more they went into other villages in search of accounts about their relatives, the more his aunt and mother rebuilt their family’s story.

“At the beginning, they arrived like strangers in Cambodia; they don’t remember any of the streets but little by little, they reappropriate their country and become more and more active in the memory work, and I fade away,” he pointed out.

“If you decide to do memory work, you have to ask why you make it. If it’s only to look at dead people and torture yourself, I’m not sure you should do it,” Iv added.

“But in case, this work led us to build new ties with our country, with a new family.”

“During the 20 days, I didn’t have time to think. But after, when we were editing the movie, I did get to understand why I did it, why I wanted to do it,” Iv mused.

After the documentary peels off layer after layer of his family’s story and lays bare all their fears, their painfully answered as well as still-unanswered questions, Iv finally speaks toward the film’s end to say that it was “my way to fight back at what the Khmer Rouge tried to do to my family.”

His family was broken, but it has also made been whole again. – Rappler.com

Johanna Son, a journalist based in Bangkok, Thailand for 16 years, follows regional affairs. She is also director of IPS Asia-Pacific media organization.