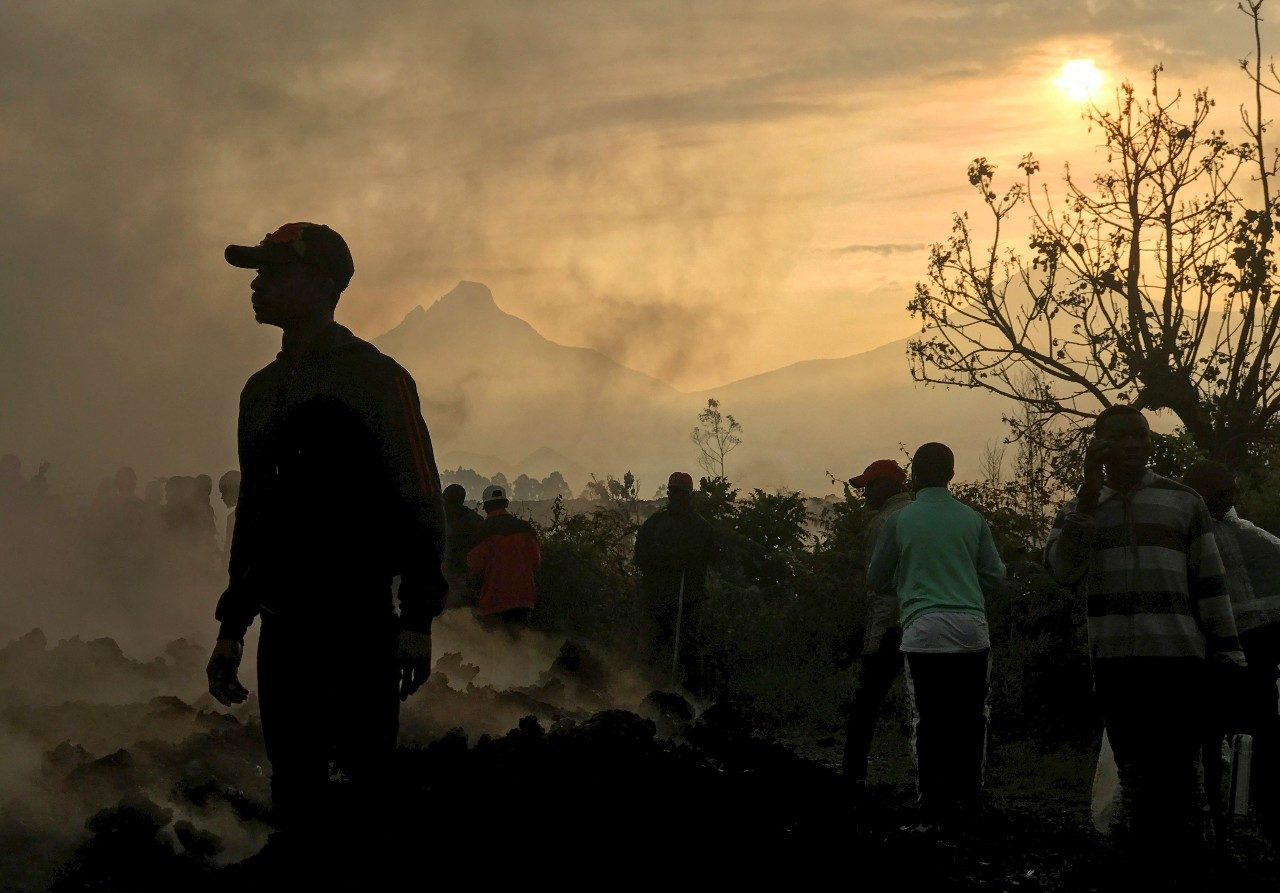 AFTERMATH. Residents walk near destroyed homes with the smouldering lava deposited by the eruption of Mount Nyiragongo volcano near Goma, in the Democratic Republic of Congo on May 23, 2021.

A smoking trail of lava from a volcanic eruption covered hundreds of houses in eastern Congo on Sunday, May 23, leaving residents to pick gingerly through the wreckage, though the flow halted just short of the major city of Goma.

Goma was thrown into panic on Saturday evening, May 22, as Mount Nyiragongo erupted, turning the night sky an eerie red and sending a wall of orange lava downhill towards the lakeside city of about 2 million people. Thousands fled on foot with their belongings, some towards the nearby border with Rwanda.

As the sun rose on Sunday a smoldering black gash could be seen on the outskirts of Goma, where the lava had cooled to rubble. At some points it was three storeys high, engulfing even large buildings and sending smoke into the gray morning sky.

Residents in the Buhene district sorted through the mangled white remains of tin roofs or lifted rocks – tiny individual efforts in what will likely be a months’-long campaign to restore the zone. Elsewhere, groups of people posed for photos on the steaming lava.

It was not immediately clear if anyone had died, or how widespread the material damage was.

“We hope that in time this will end. And by God’s grace it is over,” said one resident in Kibati, about 15 kms (9 miles) north of Goma.

Nyiragongo’s previous eruption in 2002 killed 250 people and left 120,000 homeless. It is one of the world’s most active volcanoes and is considered among the most dangerous. Saturday’s eruption appears to have been caused when fractures opened in the volcano’s side, causing lava flows in various directions.

The flow towards Goma appeared to have stopped a few hundred meters from the city limits, one Reuters reporter said. The nearby airport was untouched.

A separate lava flow that headed east over unpopulated terrain towards Rwanda also appeared to have stopped, the reporter said.

Lava crossed a main road out of Goma, cutting if off from cities to the north. Traffic was in gridlock in most places as people tried to leave or return to assess the damage to their homes.

“Local authorities who have been monitoring the eruption overnight report that the lava flow has lost intensity,” government spokesman Patrick Muyaya said on Twitter on Sunday.

Experts were worried that the volcanic activity observed in the past five years at Nyiragongo mirrors that in the years preceding eruptions in 1977 and 2002.

Volcanologists at the OVG, which monitors Nyiragongo, have struggled to make basic checks on a regular basis since the World Bank cut funding amid embezzlement allegations, though experts said that the timing of this eruption was impossible to predict.

“We’ve been extremely lucky that it was very brief,” said Dario Tedesco, a volcanologist based in Goma. “From the little information we have, it was just the lava within the crater that came out, there was no additional lava from below.” – Rappler.com