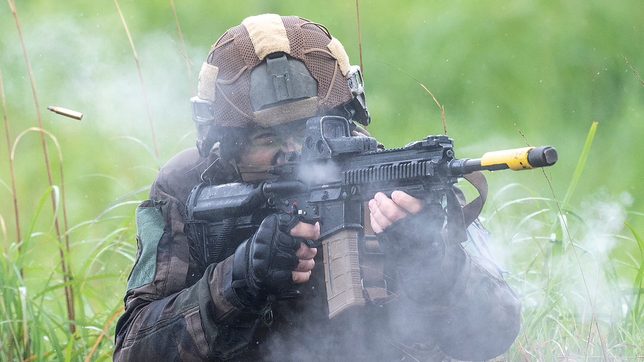 In this file photo, a French soldier trains during a joint military drill between Japan Self-Defense Forces, French Army and US Marines, at the Kirishima exercise area in Ebino, Miyazaki prefecture, Japan May 15, 2021.

The French army has killed an al Qaeda leader during an operation in the Sahel region who is believed to be responsible for the kidnapping and killing of two French journalists in 2013, Armed Forces Minister Florence Parly said on Friday, June 11.

Parly said in an address posted on Twitter that three Islamist militants were also killed during the operation in the West African region.

“On June 5, the Barkhane force detected a planned attack on an UN compound in Aguelhok in northern Mali”, the minister said.

She said that a military operation was launched as a group of armed terrorists was about to fire mortars.

President Emmanuel Macron said on Thursday France’s operation battling Islamist militants in Sahel would come to an end with troops now operating as part of broader international efforts in the region.

France, the former colonial power, has hailed some success against Sahel militants in recent months but the situation is extremely fragile and Paris has grown frustrated with no apparent end in sight to its operations and political turmoil, especially in Mali.

The decision came days after Malian army Colonel Assimi Goita took power following his overthrow of a second president in nine months and growing criticism about some governments negotiating with militants. – Rappler.com