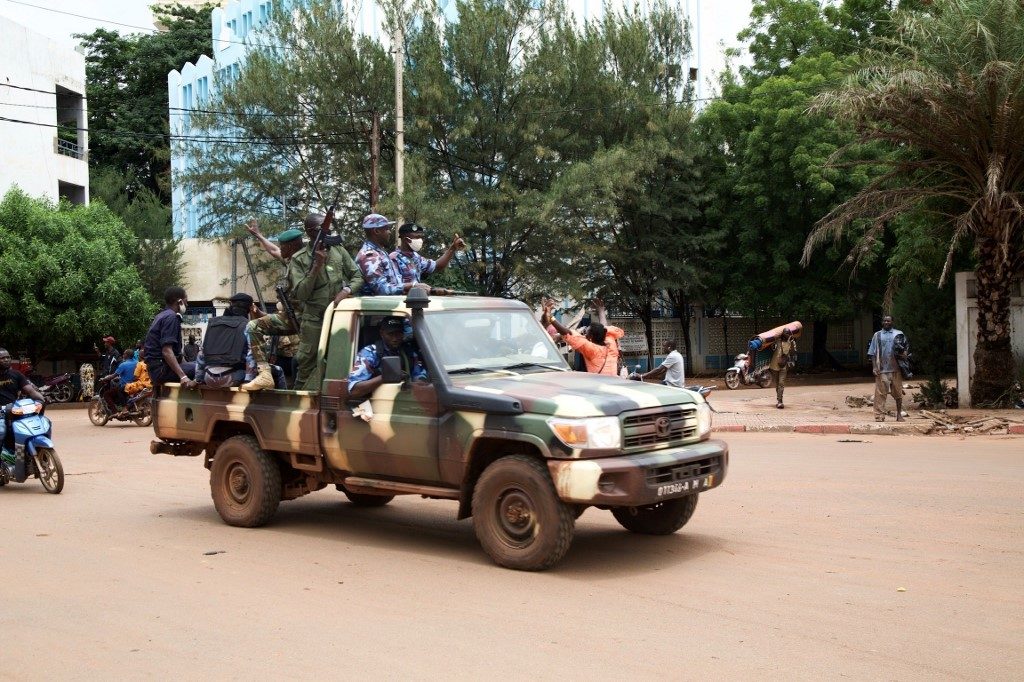 Malian soldiers drive through the streets of Bamako, Mali on August 19, 2020, the day after rebel troops seized Malian President Ibrahim Boubacar Keita and Prime Minister Boubou Cisse in a dramatic escalation of a months-long crisis. - Mali awoke on August 19, 2020, to a new chapter in its troubled history after rebel military leaders forced Malian President Boubacar Keita from office, prompting its West African neighbours to threaten border closures and sanctions against the coup leaders. Keita, embattled by months of protests over economic stagnation, corruption and a brutal Islamist insurgency, said he had resigned to avoid bloodshed. (Photo by ANNIE RISEMBERG / AFP)

Coup leaders in Mali faced a wave of international pressure on Wednesday, August 19, a day after they forced out a president weakened by months of mass protests.

The chorus of disapproval was led by the United States, African Union and European Union – all demanding that the military leaders release President Boubacar Keita, Prime Minister Boubou Cisse and other officials taken captive on Tuesday, August 18.

Keita, pressed by months of protests over economic stagnation, corruption and a brutal Islamist insurgency, said in a televised address that the military leaders had given him no choice but to resign.

Jubilant crowds had cheered the rebels on Tuesday as they arrived in the capital Bamako.

However, there were few obvious traces of the previous day’s drama on Bamako’s streets on Wednesday – troops had not been deployed en masse despite the coup leaders announcing a night-time curfew.

The UN Security Council was due to hold emergency talks on the situation on Wednesday as international diplomats swung into action to seek a way out of the crisis.

Both France and Germany backed the mediation of West African countries, but an effort by the Economic Community of West African States (ECOWAS) last month to broker a unity government fell flat after the opposition rejected it.

The current chairman of the African Union (AU), South African President Cyril Ramaphosa, called for the “immediate return to civilian rule and for the military to return to their barracks” and the EU’s Charles Michel said all prisoners should be freed immediately.

“The freedom and safety of detained government officials and their families must be ensured,” said US Secretary of State Mike Pompeo.

The coup leaders appeared on television overnight to pledge a political transition and new elections within a “reasonable time.”

Malian Air Force deputy chief of staff Ismael Wague said he and his fellow officers had “decided to take responsibility in front of the people and of history.”

There were no reports of casualties during the military takeover but the coup leaders announced a curfew and border closures, in effect sealing off the country.

They took Keita into custody and were holding him at the Kati military base, an ironic twist as the facility was also the site of the 2012 coup that brought him to power.

A source in a committee established by the military after the coup told Agence France-Presse that Keita was still being held on Wednesday.

French President Emmanuel Macron was among the first to condemn the mutiny – Mali is the cornerstone of French-led efforts to roll back jihadists in the Sahel.

Colonel Wague said “all past agreements” would be respected, including Mali’s support for anti-jihadist missions such as the UN force in Mali (MINUSMA), France’s Barkhane force, the G5 Sahel, and European special-forces initiative Takuba.

The coup leaders also remain “committed to the Algiers process,” a 2015 peace agreement between the Malian government and armed groups in the north of the country, he said.

Swathes of Mali’s territory are outside of the control of central authorities and years of fighting have failed to halt an Islamist insurgency that has claimed thousands of lives since emerging in 2012.

The failure fueled frustrations with Keita’s rule and tensions flared in April after the government held long-delayed parliamentary elections, the results of which are still disputed.

ECOWAS condemned the coup in a statement, pledging to close land and air borders to Mali and push for sanctions against “all the putschists and their partners and collaborators.”

The 15-nation bloc – which includes Mali – also said that it would suspend the country from its internal decision-making bodies.

Further afield, Morocco on Wednesday stressed the need for “stability” in Mali, calling for “responsible dialogue, respect for constitutional order and the preservation of democratic gains.”

The coup coincided with opposition plans to resume protests against Keita.

The June 5 Movement, named after the date of its first protest, focused public anger against the leader and made increasingly strident demands for his resignation.

Its campaign veered into crisis last month when 11 people were killed during 3 days of unrest sparked by a demonstration. Neither the movement nor its informal leader, imam Mahmoud Dicko, have yet reacted to the coup. – Rappler.com