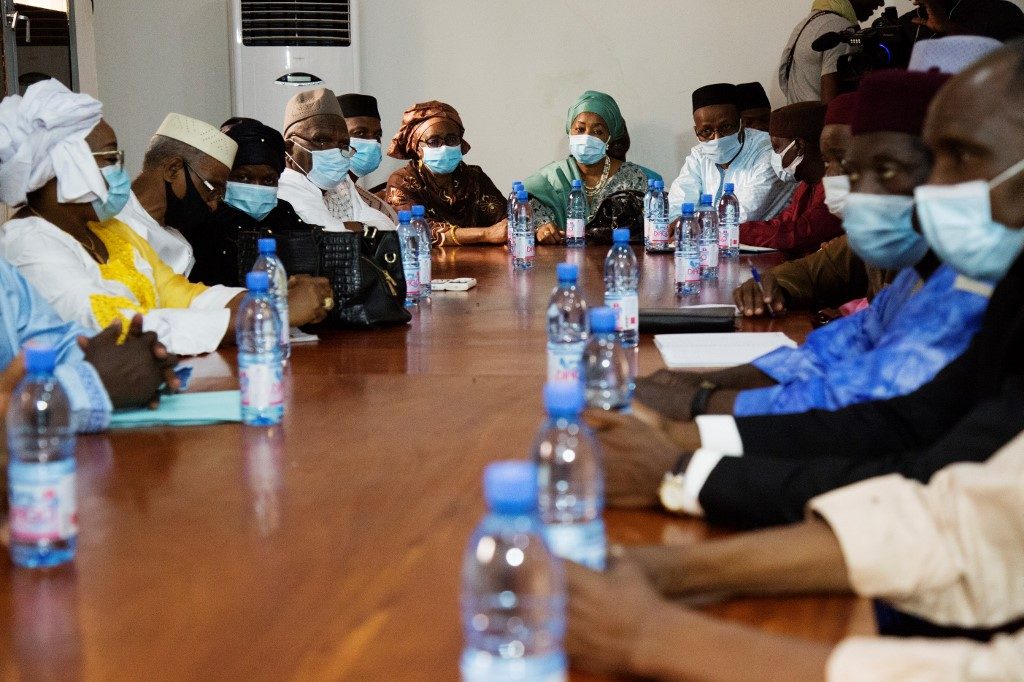 A delegation from M5-RFP, who have organized large protests in Mali since June, wait in a meeting room at the CNSP (National Committee for the Salvation of the People) headquarters on the military base in Kati, Mali, just outside of Bamako, on August 26, 2020. - A Malian protest coalition that had campaigned against former president Ibrahim Boubacar Keita said on August 26, 2020, it was willing to work with the junta which ousted him in a process to restore civilian rule. (Photo by ANNIE RISEMBERG / AFP)

Facebook Twitter Copy URL
Copied
The military rulers have this time invited to the talks the June 5 Movement, which spearheaded a protest movement that led to the toppling of president Ibrahim Boubacar Keita

The August 18 putsch has prompted Mali’s neighbors along with ally and former colonial ruler France to call for a swift transfer of power, amid worries over instability in a country struggling with an Islamist insurgency, ethnic violence, endemic corruption and economic malaise.

The military rulers have this time invited to the talks the June 5 Movement, which spearheaded a protest movement that led to the toppling of president Ibrahim Boubacar Keita.

The movement was not invited for transition talks last Saturday, August 29, when the junta called off discussions at the last minute.

The other players invited to the talks on Saturday, September 5 and Sunday, September 6, include former rebels, unions and representatives from the media.

The June 5 group has demanded that the military rulers give it a role in the transition to civilian rule, which the military has promised without setting a timetable.

Mali’s influential imam Mahmoud Dicko, a key player in the mass opposition protests that led to Keita’s ouster, said the junta did not have “carte blanche.”

“We will not give a blank cheque to anyone to run this country, that’s over,” he said.

“We led the fight,” he said. “People have died and the soldiers who have completed (this fight) must keep their word.”

The 15-nation Economic Community of West African States regional bloc has been piling pressure on the junta to hand over power quickly, fearing that the crisis could impact neighboring states.

This was rejected by the bloc, which has demanded an immediate civilian transition and elections within 12 months.

ECOWAS slapped sanctions on Mali after the coup, including a closure of borders and ban on trade and financial flows.

The powers of the president, the prime minister and parliament need to “be clearly defined,” said Abdourhamane Ben Mamata Toure, a lawyer and a former director at France’s prestigious Ecole nationale d’administration (ENA) which trains future bureaucrats.

One of the criticisms leveled against the toppled president is that he hogged power.

Keita, 75, was elected in 2013 as a unifying figure in a fractured country and was returned in 2018 for a second five-year term.

But his popularity crashed as he failed to counter the raging 8-year-old jihadist insurgency and brake Mali’s downward economic spiral.

Thousands of lives have been lost, hundreds of thousands of people have fled their homes and swathes of the country have been abandoned to armed Islamists by the state. – Rappler.com