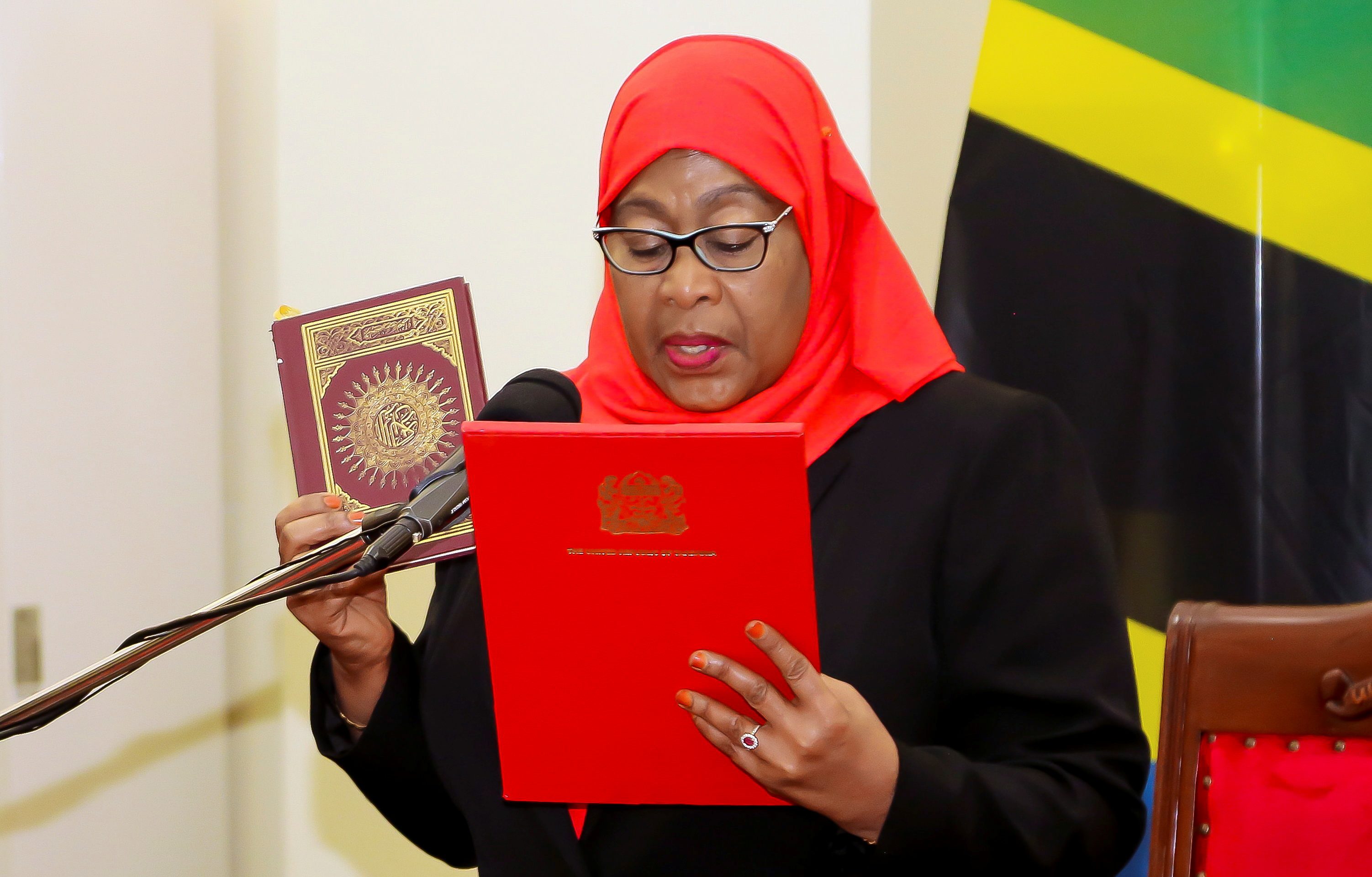 Facebook Twitter Copy URL
Copied
'This is a time to bury our differences, and be one as a nation,' says Tanzania's new President Samia Suluhu Hassan

Tanzania’s new President Samia Suluhu Hassan said on Friday, March 19, the country should unite and avoid pointing fingers after the death of John Magufuli, her COVID-19 skeptic predecessor, urging the east African country to look forward with hope and confidence.

Wearing a red hijab, she took her oath of office on the Koran in a ceremony at State House in the country’s commercial capital Dar es Salaam. She is the first female head of state in the country of 58 million.

Hassan, vice president since 2015, gave a brief and somber address after she was sworn in, addressing a heavily male crowd that included two former presidents and uniformed officers.

“This is a time to bury our differences, and be one as a nation,” she said. “This is not a time for finger pointing, but it is a time to hold hands and move forward together.”

The remarks appeared aimed at dispelling a mood of uncertainty that developed after Magufuli, criticized by opponents as a divisive and authoritarian figure, disappeared from public view for 18 days before his death was announced.

His absence from public life drew speculation he was critically ill with COVID-19. Magufuli died of heart disease, Hassan said when announcing his death on Wednesday, March 17.

Among the first tasks facing Hassan, 61, will be a decision on whether to procure COVID-19 vaccines. Under her predecessor, the government said it would not obtain any vaccines until the country’s own experts had reviewed them.

She will also be faced with the task of healing a country polarized during the Magufuli years, analysts said, and building her own political base to govern effectively.

Described as a soft-spoken consensus-builder, Hassan will also be the country’s first president born in Zanzibar, the archipelago that forms part of the union of the Republic of Tanzania.

Her leadership style is seen as a potential contrast from Magufuli, a brash populist who earned the nickname ‘Bulldozer’ for muscling through policies and who drew criticism for his intolerance of dissent, which his government denied.

She praised the late leader in her remarks: “He taught me a lot, he was my mentor and prepared me sufficiently.”

Rights groups say Magufuli’s six-year-rule was marred by arbitrary arrests, suspension of critical television and radio stations and the blocking of social media and other abuses.

DaMina Advisors, a political risk advisory firm, predicted the new president was likely to make a public U-turn on her predecessor’s policy of COVID-19 denial and his generally negative attitudes toward foreign investors. – Rappler.com