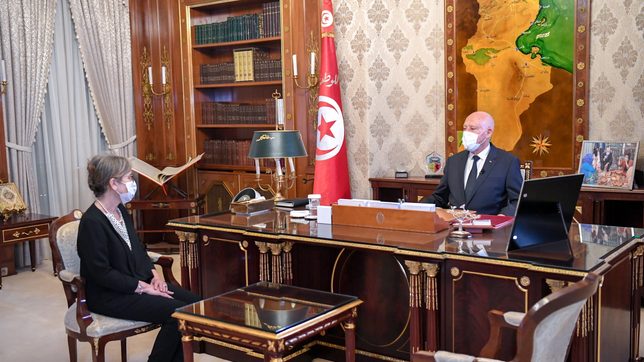 Facebook Twitter Copy URL
Copied
Najla Bouden Romdhane was responsible for implementing World Bank projects at the education ministry, but she has little experience of government

Romdhane, Tunisia’s first woman prime minister, will take office at a moment of crisis, with the democratic gains won in a 2011 revolution in doubt and as a major threat looms to public finances.

A geological engineer, Romdhane was responsible for implementing World Bank projects at the education ministry, but she has little experience of government.

Speaking in a video published online, Saied said her appointment honored Tunisian women and asked her to propose a cabinet in the coming hours or days “because we have lost a lot of time.”

The new government should respond to the demands and dignity of Tunisians in all fields, including health, transport and education, he added.

Saied dismissed the previous prime minister, suspended parliament and assumed wide executive powers in July and has been under growing domestic and international pressure to form a new government.

Last week he brushed aside much of the constitution, saying he could rule by decree and control the government himself, during an emergency period that has no defined endpoint.

Tunisia faces a rapidly looming crisis in public finances after years of economic stagnation were aggravated by the coronavirus pandemic and political infighting. Government bonds are under pressure and the cost of insuring against their default has hit a record high.

The anew government will have to move very quickly to seek financial support for the budget and debt repayments after Saied’s power grab in July put talks with the International Monetary Fund (IMF) on hold.

However, after Saied’s announcement last week that the government will be responsible to the president and that he can select or sack cabinet ministers, the role of prime minister will be less important than in previous administrations.

Most of Tunisia’s previous political elite, including most parties in the suspended parliament, have said they oppose Saied’s power grab. – Rappler.com