Sep 14, 2015 9:00 PM PHT
Facebook Twitter Copy URL
Copied
Rappler #PHvote's 'The Leader I Want' series looks at Grace Poe's stand on key issues that the next president will have to address 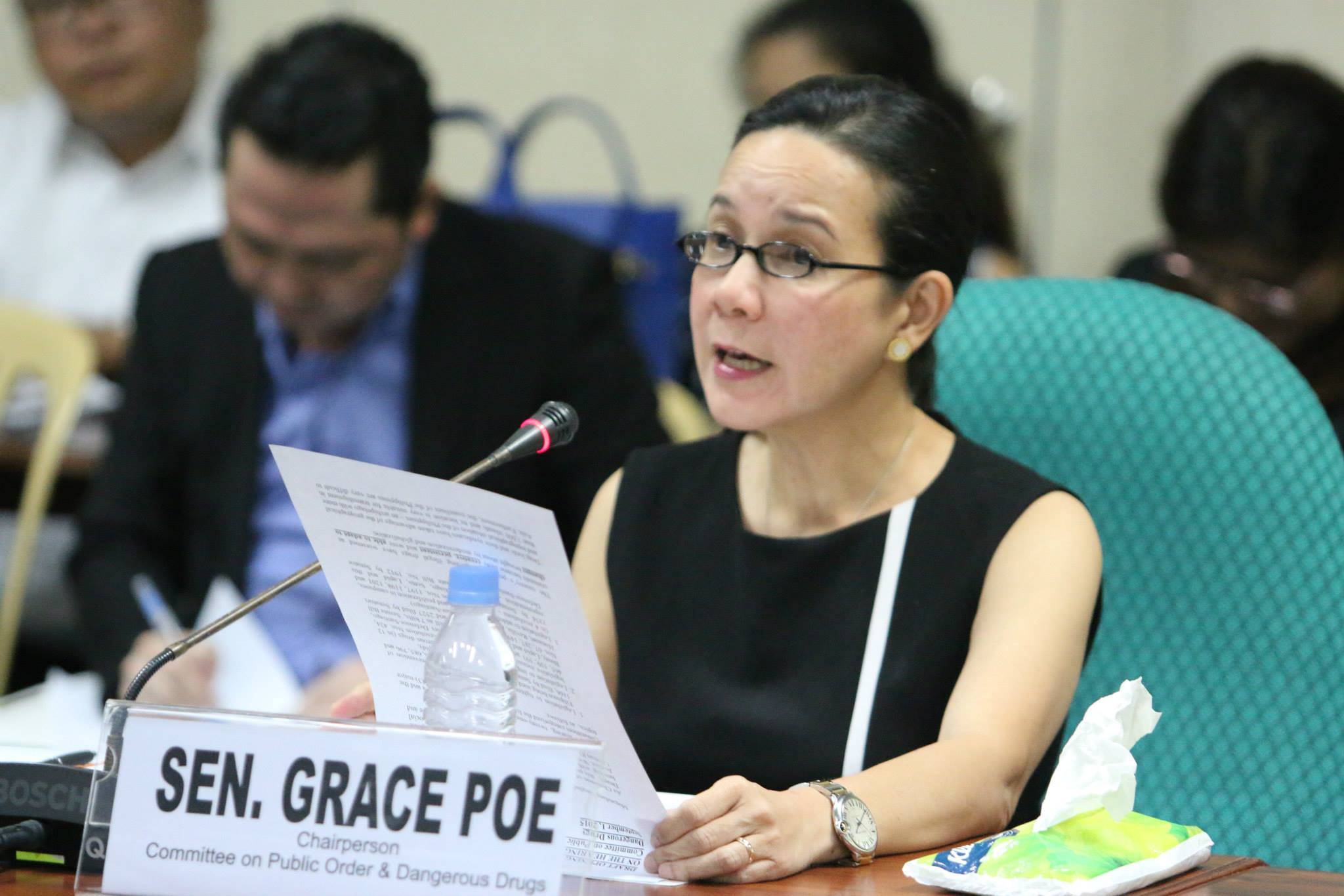 MANILA, Philippines – Senator Grace Poe admits that her name is her biggest capital, owing it to her father Fernando Poe Jr, the late action star who remains well-loved by the masses.

While her father lost in what was widely believed to be a rigged election in 2004, Poe in a way reclaimed the victory when she topped the senatorial race in 2013.

Two years into her first elective post, she is leading in presidential preference polls, prompting supporters to push her to run for president in 2016. She is set to declare her bid on Wednesday, September 16.

Although some say she has limited experience in government service, Poe’s deemed clean image is her currency in a sea of old school politicians. Some say, however, that her association with Senator Francis Escudero weighs down her chances.

Prior to Poe’s stint in the Senate, she was appointed by President Benigno Aquino III as the chairperson of the Movie and Television Review and Classification Board (MTRCB) in 2010. She was afterwards invited to run as a guest candidate of the administration slate in 2013.

Talks with the President for her to seek the vice presidency instead under the Liberal Party bogged down after Aquino referred to her as “unripe.” Poe said Daang Matuwid (Straight Path), the battlecry of the administration, is “not exclusive” to a select few. She is a “principled ally” of Aquino, she said, but her loyalty is to the public.

As part of Rappler’s #PHvote “The Leader I Want Series,” we look at Poe’s stand on issues the next president will have to zoom in on: corruption, social inequality, climate change and disasters, foreign policy, overseas Filipino workers, and peace in Mindanao.

Should Poe be able to hurdle the issues of supposed inexperience, citizenship, and residency hurled at her, she has to face these bigger problems of the nation.

What gains from the Aquino administration should she continue and which strategies should be changed? Tell us in the comments section below or tweet using #TheLeaderIWant why or why not Poe should be the next leader of the country.

Poe’s name has so far not been dragged into any corruption controversy.

Her clean image was brought about by her participation in the Senate’s investigations into corruption cases of government officials including Vice President Jejomar Binay.

Poe signed the committee report recommending filing of charges against Binay, her father’s ally. She even said she would not pardon Binay if and when she becomes president, as it would be detrimental to any administration.

Poe pushed for the freedom of information bill in the Senate at the height of the pork barrel controversy. The measure, if passed into law, would allow the public to access government records.

She authored Senate Bill 2485 and Senate Bill 2425, aiming to strengthen the capacity of the Office of the Ombudsman, responsible for investigating and prosecuting government officials accused of crimes.

Poe also introduced Senate Bill 2578, which seeks to penalize the illicit enrichment of public officials for acquisition of properties through unlawful means.

Poe, in her rounds in different cities and provinces, has said she is all for inclusive growth. While there is economic growth, she said the benefits hardly “trickled down to the people who need it most – the poor and underprivileged Filipinos.”

Poe’s past events and speeches give telling clues on one of her campaign focuses – the youth.

While Poe is in favor of the administration’s flagship anti-poverty measure, the Conditional Cash Transfer program, she said this is not enough to improve the lives of future generations. She pushes for post-CCT livelihood programs for the people to prepare them for independence once they graduate the program.

Poe also pushes for a free lunch program for all public elementary school children, saying half a million kids are “severely malnourished.”

“Conditional Cash Transfer program, which is good, pero hindi diretso sa tiyan iyon, dumadaan ‘yan sa kamay at ang kamay ay kontrolado ng isip na baka gamitin sa ibang bagay,” Poe said. (It does not go straight to people’s stomachs. It goes through the hands of people and these hands are controlled by the mind that might decide to use it for other things.)

The neophyte senator also favors the K to 12 program of the Aquino administration, saying this will equip students with the necessary skills to work and provide for their families.

Poe also pushes for more infrastructures to ease traffic and the burden on commuters, repeatedly criticizing how the national government has mismanaged the Metro Rail Transit 3 or the MRT.

She says agriculture is one of the poorest sectors in the country, so she is pushing for stronger tourism and agriculture programs by building more dams and irrigation facilities.

Poe was the primary sponsor of Republic Act 10639 or the “Free Mobile Texts During Disasters Act.” This measure establishes an early warning system via text messaging to alert Filipinos of impending danger in times of natural calamities.

She earlier said climate change exacerbates poverty in the country. As such, she urged the private sector to cooperate with the government in helping communities become resilient and adapt to the changing times.

Poe, however, has yet to release a more specific plan on action on the issue.

On China and the US

Poe supports the decision of Aquino to file an arbitration case against China. Like Aquino, she believes the maritime dispute needs to be isolated from the overall ties with China.

Poe also said the Philippines should not rely on the United States for defense over the territorial dispute, saying the US would first consider their constituents before anyone else.

Poe, a former US citizen, said the US cannot be expected to always come to the Philippines’ aid in its conflict with China, even though the two countries are allies.

“I’m sorry to say, Mr Ambassador, but I know the US, our ally…. We can’t fault them for thinking of their own interests. In pursuing any conflict, the first interest we need to think of are our constituents,” Poe said at the Rotary Club of Manila’s Journalism Awards ceremony on Thursday, June 11. (READ: Poe on West PH Sea row: PH shouldn’t rely on US)

Poe earlier said she wants government agencies to brief Congress on the country’s preparations for ASEAN 2015 so it can pass laws that will protect the local industry.

She said the Philippines must prepare for the threat of regional competition and the entry of lower-priced imported goods.

Poe said that although the Philippine economy has been described as Asia’s Emerging Tiger, “the country continues to lag behind ASEAN neighbors in terms of economic development.”

To protect the interest of local industries, Poe said a regulatory law should be passed before the full implementation of the ASEAN Charter.

Poe filed Senate Bill 1421, which allows a prospective OFW who has a valid contract certified by the Philippine Overseas Employment Administration (POEA) to avail himself of a P50,000 loan from the Overseas Worker Welfare Administration (OWWA) to “defray the living expenses of his family during the first few months of his absence.”

Poe also filed SB 2162, seeking to amend RA 10022 or the Migrant Workers and Overseas Filipino Act of 1995. SB 2162 seeks to allow illegally terminated OFWs to get their remaining salaries for the unserved periods of their contracts violated by their employers.

All these measures are still pending at the committee level.

Poe criticized the Bureau of Customs’ new policy on stricter examination of balikbayan boxes, saying this may “only breed more opportunities for corruption in the BOC.” She said this is an additional burden to our “modern day heroes.”

Poe led the Senate investigation into the Mamasapano incident at a time that Congress is discussing the proposed Bangsamoro Basic Law (BBL).

The committee report found Aquino responsible for the botched operation that killed 67, including 44 elite cops.

“At this crucial time, it is imperative that the President display unquestionable leadership, be forthright and candid with our people, accept responsibility for all decisions he makes as President, and admit the mistakes he made along the way,” Poe said.

This did not sit well with the President.

Poe, in June, said she is against the Bangsamoro law proposed by Malacañang, as it would create a separate republic within the country.

She also opposed the opt-in provision that would allow any local government in Mindanao and Palawan to join the Bangsamoro. With this, Poe said the BBL should also include an “opt-out” provision.

Amid outrage over the recent death and displacement of Lumad, an indigenous group in Mindanao, Poe filed a resolution calling for a Senate inquiry into the reported harassment of members of the tribal group.

Aside from peace and security in the region, Poe, in her radio interviews in Zamboanga City last August, said Mindanao needs to have more livelihood and infrastructure support. She said she would fast track creation of power plants in the region to address power shortages. – Rappler.com