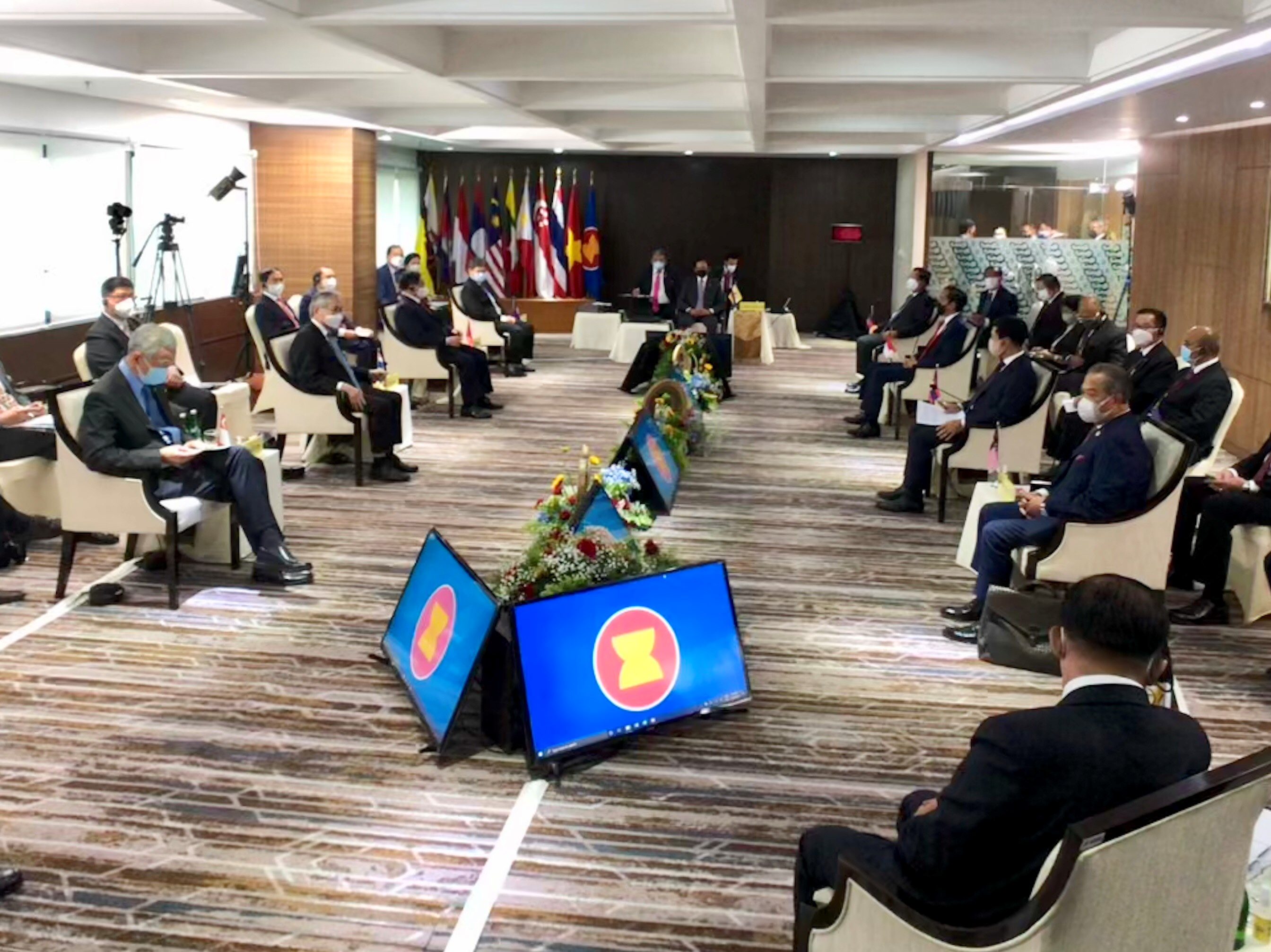 Southeast Asian leaders said they had agreed on a plan with Myanmar’s junta chief on Saturday, April 24, to end the crisis in the violence-hit nation, but he did not explicitly respond to demands to halt the killing of civilian protesters.

ASEAN leaders wanted a commitment from Min Aung Hlaing to restrain his security forces, who an activist monitoring group says have killed 745 people since a mass civil disobedience movement erupted to challenge his February 1 coup. They had also wanted the release of political prisoners.

“He did not reject what was put forward by me and many other colleagues,” Muhyiddin said. (READ: Malaysia calls on Myanmar to end killings, release political detainees)

According to a statement from group chair Brunei, a consensus was reached on five points – ending violence, a constructive dialogue among all parties, a special ASEAN envoy to facilitate the dialogue, acceptance of aid and a visit by the envoy to Myanmar. There was no mention of releasing political prisoners in the statement.

“He said he (Min Aung Hlaing) heard us, he would take the points in, which he considered helpful,” said Singapore Prime Minister Lee Hsien Loong, according to Channel News Asia television.

“He was not opposed to ASEAN playing a constructive role, or an ASEAN delegation visit, or humanitarian assistance.”

But Lee added the process had a long way to go, “because there’s one thing to say you’ll cease violence and release political prisoners; it’s another thing to get it done”.

There was no immediate comment from Min Aung Hlaing.

“The release of political prisoners is a necessary requirement for the cessation of violence,” said Charles Santiago, head of the ASEAN Parliamentarians for Human Rights group.

“ASEAN must now act swiftly and set a clear timeline for Min Aung Hlaing to deliver on ending the violence, or stand ready to hold him accountable.”

The ASEAN gathering was the first coordinated international effort to ease the crisis in Myanmar, an impoverished country that neighbours China, India and Thailand, since the coup that overthrew Aung San Suu Kyi’s elected government. Myanmar is part of the 10-nation ASEAN, which has a policy of consensus decision-making and non-interference in the affairs of its members.

Myanmar’s parallel National Unity Government (NUG), comprised of pro-democracy figures, remnants of Suu Kyi’s ousted administration and representatives of armed ethnic groups, said it welcomed the consensus reached but the junta had to be held to its promises.

“We look forward to firm action by ASEAN to follow up its decisions and to restore our democracy,” said Dr. Sasa, spokesman for the NUG.

It was unusual for the leader of a military government in Myanmar to attend an ASEAN summit – usually the country has been represented by a lower-ranked officer or a civilian.

The leaders of Indonesia, Vietnam, Singapore, Malaysia, Cambodia and Brunei were at the meeting, along with the foreign ministers of Laos, Thailand and the Philippines.

While ASEAN’s non-interference policy makes it difficult to tackle contentious issues, the body is seen by the United Nations, China and the United States as best placed to deal with the junta directly.

“We in the [@UN] Security Council eagerly await the outcome of the @ASEAN meeting on Burma, which deserves serious and immediate attention,” U.S Ambassador to the United Nations Linda Thomas-Greenfield tweeted.

Still, some analysts warned of the dangers of giving legitimacy to the junta by inviting its leader to the summit.

“Formal representation of the Tatmadaw (Myanmar military) at the ASEAN summit, without giving any concessions in return, including first and foremost a commitment to stop the bloodshed, is not constructive,” Huong Le Thu, of the Australian Strategic Policy Initiative, wrote in an analysis of the ASEAN meeting. – Rappler.com