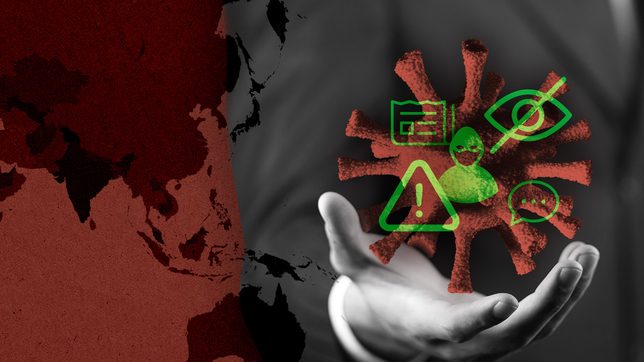 RESTRICTIONS. Many governments in the Asia Pacific region took advantage of the pandemic to control the flow of information and spread propaganda, according to Reporters Without Borders.

RSF, which released the report on Tuesday, April 20, said this began in Hong Kong ­– which ranked 80th in the Press Freedom Index – following Beijing’s imposition of a national security law that strengthens the mainland’s control over Hong Kong. Many critics, including Apple Daily owner Jimmy Lai, have been arrested and jailed since.

RSF said China (177th) is “the world’s undisputed specialist” when it comes to censorship and has “taken advantage” of the pandemic to further enhance its control over online information.

“The regime is also expanding its influence abroad with the aim of imposing its narrative on international audiences and promoting its perverse equation of journalism with state propaganda,” RSF said.

North Korea (179th) remains the Index’s worst performer, with RSF citing its continued “totalitarian control over information and its population.”

Vietnam (175th) intensified its control of social media content, RSF said, “while conducting a wave of arrests of leading independent journalists” ahead of the Communist Party’s congress in January 2021.

At least 10 countries used the pandemic “to reinforce obstacles to the free flow of information, RSF said.

Thailand (137th), Philippines (138th), Indonesia (113th), and Cambodia (144th) implemented laws that criminalize any criticism of the government and the publication of supposed false information.

Malaysia dropped 18 places to 119th – the biggest fall of any country in the index – owing to its adoption of an anti-fake news decree that enables authorities to impose their own version of the truth. This is similar to that of Singapore (160th), which earlier passed a law allowing the government to “correct” any information it deems to be false and to prosecute those responsible.

“The press freedom situation has worsened dramatically since the military coup in February 2021. By resuming the grim practices of the junta that ruled until February 2011 – including media closures, mass arrests of journalists, and prior censorship – Myanmar has suddenly gone back 10 years,” RSF said.

In Pakistan (145th), the military also controls journalists. The powerful Inter-Services Intelligence (ISI) continues to harass, intimidate, abduct, and torture critics living in the country and abroad, where many journalists live in self-imposed exile.

“Although the vast majority of media outlets reluctantly comply with the red lines imposed by the military, the Pakistani censorship apparatus is still struggling to control social media, the only space where a few critical voices can be heard,” RSF said.

In India (142nd), as pro-government media spread propaganda, journalists who criticize the government are tagged as “anti-state,” “anti-national,” and even “pro-terrorist” – exposing them to violent attacks online and on the field. This is also similar to the Philippine government’s red-tagging of journalists and critics, wherein they are labeled as state enemies, communists, or terrorists.

Meanwhile in Australia (25th), RSF said it was Facebook that “introduced the censorship virus” after the tech company decided to ban Australian media from publishing content on their Facebook pages due to a disagreement over a law that requires tech companies to pay news companies.

RSF reported that New Zealand (8th), Australia, South Korea (42nd), and Taiwan (43rd) – the regional press freedom models – have generally allowed journalists to do their jobs freely. (READ: What the world can learn from the ‘Taiwan model’ vs disinformation)

“Their good behavior has shown that censorship is not inevitable in times of crisis and that journalism can be the best antidote to disinformation,” RSF said.

The region’s young democracies – Bhutan (65th), Mongolia (68th), and Timor-Leste (71st) have resisted temptations of information control during the pandemic. RSF attributed this to the assertion of independence of the media and the branches of their governments.

The RSF Index ranks countries and regions according to the level of freedom given to journalists in a particular locale. – Rappler.com