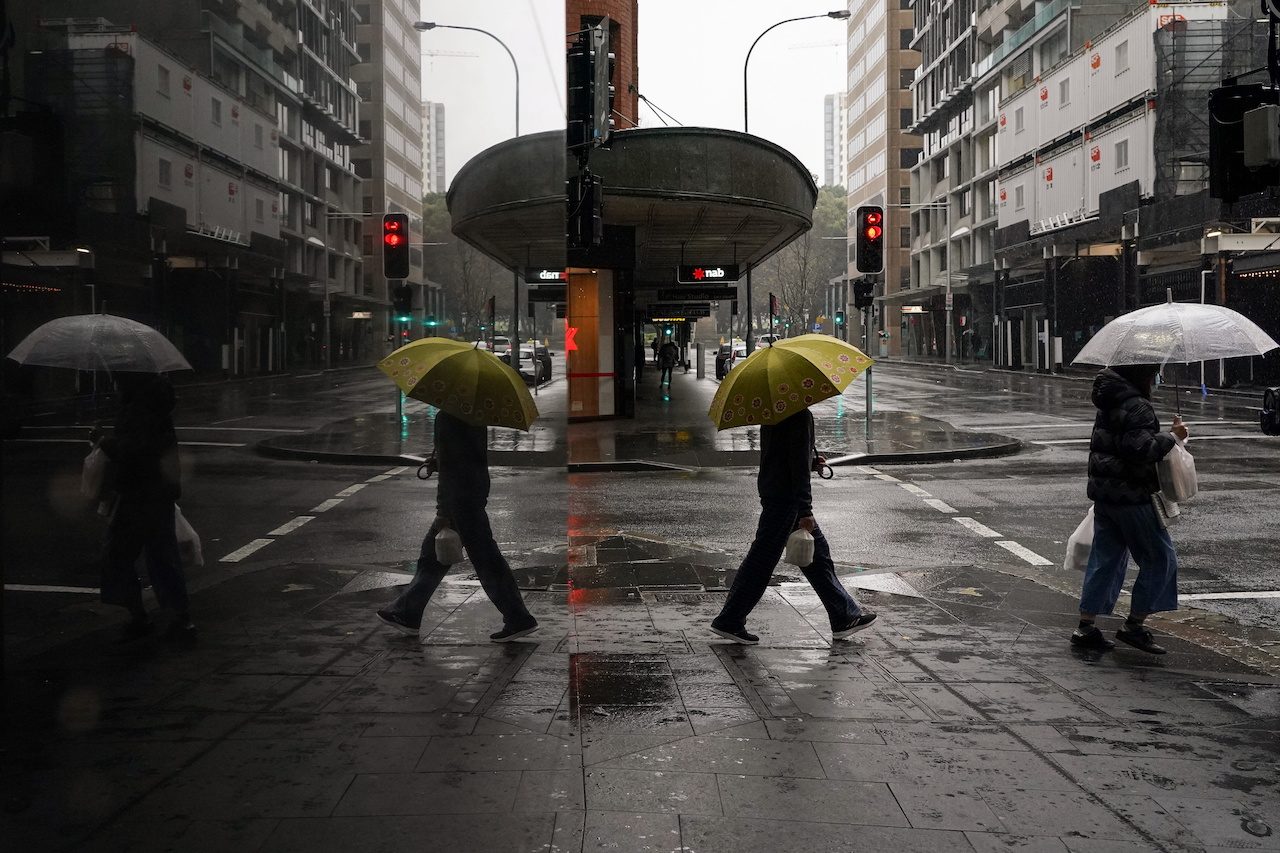 LOCKDOWN. People with umbrellas walk through the quiet city center during a lockdown to curb the spread of a COVID-19 outbreak in Sydney, Australia, August 24, 2021.

Australia logged a record 1,323 local COVID-19 cases on Sunday, August 29, as debate rages on whether the country should start living with the virus in the community, after initially being successful with suppressing coronavirus.

Australia’s most populous state New South Wales (NSW), the epicenter of the nation’s Delta-fueled outbreak, reported 1,218 cases as authorities there are set to slightly ease restrictions after nine weeks in lockdown. The lockdown is scheduled to last until the end of September.

NSW state Premier Gladys Berejiklian vowed to reopen the state once 70% of those 16 and older get vaccinated.

“No matter what the case numbers are doing…double-dose 70% in NSW means freedom for those who are vaccinated,” Berejiklian said.

On Sunday, she said the state has reached the halfway point of achieving the target.

In Victoria, the country’s second most populous state which is in its sixth lockdown since the start of the pandemic, there were 92 new infections on Sunday, the highest in nearly a year.

Victoria state Premier Daniel Andrews said his state’s lockdown, due to end on Thursday, will be extended, but would not say for how long.

“We see far too many cases today for us to seriously consider opening up later on this week,” Andrews said.

The Australian Capital Territory, home to the national capital Canberra, had 13 new cases.

Australia has faired much better than most developed nations, posting just over 50,100 COVID-19 related cases and 999 deaths.

But the national government now insists that the COVID-zero strategy, which had been successful in suppressing earlier outbreaks, is unrealistic after the highly contagious Delta variant reached its shores and is harmful to the economy. Prime Minister Scott Morrison has been urging states to reopen their borders once a vaccination target of 70% of those 16 and older is reached, but virus-free Queensland and Western Australia states have hinted they may not follow.

Nationally just 33.7% of those eligible have been fully vaccinated, although in recent weeks Australia has been racing to inoculate its population. At current rates, 80% could be vaccinated by mid-November.

“Learning to live with the virus is our only hope,” The Age newspaper cited Australia Treasurer Josh Frydenberg as saying on Sunday. “To delay and deny that fact is not only wrong but incredibly unrealistic.”

Victoria supports the federal reopening plan, but the state authorities believe the current outbreak, now at 778 active cases, can be suppressed with a strict lockdown, which involves a nightly curfew for Melbourne, Victoria’s capital.

The June quarter economic growth figures due to be released on Wednesday may hint whether Australia would enter its second recession in as many years, as the September quarter to be released later in the year is broadly expected to show a contraction, reflecting the current outbreaks and lockdowns. – Rappler.com