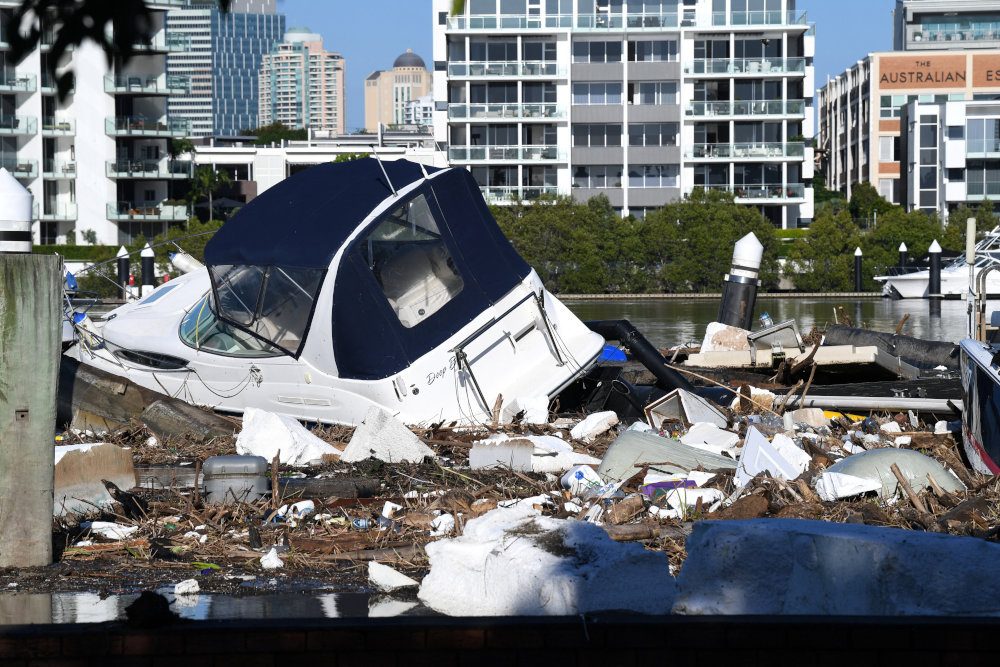 Boats and other debris are seen washed into Hawthorne ferry terminal by the force of floodwaters following heavy rains in Brisbane, Queensland, Australia March 2, 2022. AAP Image/Darren England via REUTERS ATTENTION EDITORS - THIS IMAGE WAS PROVIDED BY A THIRD PARTY. NO RESALES. NO ARCHIVE. AUSTRALIA OUT. NEW ZEALAND OUT.

SYDNEY, Australia – Tens of thousands of Australians fled from their homes and authorities evacuated a hospital on Wednesday, March 2, as more torrential rains battered the east coast.

The storm was expected to hit Sydney, home to more than 5 million people, late on Wednesday and warnings were issued for possible major flooding of rivers in the city’s west.

In Lismore in the north of the state, the bodies of two women aged in their 80s and a man in his 70s were discovered in their flooded homes, and another man was found floating in the street in the town center.

State officials also told of lucky escapes, including a 93 year old woman discovered floating on a mattress 20 centimeters from the ceiling in her Lismore home by a police officer passing by in a boat.

The officer dove through a flooded window to rescue her on a “boogie board”, a child’s version of a surfboard, deputy state premier Paul Toole said.

The area’s member of the state parliament, Janelle Saffin, 67, earlier recounted to media how she swam to safety as her home was submerged.

In nearby Ballina, the main hospital was evacuated. State Premier Dominic Perrottet, who flew over the flooded towns on Wednesday, said 17 local government areas had been declared disaster zones in an “unprecedented situation,” and urged people in Sydney to evacuate if they are given the order by emergency crews.

The wild storm cell has been making its way down from Queensland state, into neighboring New South Wales, and rivers in Sydney were expected to start peaking on Wednesday evening.

“Hundreds of thousands of people have been impacted by this event,” the New South Wales emergency services minister, Stephanie Cooke, told broadcaster ABC. “It is not over by any stretch of the imagination.”

The Bureau of Meteorology said Sydneysiders should brace for months of rain to in a few hours, as officials reported that Warragamba Dam, the city’s main source of water, began overflowing on Wednesday morning.

Major flooding was possible on Wednesday evening in Penrith and North Richmond, large population centers downriver from the dam, the bureau said.

The disaster raised questions about how prepared the country was for being at the forefront of severe climate change, one academic expert said.

“Despite decades of warnings from scientists about climate change, Australia is unprepared for the supercharged weather that it is now driving,” said Hilary Bambrick, adjunct professor at Queensland University of Technology, who led the health impacts assessment for Australia’s national climate change review.

Emergency crews carried out 300 flood rescues after getting 2,200 requests for help overnight. Military helicopters airlifted stranded people from rooftops, while stranded motorists and animals were rescued from a bridge after fast rising waters submerged both ends.

Cassie Skillings, who got stuck on the bridge along with her sister, niece and nephew, told radio station 2GB a resident rescued them in his boat.

“It was just mayhem, once shipping containers started hitting the bridge I called triple zero and they said there was nothing they could do,” she said. – Rappler.com