Cities across China scrambled to install hospital beds and build fever screening clinics on Tuesday, December 20, as the United States said Beijing’s surprise decision to let the virus run free was a concern for the world.

China this month began dismantling its stringent “zero-COVID” regime of mass lockdowns after protests against curbs that had largely kept the virus at bay for three years but at significant costs to society and the world’s second-largest economy.

Now, as the virus sweeps through a country of 1.4 billion people who lack natural immunity having been shielded for so long, there is growing concern about possible deaths, virus mutations, and the impact on the economy and trade.

“We know that any time the virus is spreading, that it is in the wild, that it has the potential to mutate and to pose a threat to people everywhere,” US State Department spokesperson Ned Price said on Monday, adding that the virus outbreak in China was also a concern for global growth.

Beijing reported five COVID-related deaths on Tuesday, following two on Monday, which were the first fatalities reported in weeks. In total, China has reported just 5,242 COVID deaths since the pandemic emerged in the central city of Wuhan in late 2019, a very low toll by global standards.

But there are rising doubts that the statistics are capturing the full impact of a disease ripping through cities after China dropped curbs including most mandatory testing on December 7.

Since then, some hospitals have become inundated, pharmacies emptied of medicines, while many people have gone into self-imposed lockdowns, straining delivery services.

“It’s a bit of a burden to suddenly reopen when the supply of medications was not sufficiently prepared,” said Zhang, a 31-year-old delivery worker in Beijing who declined to give his full name. “But I support the reopening.”

In COVID-hit Beijing, funeral homes with sick workers struggle to keep up 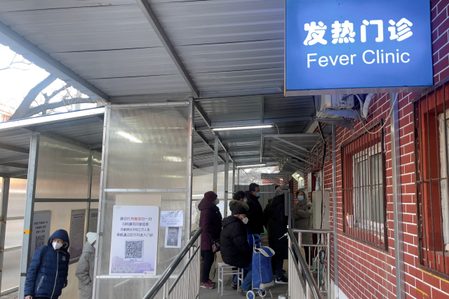 Some health experts estimate 60% of people in China – equivalent to 10% of the world’s population – could be infected over coming months, and that more than two million could die.

In the capital, Beijing, security guards patrolled the entrance of a designated COVID-19 crematorium where Reuters journalists on Saturday saw a long line of hearses and workers in hazmat suits carrying the dead inside. Reuters could not establish if the deaths were due to COVID-19.

In Beijing, which has emerged as the main infection hot spot, commuters, many coughing into their masks, were back on the trains to work and streets were coming back to life after being largely deserted last week.

Streets in Shanghai, where COVID-19 transmission rates are catching up with Beijing’s, were emptier, and subway trains were only half-full.

Top health officials have softened their tone on the threat posed by the disease in recent weeks, a u-turn from previous messaging that the virus had to be eradicated to save lives even as the rest of the world opened up.

They have also been playing down the possibility that the now predominant Omicron strain could become more virulent.

Nevertheless, there are mounting signs the virus is buffeting China’s fragile health system.

Cities are ramping up efforts to expand intensive care units and other facilities for severe COVID-19 cases, the state-run Global Times reported on Monday.

Authorities have also been racing to build so-called fever clinics, facilities where medical staff check patients’ symptoms and administer medication. Often attached to hospitals, the clinics are common in mainland China and are designed to prevent the wider spread of contagious disease in hospitals.

In the past week, major cities including Beijing, Shanghai, Chengdu, and Wenzhou announced they had added hundreds of fever clinics, some in converted sports facilities.

The virus is also hammering China’s economy, expected to grow 3% this year, its worst performance in nearly half a century. Workers and truck drivers falling ill are slowing down output and disrupting logistics, economists say.

A World Economics survey showed on Monday China’s business confidence fell in December to its lowest since January 2013.