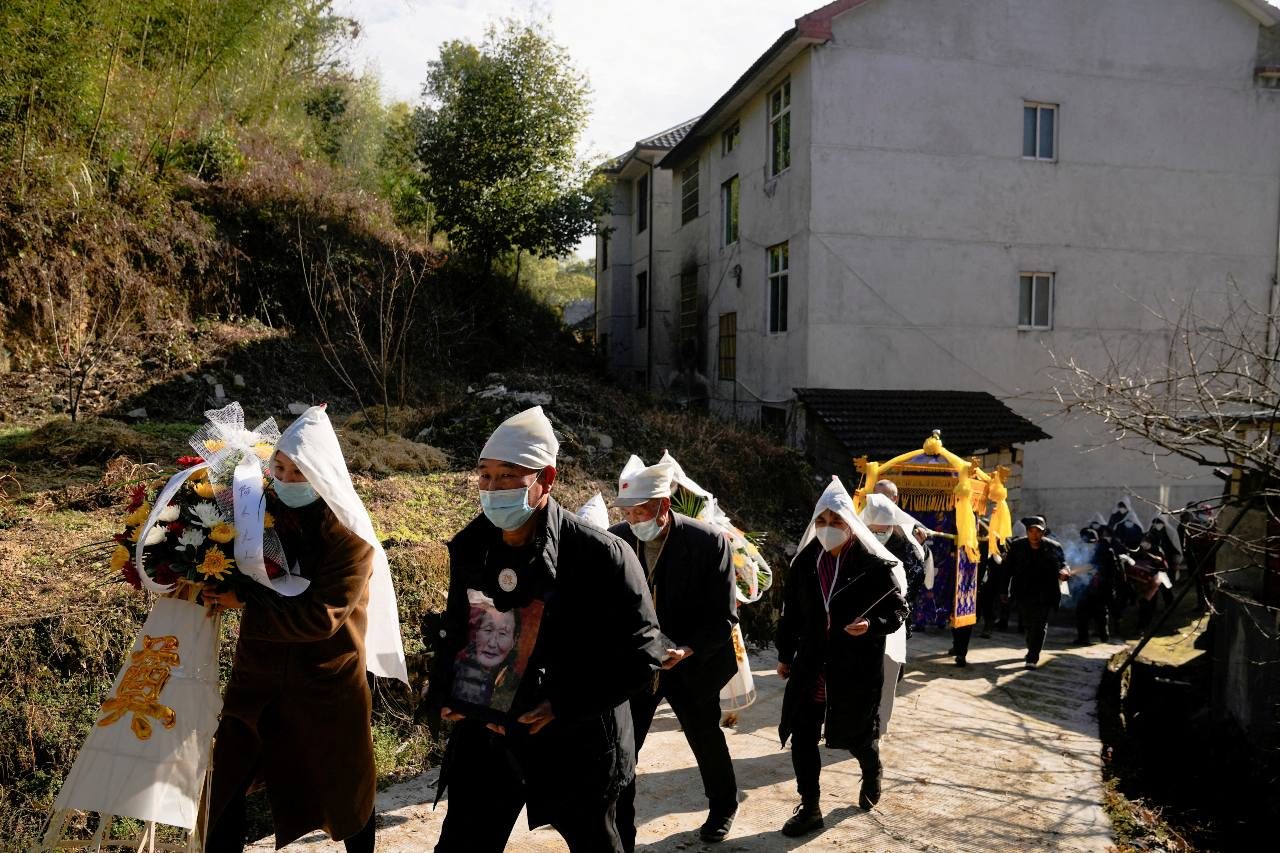 OUTBREAK. Relatives and neighbors attend the funeral of a woman surnamed Liu, as COVID-19 outbreak continues, at a village in Tonglu county, Zhejiang province, China, on January 9, 2023.

Facebook Twitter Copy URL
Copied
Infections are expected to surge in rural areas as hundreds of millions travel to their hometowns for the Lunar New Year holidays, which officially start from January 21

BEIJING, China – The peak of China’s COVID-19 wave is expected to last two to three months, and will soon swell over the vast countryside where medical resources are relatively scarce, a top Chinese epidemiologist has said.

Infections are expected to surge in rural areas as hundreds of millions travel to their hometowns for the Lunar New Year holidays, which officially start from January 21, known before the pandemic as the world’s largest annual migration of people.

China last month abruptly abandoned the strict anti-virus regime of mass lockdowns that fueled historic protests across the country in late November, and finally reopened its borders this past Sunday, January 8.

The abrupt dismantling of restrictions has unleashed the virus onto China’s 1.4 billion people, more than a third of whom live in regions where infections are already past their peak, according to state media.

But the worst of the outbreak was not yet over, warned Zeng Guang, the former chief epidemiologist at the Chinese Center for Disease Control and Prevention, according to a report published in local media outlet Caixin on Thursday, January 12.

“Our priority focus has been on the large cities. It is time to focus on rural areas,” Zeng was quoted as saying.

He said a large number of people in the countryside, where medical facilities are relatively poor, are being left behind, including the elderly, the sick and the disabled.

Authorities have said they were making efforts to improve supplies of antivirals across the country. Merck & Co’s molnupiravir was made available in China from Friday, January 13.

The World Health Organization this week also warned of the risks stemming from holiday traveling.

The UN agency said China was heavily under-reporting deaths from COVID, although it is now providing more information on its outbreak.

“Since the outbreak of the epidemic, China has shared relevant information and data with the international community in an open, transparent and responsible manner,” foreign ministry official Wu Xi told reporters.

Health authorities have been reporting five or fewer deaths a day over the past month, numbers which are inconsistent with the long queues seen at funeral homes and the body bags seen coming out of crowded hospitals.

China has not reported COVID fatalities data since Monday, January 9. Officials said in December they planned to issue monthly, rather than daily updates, going forward.

Although international health experts have predicted at least 1 million COVID-related deaths this year, China has reported just over 5,000 since the pandemic began, one of the lowest death rates in the world.

Concerns over data transparency were among the factors that prompted more than a dozen countries to demand pre-departure COVID tests from travelers arriving from China.

Beijing, which had shut its borders from the rest of the world for three years and still demands all visitors get tested before their trip, objects to the curbs.

Tensions escalated this week with South Korea and Japan, with China retaliating by suspending short-term visas for their nationals. The two countries also limit flights, test travelers from China on arrival, and quarantine the positive ones.

Parts of China were returning to normal life.

In the bigger cities in particular, residents are increasingly on the move, pointing to a gradual, though so far slow, rebound in consumption and economic activity.

An immigration official said on Friday 490,000 daily trips on average were made in and out of China since it reopened on January 8, only 26% of the pre-pandemic levels.

Singapore-based Chu Wenhong was among those who finally got reunited with their parents for the first time in three years.

“They both got COVID, and are quite old. I feel quite lucky actually, as it wasn’t too serious for them, but their health is not very good,” she said.

While China’s reopening has given a boost to financial assets globally, policymakers around the world worry it may revive inflationary pressures.

However, December’s trade data released on Friday provided reasons to be cautious about China’s recovery pace.

Jin Chaofeng, whose company exports outdoor rattan furniture, said he has no expansion or hiring plans for 2023.

“With the lifting of COVID curbs, domestic demand is expected to improve but not exports,” he said.

Data next week is expected to show China’s economy grew just 2.8% in 2022, its second-slowest since 1976, the final year of Mao Zedong’s decade-long Cultural Revolution, according to a Reuters poll.

Some analysts say last year’s lockdowns will leave permanent scars on China, including by worsening its already bleak demographic outlook.

Growth is then seen rebounding to 4.9% this year, still well below the pre-pandemic trend. – Rappler.com