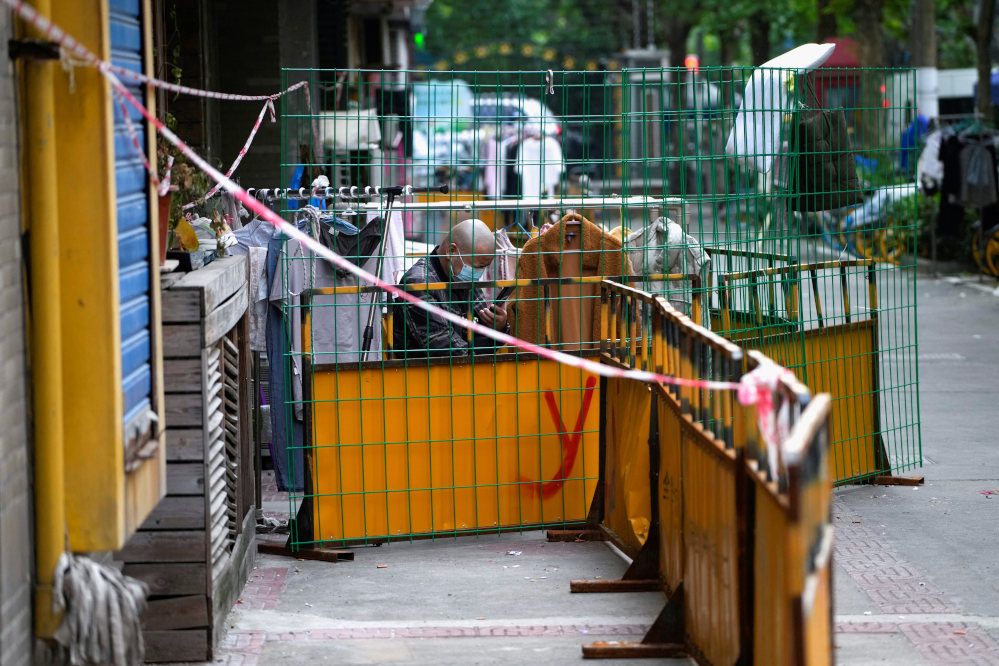 IN SHANGHAI. A resident checks his phone behind the barriers of a blocked area during lockdown, amid the coronavirus disease (COVID-19) pandemic, in Shanghai, China, on May 16, 2022.

Facebook Twitter Copy URL
Copied
Data this week shows the havoc wrought on the economy by the lockdown in Shanghai and the curbs in dozens of other major cities, with retail sales and industrial output plunging at their fastest pace in more than two years in April

Shanghai achieved on Tuesday, May 17, the long-awaited milestone of three consecutive days with no new COVID-19 cases outside quarantine zones but most residents will have put up with confinement for a while longer before a return to more normal life.

For other cities in China that have been under lockdown, a third day with no new cases in the community usually means “zero COVID” status and the beginning of the lifting of restrictions.

The commercial hub of 25 million set out on Monday its clearest timetable yet for exiting a lockdown now in its seventh week, but the plan was met with skepticism by many residents who have seen isolation extended, time and again.

Shanghai plans to resume outdoor activities in stages, with some convenience stores and pharmacies reopening this week, but with most restrictions on movement remaining in place until May 21, after which public transport and other services will resume gradually.

By June, the lockdown should be lifted, but residents will still be asked to get tested frequently.

More people were allowed out of their homes this week, with some joggers and dog walkers spotted. One man was seen fishing in the Shanghai river.

But tall fences remained around many residential compounds and there were almost no private cars on the streets with most people were still confined to their homes.

It was not clear how many shops re-opened this week but delivery apps indicated slightly lower demand for their services on Tuesday.

A social media account ran by the Communist Party’s official People’s Daily newspaper posted photographs on Monday evening that it said it showed breakfast joints, restaurants and hairdressers opening up.

But one social media user described the post as “nonsense”.

“We have been locked in at home for two months … This story is meant for anyone else other than people in Shanghai.”

A video posted by another state-backed media outlet announced the reopening of an Alibaba Freshippo grocery store, showing about 10 members of staff in hazmat suits making heart shapes with their hands, but only two people who looked like shoppers.

A sign on the shop’s door showed customers had to show a negative COVID-19 test, a pass showing they are allowed out of home and an up-to-date mobile phone health app to go in.

Only 20 customers are allowed into the store at any one time.

In all, Shanghai reported fewer than 1,000 new cases for May 16, all inside areas under the strictest controls. In relatively freer areas, the ones monitored to gauge progress in eradicating the outbreak, no new cases were found for a third day.

Beijing’s latest daily caseload was 52, with authorities discovering a few dozen new infections on an almost daily basis despite gradually tightening restrictions over the past three weeks or so.

Dine-in services are banned in the capital, some malls and other businesses are shut, public transport curtailed and many residents have been advised to work from home.

Data this week showed the havoc wreaked on the economy by the lockdown in Shanghai and the curbs in dozens of other major cities, with retail sales and industrial output plunging at their fastest pace in more than two years in April.

China’s uncompromising “zero COVID” policy has placed hundreds of millions of consumers and workers under various restrictions at a time when the rest of the world is lifting them to “live with the virus” even as infections spread.

But the difficulty of eliminating new outbreaks, as shown by Beijing’s struggles, raises concern over the sustainability of any return to normal life in Shanghai and elsewhere once restrictions are lifted.

China’s unswerving commitment to the zero-COVID policy, no matter the economic costs, means questions over the outlook will linger.

“The pace of recovery is likely to depend on the speed of normalization in Shanghai and Beijing and how fast confidence will return to the private sector,” Societe Generale strategists said in a note.

“On both points, the zero-COVID strategy could be a persistent drag.” – Rappler.com