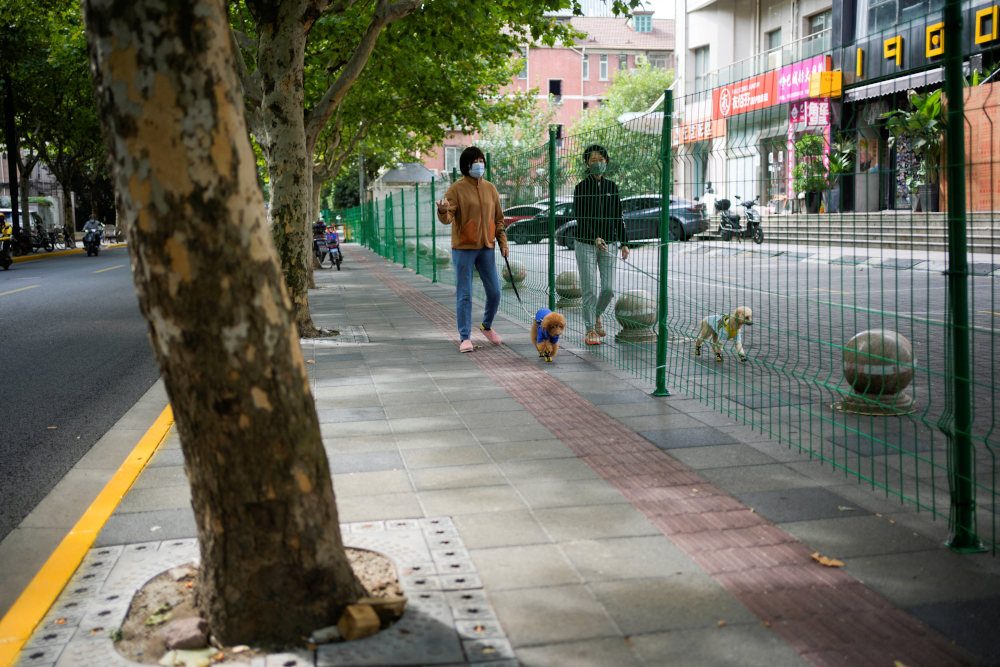 SHANGHAI OUTBREAK RESTRICTIONS. Women with dogs chat through gaps in a barrier at a sealed area, following the coronavirus disease outbreak, in Shanghai, China on October 11, 2022.

SHANGHAI, China – Chinese authorities have stepped up testing in Shanghai and other megacities as COVID-19 infections rise again, as well as extending quarantine times and closing some public spaces where the virus could spread.

Local infections have risen to their highest since August this week, and the uptick is coinciding with increased domestic travel during the National Day “Golden Week” holiday earlier this month.

Nationwide, 2,089 new local infections were reported, the highest since August 20.

While most of the cases have been found in tourist destinations, including scenic spots in the northern region of Inner Mongolia, megacities that are often the source of well-heeled and well-travelled tourists started to report more cases this week.

Shanghai, keen to avoid a reprise of the economically devastating and psychically scarring lockdown in April and May, said late on Monday that all of its 16 districts were to conduct routine testing on their residents at least twice a week until November 10. That’s a step up from once a week presently, a regime imposed after the earlier lockdown was lifted.

Checks on people travelling to Shanghai and places such as hotels, should also be strengthened, municipal authorities said.

The expanding web of COVID-19 preventive measures have already ensnared some people.

Peter Lee, a long-time British expatriate, was out at lunch with his wife and seven-year-old son last week when he was suddenly notified his apartment block was to be locked down for 48 hours.

Lee and his son checked into a hotel, which was then also locked down due to a prior visit by a virus carrier. Lee’s wife, who was planning to join them, had no choice but returned home to be locked in, and then had her lockdown extended.

Father and son are due to be released on Thursday, while Lee’s wife won’t be released until Sunday.

“It might be that we say, we miss home and we miss mum too much and maybe we just go home and just deal with it, but we also lose another weekend then,” Lee told Reuters.

“We are monitoring the situation because it seems like Shanghai is gradually shutting down anyway and if everything starts to close then there won’t be much benefit in being able to come and go.”

Despite the very small caseload versus the rest of the world, and the toll its tough counter-epidemic policies exact on the Chinese economy and its population, the government has repeatedly urged people to accept the measures.

“We must be soberly aware our country is a large one with a population of over 1.4 billion, coupled with unbalanced regional development and insufficient medical resources overall,” state-controlled People’s Daily wrote in a commentary on Tuesday.

“Once a large-scale rebound occurs, the epidemic will spread, and is bound to have a serious impact on economic and social development, and the final price will be higher and losses will be greater.”

The latest COVID-19 restrictions come days ahead of a once-every-five-years Communist Party congress starting on Oct. 16, where Xi Jinping is widely expected to extend his decade-long leadership for another five years. – Rappler.com