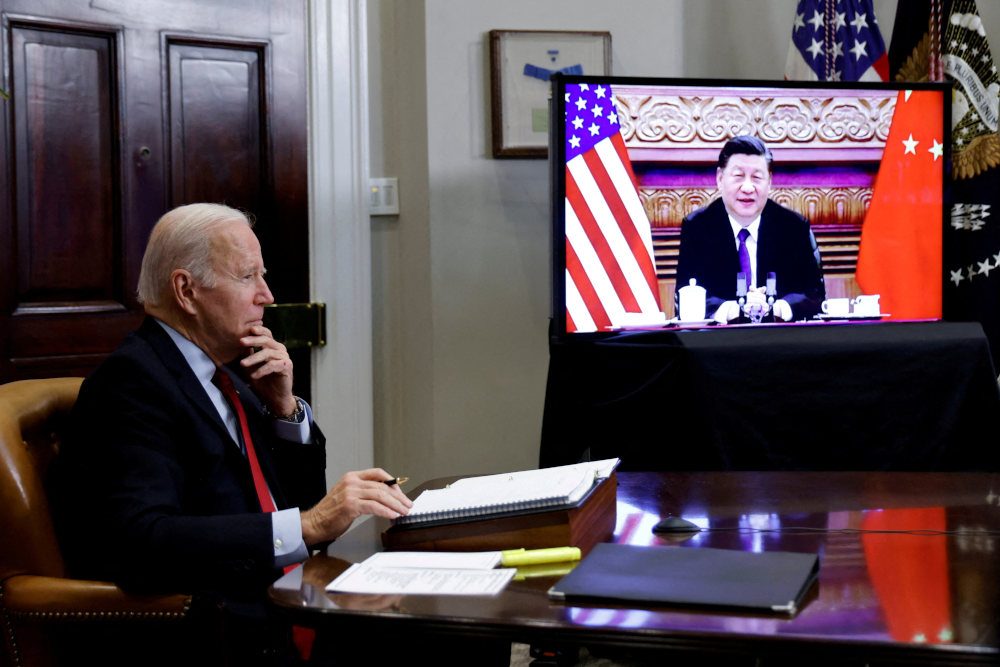 Chinese leader Xi Jinping warned against playing with fire over Taiwan in a call with US President Joe Biden on Thursday, July 28, highlighting Beijing’s concerns about a possible visit to the Chinese-claimed island by US House Speaker Nancy Pelosi.

“Those who play with fire will perish by it,” China’s foreign ministry quoted Xi as telling Biden in their fifth call as leaders. “It is hoped that the US will be cleared eyed about this.”

Xi said Washington should abide by the “one-China principle” and stressed that China firmly opposes Taiwanese independence and outside interference.

Biden told Xi US policy on Taiwan had not changed and that Washington strongly opposes unilateral efforts to change the status quo or undermine peace and stability across the Taiwan Strait, the White House said.

The White House said the long-scheduled call was part of the administration’s efforts to deepen lines of communication with China and “responsibly manage our differences.”

It has been particularly anxious to lower the temperature on Taiwan.

A visit by the House speaker would be a dramatic, though not unprecedented, show of US support for the island, and some analysts worry such a move at a time of fraught US ties with Beijing could spur a major crisis and even unintended clashes.

Scott Kennedy, a China analyst at Washington’s Center for Strategic and International Studies, said leader-level contacts were essential to preventing this.

“One hopes they’ve done enough to avoid a collision in the near term, but it’s clear there needs to be much more frequent and in-depth communication,” he said.

A senior U.S. official said Biden and Xi had discussed the possibility of holding a first face-to-face meeting as leaders and directed their teams to look into this.

Biden stressed the importance of maintaining lines of communication on Taiwan and the two also discussed areas where there was the potential to expand cooperation, including climate change, health security and counter-narcotics, the official said.

The senior US official also emphasized the importance of macroeconomic coordination.

Beijing has issued escalating warnings about repercussions should Pelosi – a Democrat like Biden – visit Taiwan. Xi has vowed to bring Taiwan under Beijing’s control, by force if necessary.

China has given few clues to specific responses it might make if Pelosi makes the trip, which she has yet to confirm.

The US official told reporters Xi had used similar language about Taiwan before and said the two sides acknowledged differing views that have existed for 40 years. “The conversation between the two about Taiwan, it was direct and it was honest,” the official said, while declining to offer more specific details about Biden’s message to Xi.

The call lasted over two hours. US officials had said it would have a broad agenda, including Russia’s invasion of Ukraine, which China has yet to condemn.

Washington follows a “one-China policy” that recognizes Beijing, not Taipei, diplomatically. But it is obliged by US law to provide the democratically governed Taiwan with the means to defend itself, and pressure has mounted in Congress for more explicit support.

Some analysts believe Xi has an interest in avoiding escalation as he seeks an unprecedented third term in office this year. Others say playing up the Taiwan issue could serve Xi as a domestic distraction from China’s slowing economy.

Asked about the call, Taiwan’s representative office in Washington told Reuters it was grateful to Biden “for underscoring the importance of our shared interest in peace and stability in the Taiwan Strait.”

Both Washington and Beijing have been grappling with economic difficulties. China’s $18 trillion economy has been battered by its strict COVID regulations and full urban lockdowns, while the United States is battling surging inflation amid concerns of a recession.

Chinese state media said on Thursday China would try hard to achieve the best possible economic results this year, dropping previous calls that it will strive to meet its 2022 growth target. This followed a high-level Communist Party meeting chaired by Xi.

“Attempts at decoupling or severing supply chains in defiance of underlying patterns would not help boost the U.S. economy. They would only make the world economy more vulnerable,” Xi said, referring to U.S. efforts to end reliance on China for strategic goods.

The Biden administration has been debating whether to lift some tariffs on Chinese goods as a way to ease soaring inflation, but Biden did not discuss potential steps with Xi, the senior US official said.

When Biden last spoke to Xi in March, he warned of “consequences” if Beijing gave material support for Russia’s invasion of Ukraine, and Washington believes this red line has not been crossed since.

However, Taiwan has complained of stepped-up Chinese military maneuvers and just ahead of Thursday’s call, Taiwan’s military said it fired flares to warn away a drone that was possibly probing the defenses of a strategically located and heavily fortified island close to the Chinese coast. Read full story

The last time a U.S. House speaker visited Taiwan was in 1997. As a co-equal branch of government, the U.S. executive has little control over congressional travel.

China has grown far more powerful militarily and economically since then and the White House says the administration has been in touch with Pelosi’s office to make sure she has “all the context” she needs to make decisions about her travel. – Rappler.com