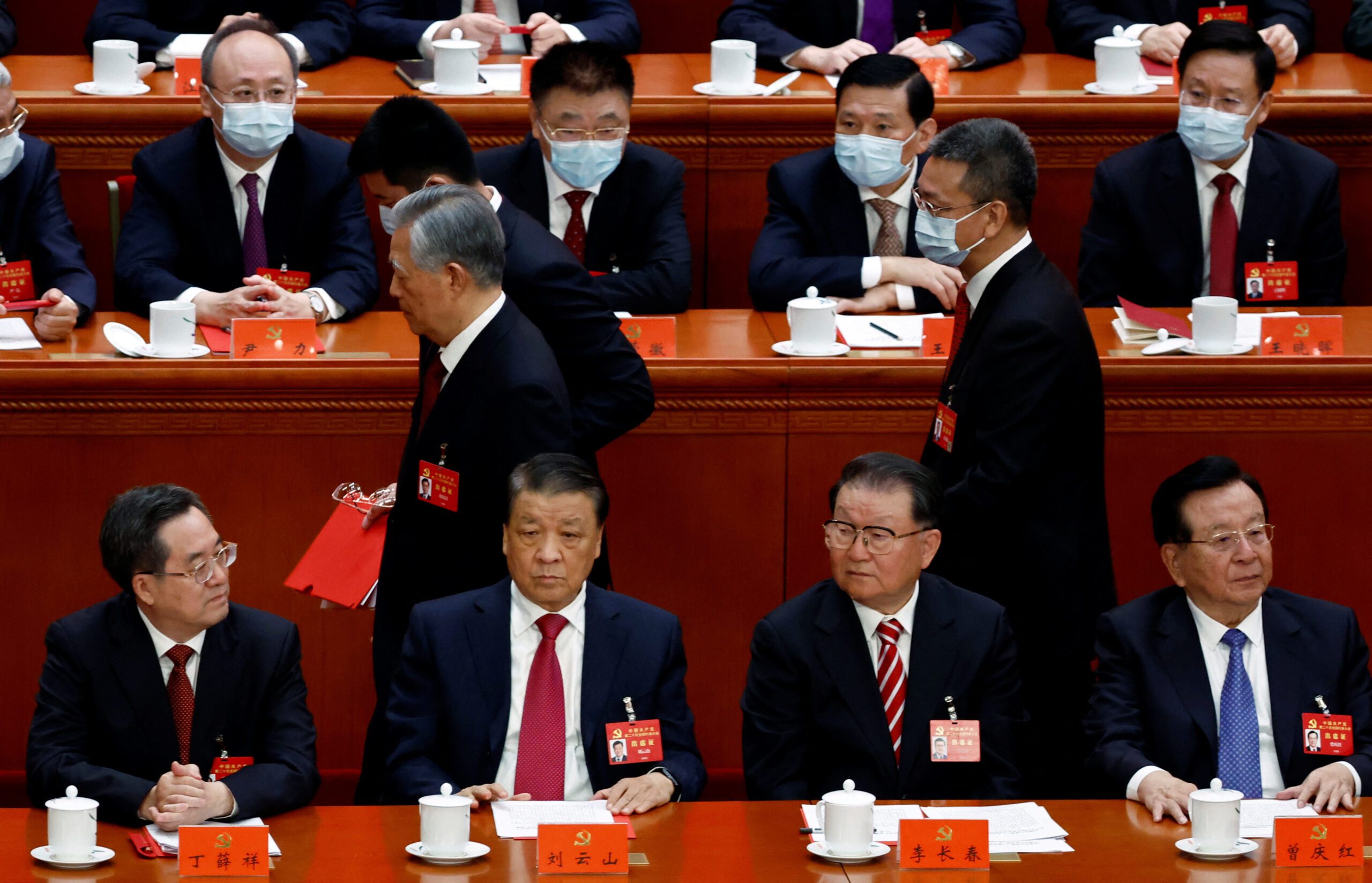 LEAVING. Former Chinese president Hu Jintao leaves his seat during the closing ceremony of the 20th National Congress of the Communist Party of China, at the Great Hall of the People in Beijing, China October 22, 2022.

Facebook Twitter Copy URL
Copied
(1st UPDATE) Looking distressed, Hu appears to resist leaving as the stewards escort him out, turning back to his seat at one point

BEIJING, China – Chinese former president Hu Jintao was unexpectedly escorted out of the closing ceremony of a congress of the ruling Communist Party on Saturday, October 22.

Hu, 79, Xi Jinping’s immediate predecessor, was seated to the left of Xi. He was led off the stage of the main auditorium of the Great Hall of the People in Beijing by two stewards, a Reuters witness at the congress said.

Video footage published by AFP showed a steward repeatedly trying to lift Hu from his seat, drawing concerned looks from officials seated nearby. Hu then put his hand on Xi’s folder, and then Xi put his hand on the folder.

China’s top legislator Li Zhanshu, seated to Hu’s right, gave the former president’s folder to a steward, wiping his own head with a cloth after Hu finally stood up.

Looking distressed, Hu appeared to resist leaving as the stewards escorted him out, turning back to his seat at one point. On his way out, he exchanged words with Xi and patted Premier Li Keqiang, seated to the right of Xi, on the shoulder.

Video of the incident, highly unusual given the meticulous stage management of most such events, was widely shared on Twitter but could not be found on China’s heavily censored social media platforms.

By Saturday evening, however, the comments section of almost all Weibo posts containing Hu’s name were no longer visible, according to a Reuters review.

State media coverage of the ceremony did not include the scene, which occurred as journalists were entering the hall.

Hu had appeared slightly unsteady last Sunday when he was assisted onto the same stage for the opening ceremony of the congress.

The once-in-five-years congress concluded with amendments to the party’s constitution that cements the core status of Xi and the guiding role of his political thought within the party. – Rappler.com