Consulate in Chengdu readies for closure as US, China clash 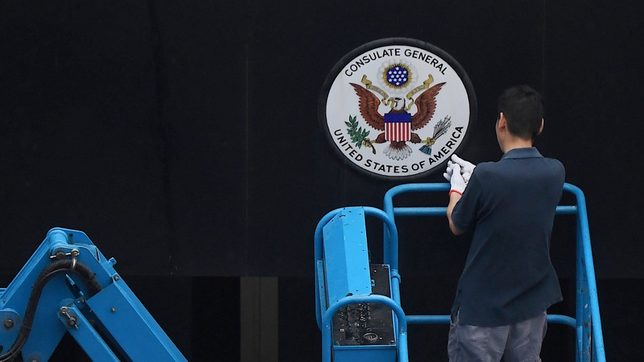 TAKING DOWN THE SIGN. A worker removes the sign at the entrance to the US consulate in Chengdu, in Sichuan province on July 25, 2020. Photo by Noel Celis/AFP

Facebook Twitter Copy URL
Copied
US-China relations spiral when the Chengdu mission is told to shut in retaliation for the forced closure of Beijing's consulate in Houston, with both sides alleging the other had endangered national security

Staff at the US consulate in the Chinese city of Chengdu were busy packing belongings and removing the American insignia from the building on Saturday, July 25, a day after Beijing ordered its closure in a tit-for-tat diplomatic battle with Washington.

US-China relations spiraled this week when the Chengdu mission was told to shut in retaliation for the forced closure of Beijing’s consulate in Houston, Texas, with both sides alleging the other had endangered national security.

The deadline for the Americans to exit Chengdu remains unclear but AFP reporters saw cleaners carting big black bags of rubbish from the consulate Saturday, one of which had split and appeared to contain shredded paper.

At least ten sacks were removed from the building in the early hours of the morning.

A worker on a small crane removed a circular US insignia from the front of the consulate, leaving just an American flag flying.

Other staff were seen moving trolleys around inside, one carrying a large empty metal bin, while some wheeled suitcases.

Beijing says closing the Chengdu consulate was a “legitimate and necessary response to the unreasonable measures by the United States”, and has alleged that staff at the diplomatic mission endangered China’s security and interests.

Washington officials meanwhile said there had been unacceptable efforts by the Chinese consulate in Houston to steal US corporate secrets and proprietary medical and scientific research.

The last Chinese diplomats left the Houston consulate on Friday as a 72-hour deadline to close the mission passed. Officials there were seen loading large sacks of documents and other items onto trucks and throwing some in bins.

Tensions have soared between the two powers on a range of fronts including trade, China’s handling of the coronavirus and a new security law for Hong Kong, with the US this week warning of a “new tyranny” from China. – Rappler.com