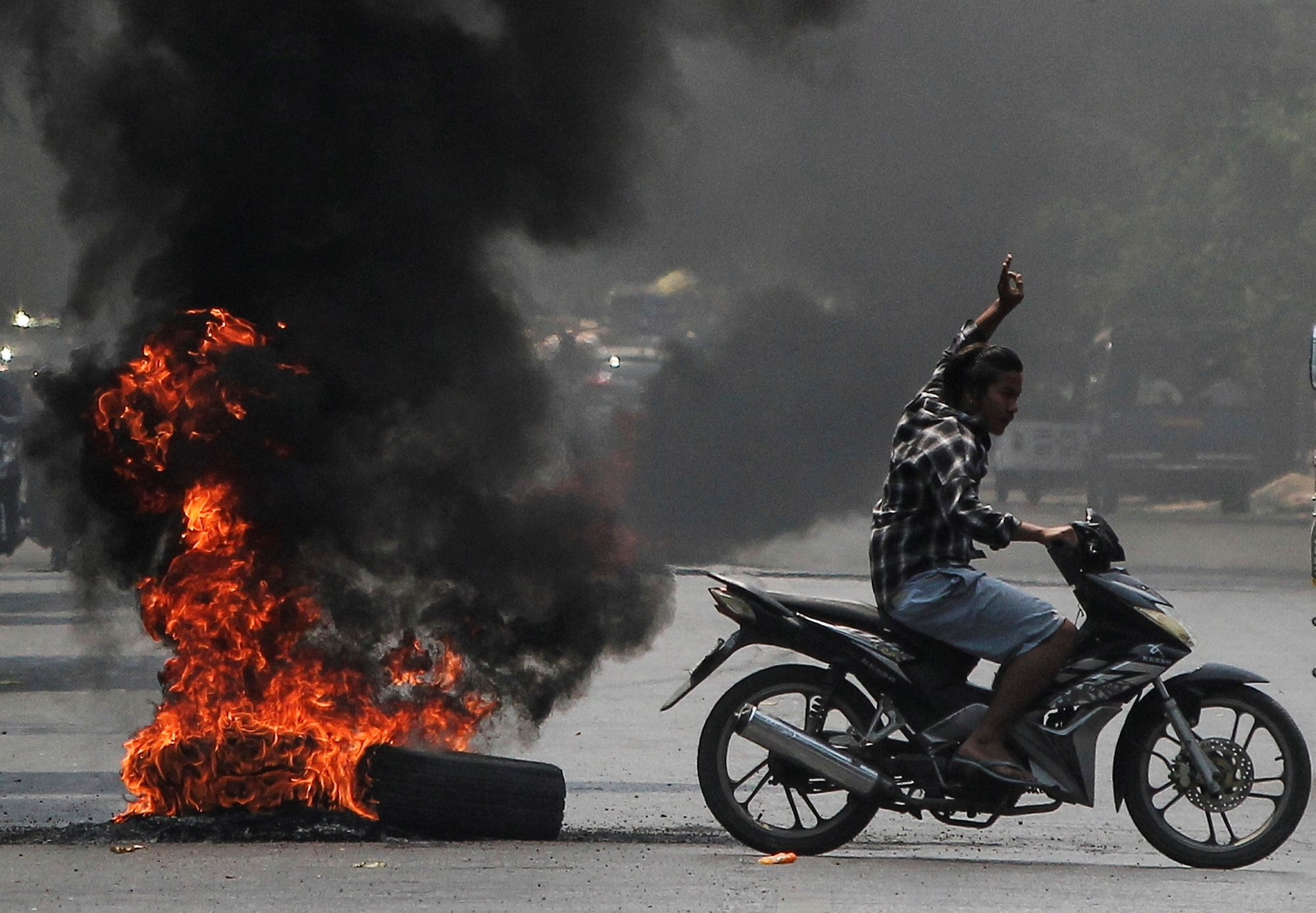 A man flashes the three-finger salute as he passes burning tires during a protest against the military coup, in Mandalay, Myanmar April 1, 2021. REUTERS/Stringer TPX IMAGES OF THE DAY

Increased instability in Myanmar since a military coup a year ago has seen a surge in narcotics production there and trafficking into Southeast Asia and beyond a senior official from the United Nations Office on Drugs and Crime
(UNODC) told Reuters.

Authorities in Laos, Thailand and Myanmar seized at least 90 million methamphetamine tablets and 4.4 tons of crystal methamphetamine last month, most of it manufactured in the remote border areas of Myanmar’s Shan State, according to the UNODC.

“Meth production increased last year from already extreme levels in northern Myanmar and there is no sign it will slow down,” said Jeremy Douglas, UNODC’s regional representative in Southeast Asia.

Chaos and instability work for traffickers.

“Drugs and conflict remain inseparable in Myanmar, one feeding the other,” he said, adding: “Chaos and instability work for traffickers.”

Economic hardship has gripped Myanmar since the coup and Douglas said farmers without options in Shan State were likely to return to opium cultivation in the near- to medium-term.

In neighboring Thailand, a traditional conduit for illicit drugs produced in Myanmar, 520 million methamphetamine tablets were seized in the fiscal year from October 2020 to September 2021, up from 361 million in the previous 12 months, according to data from its Office of Narcotics Control Board (ONCB).

Crystal meth seizures decreased by 22% to 21.6 tons compared with 2020 but were still significantly higher than the
18.2 tons intercepted by authorities in 2019.

Drug production in the Golden Triangle, as the area encompassing northern Myanmar and parts of Laos and Thailand is known, is run by Asian crime gangs in partnership with armed factions from some of Myanmar’s ethnic minorities. The illicit drugs they manufacture dominate the Asia-Pacific market, UNODC has found.

Amid the chaos and civil unrest in Myanmar that followed the coup, some of the ethnic minority factions involved in the drug trade have expanded their territory, analysts and officials told Reuters.

In recent weeks, the United Wa State Army (UWSA) – one of Myanmar best-armed ethnic minority forces that controls large areas from the north of Shan State – has moved forces south along with smaller, allied militias, expanding their territorial control of the state, three sources familiar with the incursions said.

Territory controlled by the UWSA has long been used for illicit drug production, although other armed groups are also involved in the trade, Douglas said.