STOP. A woman holds a placard during a rally against the military coup and to demand the release of elected leader Aung San Suu Kyi, in Inle Lake, Myanmar February 11, 2021 in this picture obtained by Reuters.

Facebook Twitter Copy URL
Copied
According to one provision of Myanmar's Constitution, certain positions are suitable for men only
as published bythe conversation

On February 1, 2021, Myanmar’s military seized power. While a dramatic event, the coup was a continuation of old power structures.

Myanmar’s decade-long period of political transition, peace-building, and democratic elections fell short of freeing the country from military control. Despite its female leader, the exclusion of women throughout the failed transition to democracy is partly why Myanmar was unable to create deep institutional change.

Aung San Suu Kyi’s image as “mother of the nation” depicted her as a caring matriarch. This image stood in contrast with the harsh patriarchy of military rule. But politics in Myanmar defy stereotypes and simple classifications.

Suu Kyi may have been the face of the era of democratic reforms, but in reality, the transition was initiated and controlled by the military. Suu Kyi’s legacy as a Nobel Peace Prize laureate was permanently stained by her handling of the Rohingya genocide, and her projected femininity and democratic idealism should not be confused for feminism or inclusive democracy.

Gender can still help us understand politics in Myanmar, however — just not along these lines. Instead, a different story emerges by looking at the exclusion of women in key stages of the transition process. It is a tale of the persistence of patriarchal power throughout the decade of democratization.

The governing patriarchy is on full display in the 2008 Constitution that spurred Myanmar’s decade of democracy. According to one provision of the Constitution, certain positions are suitable for men only. Women are excluded from key ministerial positions, and a major government agency, the Union Civil Service Board, regularly uses this clause of the Constitution to block applications from women for both mid- and junior-level positions. This caps decades of extreme repression of women.

The Myanmar army is infamous for its systematic targeting of ethnic minority women and girls for sexual violence, and the militarization of the country has contributed to widespread discriminatory practices.

The peace process (2011-15) between the Tatmadaw — Myanmar’s military — and ethnic armed groups that have long challenged its hold on the country was a deal involving men. Only 4 women served inconsistently on senior negotiation delegations (less than 6%). Women were also largely excluded from ceasefire structures and monitoring teams.

Other important institutions also failed to modernize during the transition. Instead, they generally mirrored conservative and traditional attitudes. Women’s representation in parliament gained roughly 5% in both the 2015 and 2020 elections, growing from less than 5% in 2014 to just over 15% in November’s contested election. Important as this progress was, equality was ultimately handcuffed by the embedded patriarchy of the military.

The military orchestrated the democratic transition according to rules designed to give them continued influence. In so doing, they hamstrung women’s political inclusion.

The Tatmadaw also retained the right to appoint 25% of legislative seats. A military background is required for certain ministerial positions. Since women were only recently allowed to serve in the military, the requirement effectively makes them ineligible to hold these offices.

There were only two women among the 166 military appointees following the 2015 elections. The military appointed only 10% of women to national, state, and regional legislative chambers in 2020. The military-backed Union Solidarity and Development Party (USDP) only elected one woman to both the 2015 and 2020 parliaments. The military quota makes reform unlikely because any constitutional amendment to address discrimination requires 75% approval.

The patriarchy of the military is reflected in the non-military political parties, notwithstanding Suu Kyi’s leadership. The parties are gatekeepers to women’s representation. But they have generally not taken steps to improve women’s political participation.

COVID coup: How Myanmar’s military used the pandemic to justify and enable its power grab 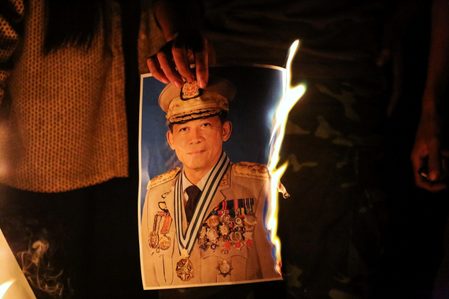 We are not arguing more women in Myanmar politics would have prevented the coup. There is no such thing as a quick fix to eliminate the country’s history of militarization.

But we do suggest that women’s relative absence from positions of influence helped enable the military to maintain its grip on power.

Understanding this connection is important for 3 reasons. First, giving women a seat at the table makes a difference. Research shows that equality and inclusion foster sustainable peace, meaning that the attitudes of the participating men are also required. Rather than just armed organizations, civil society groups and women’s organizations should be included in transitions from war to peace.

Second, the women’s movement in Myanmar offers new models for collaborative governance. Relegated to the shadows, women’s groups nonetheless organized to contribute to the peace process through informal channels, including back-channel negotiation. They have shown a path for bridging ethnic differences to work towards common goals.

Finally, by tracing the path of patriarchy in Myanmar, we can better understand what brought about the coup. As we grapple with why the military staged a coup at this particular moment in time, it should be seen in light of the country’s militarized recent history and the power dynamics of the transition. Women’s rights organizations are currently mobilizing and are putting it out there quite simply: a militarized Myanmar is a threat for women.