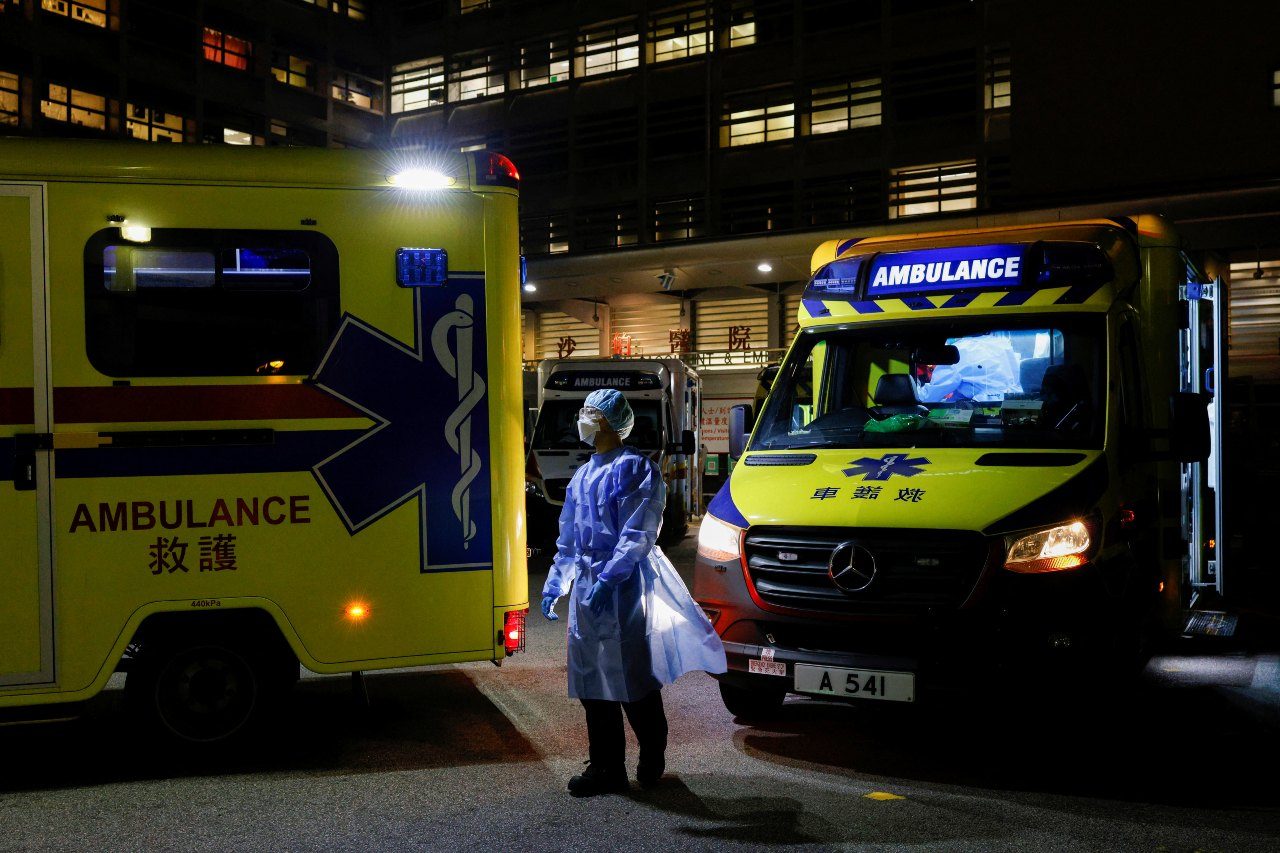 COVID-19 IN HONG KONG. A medical worker wearing personal protective equipment stands between ambulances outside the Accident and Emergency department, following the COVID-19 outbreak, in Hong Kong, on March 3, 2022.

While Hong Kong clings to its “zero-COVID” policy, frustrations in the city are boiling over, workplace morale is being hit hard and families are splitting as a growing number of people, especially expatriates, abandon the global financial hub.

Hong Kong saw a net outflow of more than 71,000 people in February, the most since the beginning of the pandemic, according to government data, compared with 16,879 in December.

Senior Western diplomats told Reuters they are inundated with visa requests for the Hong Kong spouses of foreign nationals, while some travel agents say they are overwhelmed with flight bookings.

For many like Ileanna Cortes Martinez, who has lived in Hong Kong for more than a decade, the stringent rules that include restrictions on global travel and bans on gatherings of more than two people, have made life in the city unbearable.

“They’re making it impossible to live here,” said Cortes Martinez from California, adding that she and her husband, a pilot in the private jet sector, bought a flat in the city last year as they considered it home, but are now leaving.

Mixed messages from the government and almost daily tweaks to policy have triggered a backlash from many residents.

Children being hospitalized alone with no family members and summer holidays brought forward for some schools have also prompted many families to book their departures sooner.

Most major employers have reverted to work-from-home requirements, in line with government recommendations, as Hong Kong reports record daily cases of close to 60,000, after a three-month streak of no infections at the end of 2021.

“Hong Kong is like a prison right now,” one investment banker at a Western firm who is working from home told Reuters. He declined to be identified as he is not permitted to speak to media.

Streets in the heart of the financial center are eerily quiet, restaurants are shuttered or empty, and supermarket shelves bare as people snap up groceries amid fears of a city-wide lockdown. Hong Kong leader Carrie Lam has said there are no plans for a “complete lockdown.”

Divided expat families are becoming increasingly common as one parent stays to work, while the other takes the children home, many fearful of being separated from children or forced into government quarantine centers if they stay.

“It’s untenable to be in Hong Kong when every time you have to leave to come back you have to sit in a hotel room for two weeks if not longer,” said one lawyer, who declined to be identified due to the sensitivity of the issue.

“My wife and kids are in Australia, they want to come up but they can’t. You just can’t have a family life here.”

Some people are offloading furniture and cars in firesales as they rush to leave.

“A lot of people are just grabbing clothes and leaving. And personally, that’s what I’m going to do,” said Cortes Martinez, who is leaving Hong Kong at the end of the month with her 12-year-old daughter. Her husband left in November.

Hong Kong has recorded about 350,000 cases of COVID-19 since the coronavirus emerged in the Chinese city of Wuhan in late 2019 and some 1,400 deaths, still far fewer than many other cities.

“You see the footage of children being separated, the lockdowns coming, school is online for the foreseeable future, it’s no place to have kids right now,” one banker at a foreign bank told Reuters, also declining to be identified.

Bans on flights from nine countries including the United States, Britain and Australia are in place until April 20, leaving some Hong Kong residents who had left temporarily stranded, unable to get back in.

Hong Kong remains one of only a few places in the world to make hotel quarantine for two weeks for returning travelers mandatory.

A mother of two who left for Australia with the children while her husband stayed to work said she got out because of fear of being hospitalized or put in a quarantine center.

“We’ve been more afraid of the treatment than getting COVID-19. The community centers, they look like something out of a horror movie,” she said, referring to quarantine facilities. – Rappler.com