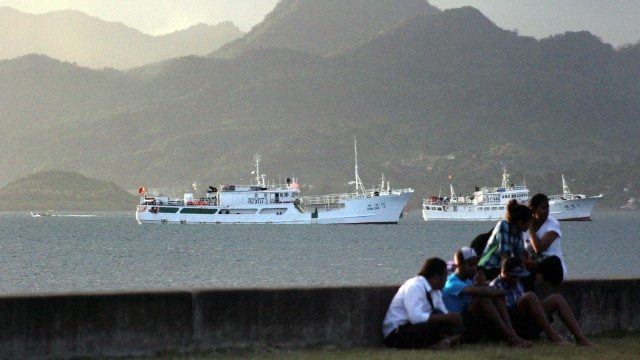 FIJI. Locals sit on a wall situated on the foreshore of the harbor in the Fiji capital of Suva August 24, 2014.

Fiji is waiting for its president to recall parliament so lawmakers can vote for a new prime minister after a national election last week showed no party received a clear majority.

Bainimarama’s Fiji First has not conceded defeat, while a coalition of three parties say they have a combined majority and have agreed on People’s Alliance leader Sitiveni Rabuka as prime minister.

Bainimarama, who seized power in a military coup in 2006, said the military “has been deployed to complement the Police in maintaining law and order.”

“Reports of harassment suffered by our citizens and violence targeted at Indo-Fijian homes and businesses in the wake of the election are deeply disturbing,” he said in a statement on Facebook.

Opposition parties have disputed reports of violence against Fiji’s large ethnic Indian population in the wake of the election, and have called for evidence of this.

Fijian Indians posted messages to Twitter under the hashtag FijiIsUnited saying “I fall in the minority group in Fiji & I have felt completely safe”.

Police Commissioner Sitiveni Qiliho said he met on Thursday with Bainimara ma , the minister for defence and policing and the military commander and agreed for military personnel “to assist Police with the maintenance of law and order, amidst growing concerns of racial tension.”

The Pacific island nation, with a population of 900,000, had a history of military coups before constitutional reform in 2013 to remove a race-based voting system that favoured indigenous Fijians over ethnic Indians – mostly descendants of workers brought to sugar cane farms in the 19th century.

Bainimarama has been prime minister for 16 years, taking power in a coup, and later winning two democratic elections in 2014 and 2018. Rabuka is also a former coup leader.

Rabuka on Twitter urged people to “respect the rule of law, and to allow the political process to continue without hindrance.”

Fiji’s President Ratu Wiliame Katonivere has until January 2 to summon parliament, media outlet Fiji Village reported, citing a letter sent by Katonivere to the coalition partners. The prime minister must be voted in by more than 50% of lawmakers on the parliament floor.

“We encourage all parties to allow the constitutional process to play out,” New Zealand’s Foreign Minister Nanaia Mahuta said New Zealand said in a statement.

However SODELPA’s board must meet again on Friday, December 23, after the validity of the decision to back the coalition was challenged by the party’s general secretary and Fiji’s Supervisor of Elections.

At a media conference earlier on Thursday, National Federation Party leader Biman Prasad said Fiji First’s secretary general Aiyaz Sayed-Khaiyum, who was the Attorney General in Bainimarama’s government, was “trying to create fear in the minds of people” and should accept the election result.

“He is not accepting they lost this election, people voted for change,” Prasad said.

Fiji has been pivotal to the region’s response to strategic competition between China and the United States, and struck a deal with Australia in October for greater defence cooperation, although China has been a significant donor of military equipment to Fiji in the past.

Anna Powles, from the Centre for Defence and Security Studies at Massey University in Wellington, said the international community will be watching carefully how the democratic process unfolds.

“Given Fiji’s recent history there will certainly be concern on the ground in Fiji over the coming days,” she added.

Powles said the drivers of the current events were domestic political factors rather than part of a broader geopolitical situation. – Rappler.com