North Korea has not responded to offers of aid from South Korea and international vaccine-sharing program, but prefers US-made Moderna and Pfizer over China’s Sinovac or British-Swedish Astrazeneca shots, according to South Korean officials.

Both the US vaccines rely on technology known as mRNA, and require super-cold storage. Sinovac or AstraZeneca vaccines can be transported and stored at normal refrigerator temperatures. 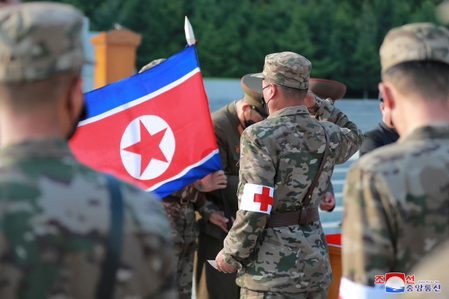 “Moderna and Pfizer vaccines require a low-temperature storage system, which North Korea does not have,” said Moon Jin-soo, director of the Institute for Health and Unification Studies at Seoul National University. “It would require a ton of additional materials to use them for inoculation.”

South Korean officials have said it is not clear whether the North has access to such storage systems.

In March, the UN Security Council gave a sanctions exemption to the UNICEF to ship such “cold-chain” equipment to North Korea to assist with vaccinations.

The items included three walk-in cold rooms for “storage of routine immunization vaccines,” though it was not immediately confirmed whether they had been shipped amid strict border restrictions.

According to the North’s latest Voluntary National Review report presented to the UN last year, only 34.6% of its population had access to electricity, and the country’s roads and railways were, “in general, not in standard condition.”

Given those conditions, only few cities could accommodate the cold storage units, experts said.

Whether North Korea can mobilize trained medical personnel on a large scale for a nationwide inoculation campaign also remains an open question.

“You need a system and trained medical experts to distribute the doses and inject the shots. I doubt the North has that,” said Jacob Lee, a professor of infectious diseases at South Korea’s Hallym University School of Medicine.

North Korea has inoculated children for diseases such as tuberculosis with the help of international organizations. But UN aid agencies and most other relief groups have pulled out of the country amid extended border shutdowns.

South Korea’s foreign minister, Park Jin, said on Tuesday he would ask Washington for sanctions exemptions to send needed equipment to the North if it asks.

“The most important thing is speed,” said Shin Young-jeon, a professor at Hanyang University’s College of Medicine in Seoul.

“The virus is already spreading fast, and without swift vaccination and immunity building, the death toll could soar to an uncontrollable level.” – Rappler.com