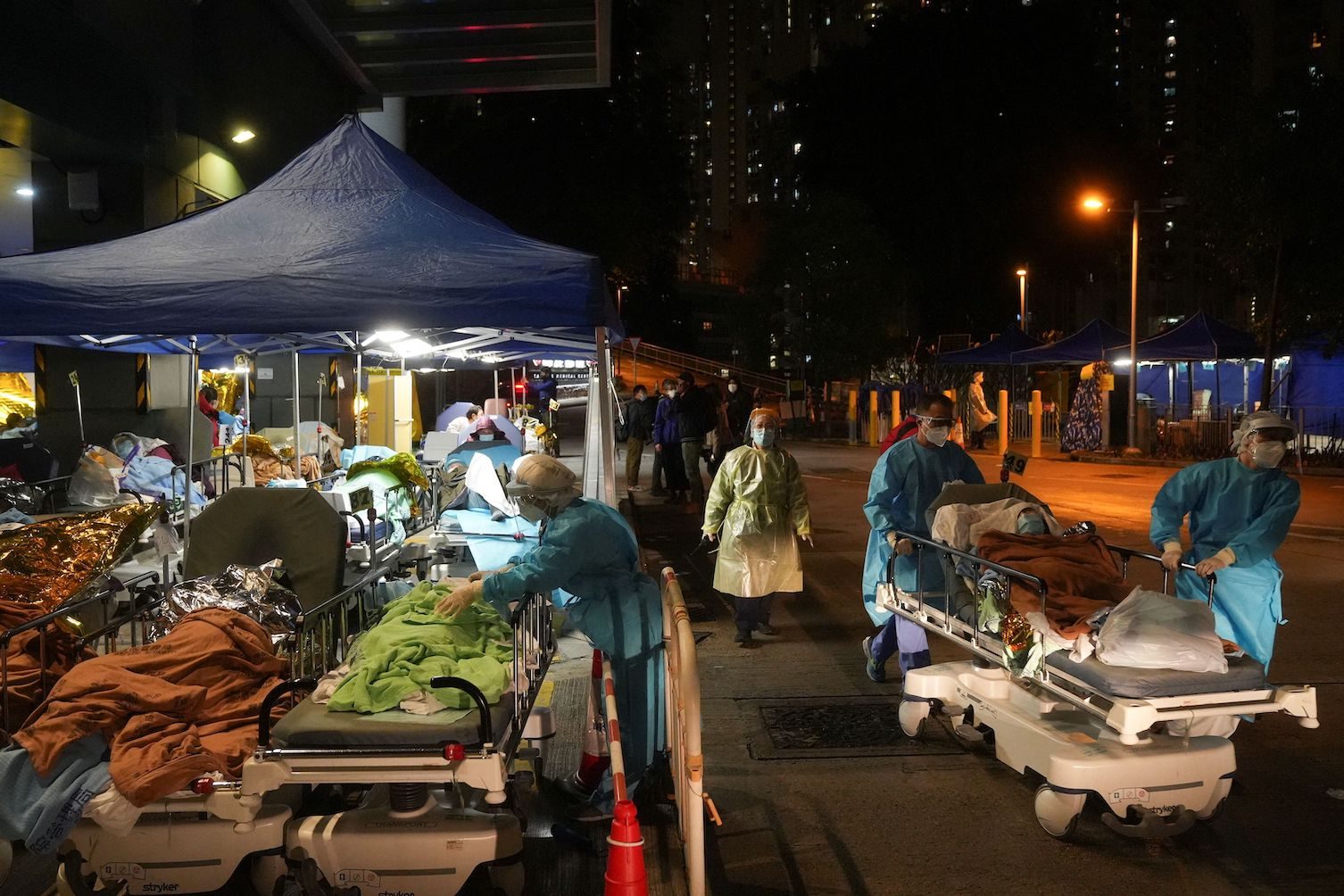 Facebook Twitter Copy URL
Copied
Hospitals are overwhelmed with some patients, including elderly ones, left lying on beds outside in chilly, sometimes rainy weather, in shocking scenes in the Chinese-controlled city

HONG KONG – Hong Kong’s coronavirus battle intensified on Thursday, February 17, as authorities reported that new cases had multiplied by 60 times so far this month and media reported that testing would become compulsory for everyone in the global financial hub from March.

Hospitals are overwhelmed with some patients, including elderly ones, left lying on beds outside in chilly, sometimes rainy weather, in shocking scenes that prompted an apology from authorities in the Chinese-controlled city.

Schools, gyms, cinemas and most public venues are shut. Many office employees are working from home. But, many residents are fatigued by the harsh restrictions imposed to protect them against the pandemic, even as most other major cities in the world adjust to living with the virus.

Health authorities reported a record 6,116 confirmed cases on Thursday, up from 4,285 the previous day, with a further 6,300 preliminary positive cases. That takes the total since January to more than 16,600. They reported 24 new deaths.

The jump in cases is the biggest test yet of the city’s “dynamic zero COVID” policy, but leader Carrie Lam said this week that the city “cannot surrender to the virus.”

Some media reports, citing unidentified sources, said the government planned to test up to 1 million people each day from March and those who failed to comply would be fined HK$10,000 ($1,282).

The government did not respond to a request for comment.

“Because of the severe number of cases we need to speed up admission to hospitals and community isolation facilities,” Undersecretary for Food and Health Chui Tak-yi told reporters. “The government is trying to ease all these bottlenecks.”

In a move to free up beds for isolation, Lam said late on Wednesday that she had spoken to local hotel owners and planned to make up to 10,000 hotel rooms available for COVID-19 patients.

Lam’s comments came after Chinese President Xi Jinping told Hong Kong’s leaders that their “overriding mission” was to stabilize and control the coronavirus.

Lam later welcomed several mainland health experts who arrived from the southern Chinese city of Shenzhen, and said the city planned to ramp up its testing capability.

“City-wide virus testing is a plan we are considering now,” Lam told reporters.

The surge in cases and tighter rules have battered the city’s retail sector, with the Retail Management Association (HKRMA) on Thursday saying retail traffic was down 40% from December.

“If the pandemic gets worse and if our rents are kept at the level now … we will not survive,” said Annie Tse, chairwoman of HKRMA. “Since protests and COVID it’s been almost three years, how much more cash can we burn?,” she said, referring to anti-government demonstrations in 2019.

The association, which represents around 9,000 retail outlets and employs over half of the local retail workforce, urged the government to force developers to provide rent relief for tenants and include the sector in an anti-epidemic fund.

HKRMA expects flat year-on-year growth for retail sales for the January-June period, and said growth would easily sink into negative territory in the second half if the situation persists.

But the scale and speed of the highly contagious Omicron variant of the virus has left authorities scrambling. Hospitals are operating at maximum or over capacity and long queues have formed outside testing centers, with some people waiting hours.

Authorities said they could no longer keep up their testing and isolation mandates, resulting in a backlog that could not keep pace with the daily infection numbers.

China has said it would help Hong Kong bolster its testing, treatment and quarantine capacity, and secure resources from rapid antigen kits and protective gear to fresh vegetables.

Hong Kong has recorded around 35,000 infections since the start of the pandemic, and more than 250 deaths, far fewer than other similar-sized major cities.

However, medical experts have warned that daily cases could surge to 28,000 by the end of March amid worries about high levels of vaccine hesitancy among the elderly.