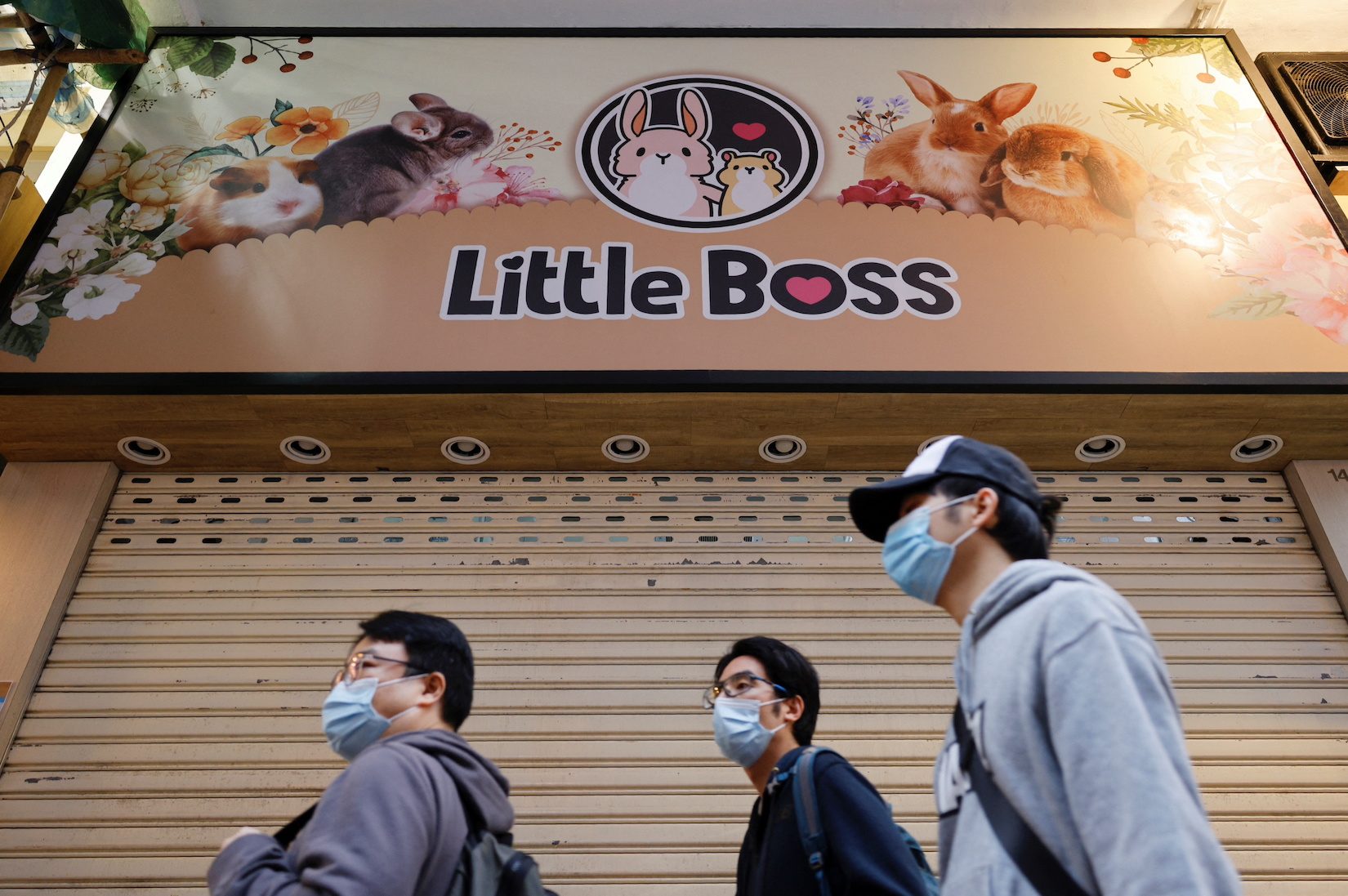 People stand in front of a temporarily closed pet shop after the government announced to euthanize around 2,000 hamsters in the city after finding evidence for the first time of possible animal-to-human transmission of coronavirus disease (COVID-19) in Hong Kong, China, January 18, 2022.

Facebook Twitter Copy URL
Copied
The outbreak of Delta variant cases in humans linked to the shop worker prompts tests on hundreds of animals in the Chinese-ruled territory, with 11 hamsters showing up positive

HONG KONG – Hong Kong ordered a cull of 2,000 hamsters on Tuesday, January 18 and warned pet owners not to kiss animals after a cluster of COVID-19 cases was traced to a pet shop.

The outbreak of Delta variant cases in humans linked to the shop worker prompted tests on hundreds of animals in the Chinese-ruled territory, with 11 hamsters showing up positive.

Hong Kong’s pet rodent clampdown echoes the mainland’s zero-tolerance approach to COVID-19 even as much of the world shifts to living with the disease.

Health Secretary Sophia Chan stressed at a news conference that there was no evidence domestic animals can infect humans, but authorities were anyway acting out of caution to ban imports and sales of pet rodents.

Various pet shops across Hong Kong were shuttered, including the store at the heart of the cluster in the city’s bustling Causeway Bay district. Men in protective gear entered the shop while police and agriculture bureau cars parked outside.

Little Boss, the operating company, announced the closure of some other branches too for disinfection.

Hong Kong’s hamsters are not the only animals infected in the two-year pandemic. There have been cases in dogs and cats too, though scientists say there is no evidence animals play a major role in human contagion.

Hong Kong has been collecting samples from other pets including rabbits and chinchillas, but only the hamsters have tested positive. They were all imported from the Netherlands,caccording to local broadcaster RTHK.

Leung said about 2,000 hamsters in 34 pet shops and storage facilities would be put down “humanely” as it was impossible to quarantine and observe each one. Anyone who purchased a hamster after December 22, 2021 should hand them over to authorities for culling and not leave them on the streets, he added.

A hotline for enquiries about hamsters was being set up, while some 150 of the pet shop’s customers were being sent into quarantine, officials said.

Last September, three pet cats that tested positive for coronavirus were put down in the Chinese city of Harbin, bringing a social media backlash.

Elsewhere, Denmark culled millions of mink in 2020 to curb COVID-19 mutations. And some Russian regions have inoculated animals against COVID-19 after Moscow said it had registered the world’s first vaccine for animals following tests with dogs, cats, foxes and mink.

Nikolaus Osterrieder, dean of the Jockey Club College of Veterinary Medicine and Life Sciences at the City University of Hong Kong, said human-to-animal-to-human transmission chains are rare but do happen as with mink cases.

“It is obviously a drastic measure but one that is a consequence of zero Covid (rules),” he said of Hong Kong’s moves. “Hamsters are very susceptible to SARS-CoV-2 and can produce large amounts of virus.”

After three months without any local transmission, Hong Kong has seen dozens of new coronavirus cases in humans this year, triggering fresh curbs on flights and social life.

Thousands of people have been sent to a makeshift government quarantine facility. Most of the new cases are of the highly-contagious new Omicron variety, though the cluster traced to a pet shop worker was Delta. – Rappler.com