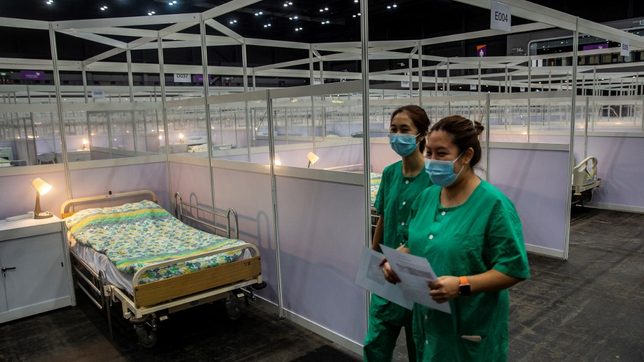 FIELD HOSPITAL. Medical workers walk past rows of beds at a temporary field hospital set up at Asia World Expo in Hong Kong on August 1, 2020. Photo by Isaac Lawrence/AFP

Facebook Twitter Copy URL
Copied
The opening of the hospital comes a day after Carrie Lam announced the postponement of upcoming legislative elections for a year, saying the decision is purely protecting public health and has 'nothing to do with politics'

The financial hub had been a poster child for tackling the coronavirus, with local transmissions all but ended by early summer.

But since July the pathogen has returned, with some cases brought in by the tens of thousands of people who were exempted from a mandatory quarantine imposed on most arrivals.

The opening of the hospital comes a day after city leader Carrie Lam announced the postponement of upcoming legislative elections for a year, saying that the decision is purely protecting public health and has “nothing to do with politics”.

More than 2,000 new infections have been detected since the start of July – 60% of the total since the virus first hit the city in late January.

The new makeshift hospital set up at the city’s AsiaWorld-Expo exhibition centre near the airport, will take in COVID-19 patients aged from 18 to 60.

“Our goal is to triage the patients from the community and provide them with appropriate treatment and hospitalisation arrangement,” Dr Larry Lee from the Hospital Authority told media, adding that around 20 to 30 patients are expected to be admitted on the first day.

Lee said that arriving patients will go through X-rays as well as blood, saliva and heart tests. If found unstable, patients will be sent to hospitals while stable ones will get treatment and put under medical observation at the facility.

New daily infections have been above 100 for the past 10 days with total infection numbers rising to 3,272 on Friday. The death toll rose from 7 to 29 in July.

China has offered to send mainland testing staff to the city to carry out “large scale nucleic acid testing”.

In a Saturday statement, the National Health Commission of China (NHC) said it has set up a team comprised of 60 clinical laboratory staff and an “advance unit” will arrive in the city on Sunday. – Rappler.com