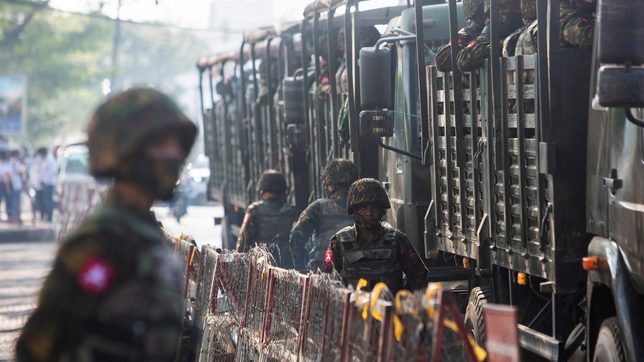 FILE PHOTO: Soldiers stand next to military vehicles as people gather to protest against the military coup, in Yangon, Myanmar, February 15, 2021. REUTERS/Stringer/File Photo

More than 400 telecommunication towers in military-ruled Myanmar have been destroyed by opponents of a February 1 coup, state media reported on Friday, attacks which cellphone operators said had severed connectivity for many customers.

The Global New Light of Myanmar newspaper, the junta’s mouthpiece, said the destruction of the towers was intended to undermine the government. The military has previously shut down the internet in many areas to try to disrupt its opponents during protests and strikes.

“Terrorists are attempting to hamper the implementation of the future activities of the nation and to overthrow the
government’s administrative machinery,” the newspaper reported, adding that 88% of the 409 towers destroyed are owned by Mytel, a partly army-controlled firm. Militias allied with a shadow Myanmar government have claimed responsibility for damaging some towers but have said the military also contributed by planting mines near some facilities.

A spokesperson for junta did not answer Reuters’ calls seeking comment on Friday.

Since the coup, Myanmar’s security forces have killed more than 1,300 people and arrested thousands in a bid to crush resistance, according to the Assistance Association for Political Prisoners, a local non-governmental organization.

The military says those figures are exaggerated.

Telenor, one of the most popular telecom businesses in Myanmar, told Reuters a number of its towers had been damaged.

“It is hard to estimate how many customers are without connectivity due to sabotage, fitting of explosives or anti-personnel mines,” a spokesman said in an email.

In September, Mytel said about 700,000 people in Myanmar were estimated to have lost the internet access due to attacks on towers. – Rappler.com