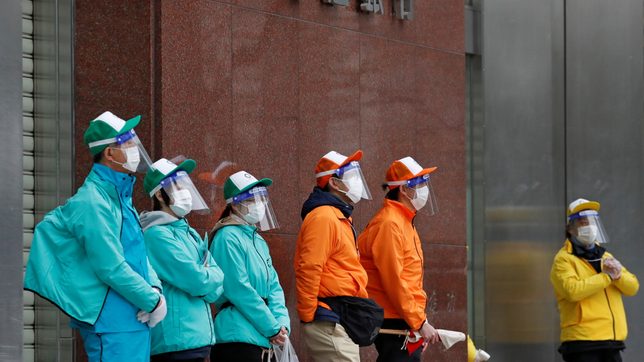 SURPRISE. Officials wearing face masks and face shields are seen before the start of the Hokkaido-Sapporo Marathon Festival 2021, a half-marathon and a 10K race which is a test event for the Tokyo 2020 Olympics marathon race, amid the COVID-19 outbreak, in Sapporo, Hokkaido, Japan, on May 5, 2021.

Facebook Twitter Copy URL
Copied
Hokkaido, Okayama, and Hiroshima will join Tokyo, Osaka, and 4 other prefectures on May 16 under a state of emergency until May 31

Japan said on Friday, May 14, it would declare a state of emergency in three more prefectures hit hard by the COVID-19 pandemic, in a surprise move reflecting growing concerns about the virus’s spread.

The latest state of emergency declarations would come as Japan grapples with a surge of a more infectious strain of COVID-19 just 10 weeks before the Tokyo Olympics are due to start.

Hokkaido, Okayama and Hiroshima will join Tokyo, Osaka and four other prefectures on Sunday, May 16, under a state of emergency until May 31, said Economy Minister Yasutoshi Nishimura, who is also in charge of coronavirus countermeasures.

With an eye on the economy, the government had originally proposed a more targeted “quasi-emergency” declaration for five additional prefectures.

“Experts told us that a strong message had to be sent to the public given the critical situation with the mutant strains,” Nishimura said in parliament to explain the government’s retraction of its original proposal.

Three prefectures will be added to the lesser declaration as planned.

With the latest measures, 19 out of Japan’s 47 prefectures covering about 70% of its population would fall under restrictions that include closures of eateries by 8 p.m. and a ban on alcohol at bars and restaurants.

Dai-ichi Life Research Institute estimated that the nine-prefecture state-of-emergency could slash about 1 trillion yen ($9.1 billion) from gross domestic product and cut 57,000 jobs over the coming months.

A Reuters poll on Friday showed Japan’s economy would grow much more slowly than previously hoped this quarter, hobbled by emergency restrictions.

Experts say medical resources are being pushed to the brink, while Japan’s inoculation drive has been the slowest among advanced nations with just 3% of the population vaccinated, according to Reuters data.

Prime Minister Yoshihide Suga’s popularity has been hit by what many perceive as the government’s inadequate coronavirus response. A fresh poll by Jiji News put the cabinet’s approval rating at 32.2%, down 4.4 points from the previous survey.

The northern island-prefecture of Hokkaido, which is set to host the marathon event, reported a record 712 cases on Thursday, May 13, while Tokyo had 1,010 cases. Nationwide, Japan has seen about 656,000 confirmed cases so far, with 11,161 deaths.

The state of emergency in Tokyo and elsewhere would run through this month, by which time the Olympic Games would be fewer than two months away.

Public opposition to the Summer Games – already postponed a year from 2020 due to the global pandemic – has persisted.

A change.org petition calling for the cancelation of the Olympics garnered more than 350,000 signatures in just nine days – a record pace for the forum’s Japan version, according to the campaign’s organizer – and was submitted to the Olympic and Paralympic committee chiefs as well as Tokyo Governor Yuriko Koike.

In a rare and blunt expression of trepidation over the Olympics by a high-profile businessman, SoftBank Group Corp CEO Masayoshi Son said on Thursday he was “afraid” of having the Games, fearing for both Japan and countries sending athletes to Tokyo.

Economy Minister Nishimura repeated the government’s stance that it would do its utmost to contain the pandemic to be able to hold a “safe and secure” Games. – Rappler.com