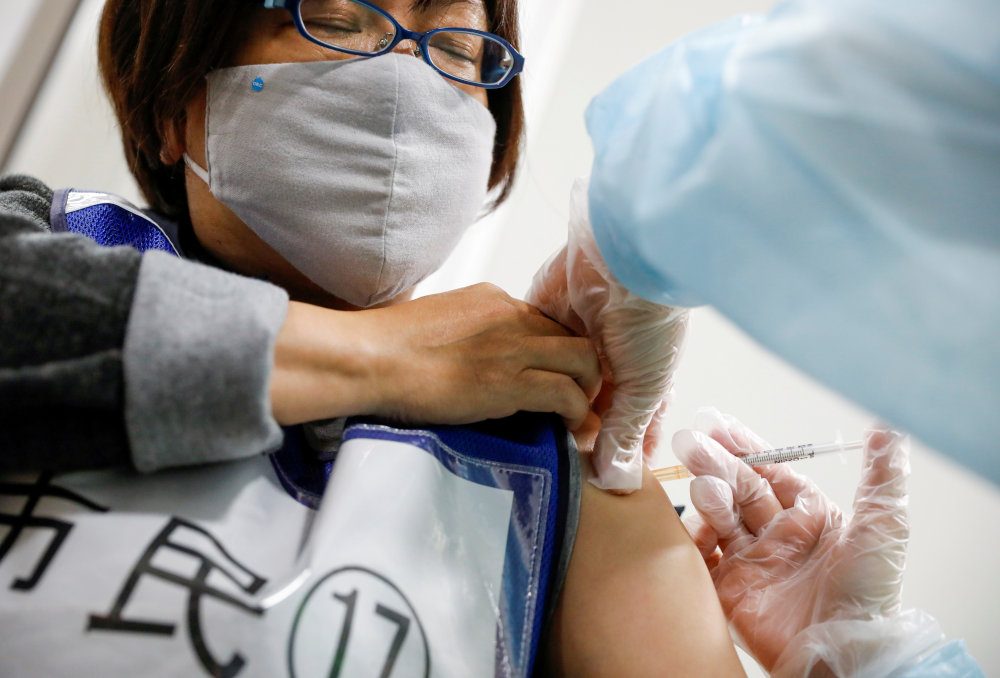 MOCK VACCINATION. A participant receives a mock coronavirus disease vaccine shot during an inoculation exercise as the local municipality prepares for the coronavirus disease mass vaccination campaign, at a shopping mall in Sakura, east of Tokyo, Japan, on March 5, 2021.

Japan will open a mass vaccination center in central Tokyo next month, officials said on Tuesday, April 27, part of the country’s bid to speed up its COVID-19 inoculation campaign as the Olympic Games looms.

Japan imposed a third state of emergency in its major population centers on Sunday, as the country attempts to combat a fourth wave of infections with just 87 days remaining until the scheduled start of the Games.

The Defense Ministry tweeted it had been asked by Prime Minister Yoshihide Suga to set up the Tokyo vaccination center by May 24 with plans for it to operate for three months. The facility will service residents in the capital and the surrounding prefectures of Saitama, Chiba, and Kanagawa.

Local media reported the government planned to use Moderna Inc’s vaccine to inoculate about 10,000 people each day at the center. However, Chief Cabinet Secretary Katsunobu Kato said those decisions had not yet been made.

Meanwhile, Toyota City in central Japan said it was setting up vaccination centers with the help of Toyota Motor Corp . The carmaker will offer up about 450 staff and 4 sites to start operations on May 30, city officials said in a statement.

Japan began vaccinating its sizable elderly population this month but only about 1.5% of the country’s entire 126 million population has been inoculated, according to a Reuters tracker.

Officials have so far been dependent on limited imported doses of Pfizer Inc’s vaccine, but vaccine minister Taro Kono has said he expects the program to pick up in May when Pfizer shipments are due to accelerate.

Kono is also hopeful that regulators will soon approve Moderna’s vaccine and AstraZeneca’s vaccine – of which it has ordered 50 million and 120 million doses respectively.