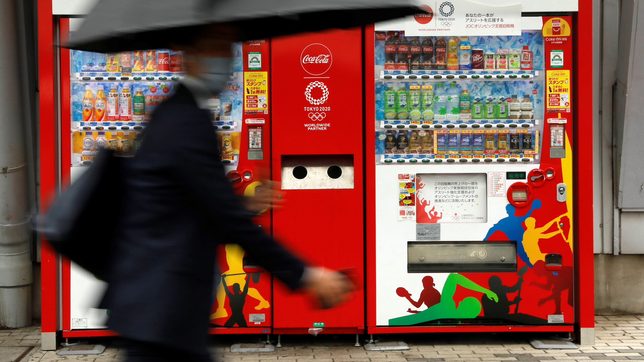 A passerby wearing a protective face mask walks past in front of beverage vending machines of the worldwide Olympic partners' Coca-Cola beverages, amid the coronavirus disease (COVID-19) outbreak, outside an Olympic facility in Tokyo, Japan May 13, 2021. REUTERS/Issei Kato

Facebook Twitter Copy URL
Copied
From early in the crisis, the government has said it would not skip regulatory steps to ensure the safety and efficacy of vaccines. That means domestic clinical trials and reviews taking several months to complete.

Japan’s COVID-19 vaccine chief has blamed a rigid drug approval system for a slow inoculation campaign that is relying on only one approved shot, as a fourth wave of infections raises worries amid preparations for the Summer Olympics.

Taro Kono, the minister in charge of vaccines, took responsibility for the public frustration with the vaccine distributed system but also said the approval process was a disadvantage in an emergency.

“Even though we are in a state of crisis, we’re still using the same rules to approve vaccines that we do under normal times,” Kono said in a TBS television interview broadcast on Wednesday, May 12.

“In the wake of this corona situation, the administration needs to change.”

The government aims to inoculate most of its 36 million people over the age of 65 by the end of July. The Olympics, postponed last year as the virus was spreading around the world, are due to begin on July 23.

To reach that vaccination target, the government hopes to deliver about 1 million shots a day, about three times faster than the current pace.

From early in the crisis, the government has said it would not skip regulatory steps to ensure the safety and efficacy of vaccines. That means domestic clinical trials and reviews taking several months to complete.

Some other countries have introduced emergency approvals to deploy vaccines faster.

Japan approved the vaccine developed by Pfizer Inc and BioNTech SE, in mid-February, two months later than in the United States.

The delay, along with a host of logistical problems, has meant Japan has inoculated just 2.9% of its population, the lowest rate among wealthy countries.

Pfizer started its Japan trial in October, recruiting 160 volunteers to take its vaccine. AstraZeneca PLC, which is still being considered by domestic regulators, started its vaccine trial earlier with 256 subjects.

But trials involving such small numbers of people are “really meaningless”, said Takahiro Kinoshita, a Japanese physician and researcher based in Boston.

Japan’s trials, lengthy reviews and slow rollouts stem from public fears about vaccines that have undermined previous inoculation campaigns for HPV and other diseases.

“Everything is connected to vaccine hesitancy behavior,” he said.

The health ministry and the Pharmaceuticals and Medical Devices Agency, Japan’s main drug regulator, did not immediately respond when contacted for comment on Kono’s remarks.

About 75% of Japanese are dissatisfied with the vaccine rollout and Japan had the lowest rates of approval of government handling of the pandemic among six major economies in a survey by global consultancy Kekst CNC released on Wednesday. – Rappler.com