Facebook Twitter Copy URL
Copied
At a time when the United States is losing diplomatic traction in Southeast Asia, there is a huge advantage to Japan’s emergence as a critical security hub in the region
As published by CSIS

Japan’s Yoshihide Suga made his first overseas trip as prime minister from October 18 to 21. He did not travel to Washington, as his predecessor Shinzo Abe had, but instead spent two days each in Hanoi and Jakarta. There was a time when US policymakers would have fretted about the “Asianization” of Japan’s foreign policy and Japanese pundits would have pointed to Suga’s trip as evidence of “datsu-Bei, nyu-A” (distancing from the United States and entering Asia). But today, Suga’s visit is another reminder that the traditional US “hub-and-spokes” alliance system is transforming for the better.

Rather than “choosing” Asia over the alliance with the United States, Japan is reinforcing the free and open Indo-Pacific vision championed by both Washington and Tokyo. Former secretary of state James Baker worried about this scenario in the early 1990s, when he called for a continuation of the security architecture in which the United States was the hub and Japan and other allies were the “spokes” in the region. But with the shifting balance of power and Beijing’s growing ambitions, security now requires that key allies like Japan become “hubs” themselves within the region’s emerging security architecture. And Suga’s visit to Southeast Asia advances that strategy.

Suga met with his Vietnamese counterpart Nguyen Xuan Phuc on October 19 and signed pacts across a range of issues. But the most important were probably those related to a burgeoning security partnership. Under the Abe government, Tokyo undertook ship visits, low-level joint training, and the provision of coast guard patrol vessels and other platforms to Vietnam. But it avoided transferring explicitly military platforms. That is set to change under a new equipment transfer agreement signed during Suga’s visit. The Japanese prime minister declared the new deal “a major step” in the relationship and declared, “Vietnam is crucial to achieving our vision of ‘the Free and Open Indo-Pacific.’” Neither leader mentioned China, but Beijing’s growing use of coercive tools against neighboring states – including both Japan and Vietnam – provided a subtext to the entire visit. 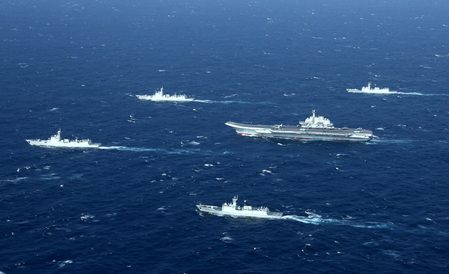 Tokyo has already inked similar defense equipment transfer agreements with Malaysia and the Philippines and is negotiating deals with Indonesia and Thailand. In August, Japan delivered its first-ever official military equipment export – a radar system – to the Philippines. Tokyo has become a major security partner for Manila, providing hundreds of millions of dollars in low-interest loans for coastguard vessels and maritime patrol aircraft. It increasingly exercises with the Philippine military and trails only the United States and Australia in joint training with Filipino counterparts. The two sides have been quietly negotiating a visiting forces agreement for several years – something that would have been unthinkable just a decade ago. But the real strength of Japanese influence in Southeast Asia is that it is multifaceted. In Hanoi, Suga agreed to ease COVID-19-related travel restrictions with Vietnam, encourage greater Japanese investment as companies move out of China, and diversify important supply chains. Tokyo is the top infrastructure builder in the region, a leading investor and trading partner for every country in Southeast Asia, and a vital source of aid (the largest in the case of Vietnam). After decades of official development assistance, benign investment, and low-key diplomacy, multiple surveys demonstrate that Japan is viewed as by far the most trusted partner for Southeast Asia. Japan has succeeded by giving the fiercely independent members of the Association of Southeast Asian Nations (ASEAN) options rather than pressing them to choose between China and Japan, or the United States. It is a lesson US policymakers would do well to heed.

Suga took a similar message to Jakarta, where he signed multiple agreements with President Joko “Jokowi” Widodo. The two leaders pledged to increase security cooperation. They offered fewer details but highlighted maritime security, another indirect reference to shared concerns about China. Suga offered low-interest loans to help Indonesia cope with natural disasters, agreed to allow health care workers to travel between the two countries and open discussion on a wider business travel corridor, and pledged to hold a two-plus-two between each country’s defense and foreign ministers at an early date. The Japanese prime minister’s most eye-catching announcement was a low-interest loan of nearly $500 million to help Indonesia cope with the economic repercussions of the COVID-19 pandemic. This highlighted Tokyo’s increasing leadership on coronavirus assistance in Southeast Asia. After a slow start in the spring, Japan has emerged as the region’s largest source of bilateral foreign assistance to respond to the pandemic, by a wide margin.

A day after arriving back in Tokyo, Suga met with the visiting commander of US Indo-Pacific Command, Admiral Philip Davidson. The two expressed “deep concern” about Beijing’s actions in the South and East China Seas. And Suga told Davidson, “I hope that we can continue to deepen our coordination and cooperation in enhancing the deterrence and response capability of our alliance, which is the strongest ever in history.” It was a clear sign that the alliance remains fundamental to Japanese security and both sides welcome its evolution toward a more equal partnership.

As Japan becomes a key hub for security cooperation and capacity building in Southeast Asia, it is important to consider the next stage of strategy toward the region. For one thing, the United States needs to encourage better coordination among its allies as “hubs” within regional security architecture. U.S. and Australian coordination with Japan on capacity and infrastructure building is improving, but South Korea is engaging in “parallel play.” It is exporting weapons systems and good governance models – a net good for the region – but often without coordinating with other US allies. Japan, meanwhile, will need better systems to help Southeast Asian states sustain and maintain their new equipment. This is an area where retired Self Defense Force personnel could play a role and where the United States could offer experience.

Japan could probably do more to contribute to the strengthening of democratic governance in Southeast Asia. Over the past decade Tokyo has gone from spending almost nothing to providing about $300 million annually in assistance for democracy in the region. But it never does so through independent nongovernmental organizations and always strives not to offend partners, even authoritarian governments. Japan will find its own way to reinforce democratic governance, without which corruption could become the lubricant for Chinese influence through the Belt and Road Initiative. But the free and open part of Tokyo’s strategy will need to continue evolving.

Overall, at a time when the United States is losing diplomatic traction in Southeast Asia, there is a huge advantage to Japan’s emergence as a critical security hub in the region. Polls show that the Japanese people and most Southeast Asians want more U.S. engagement, and Suga’s active diplomacy in the region will make that easier down the road. – CSIS | Rappler.com

This article was originally published by the Center for Strategic and International Studies (CSIS) on October 27. The original version is accessible here.

Michael J. Green is senior vice president for Asia and Japan Chair at CSIS and director of Asian Studies at the Edmund A. Walsh School of Foreign Service at Georgetown University. Gregory B. Poling is senior fellow for Southeast Asia and director of the Asia Maritime Transparency Initiative at CSIS.