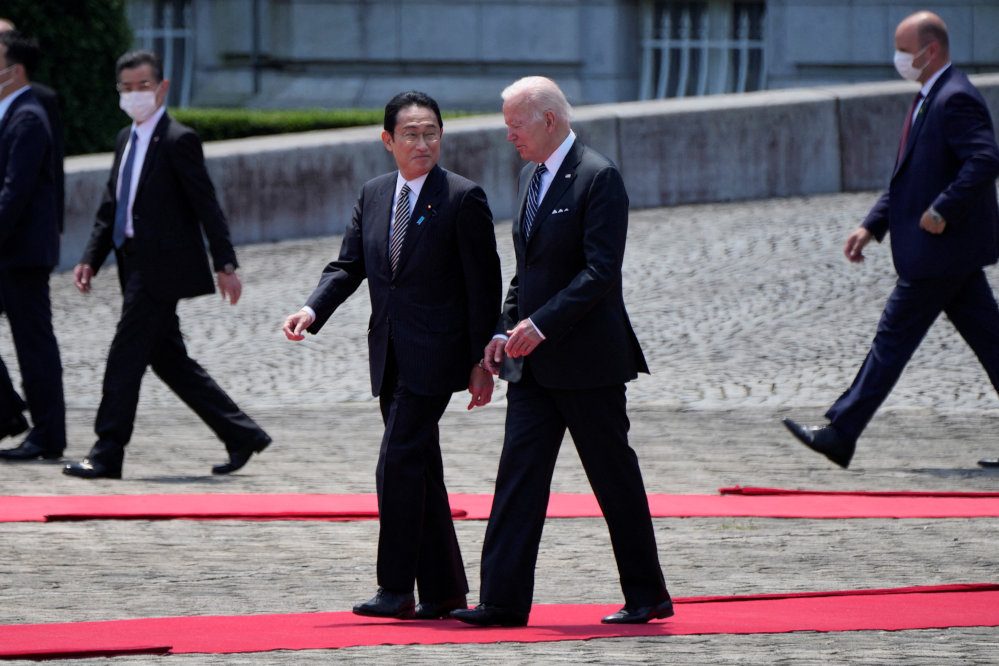 BIDEN AND KISHIDA. US President Joe Biden and Japanese Prime Minister Fumio Kishida talk ahead of a welcome ceremony for Biden at the Akasaka Palace state guest house in Tokyo, Japan, May 23, 2022.

Facebook Twitter Copy URL
Copied
'The US-Japan alliance has long been the cornerstone of peace and prosperity in the Indo-Pacific, and the United States remains fully committed to Japan's defense,' President Joe Biden says

TOKYO, Japan – President Joe Biden assured his “good friend” Prime Minister Fumio Kishida of Japan on Monday, May 23, that the United States is fully committed to Japan’s defense, amid simmering tension with China and the ramifications of Russia’s invasion of Ukraine.

The cornerstone of Biden’s two-day visit, which includes meetings with the leaders of Japan, India and Australia, in the “Quad” group, will be the launch of an Indo-Pacific Economic Framework, a broad plan providing an economic pillar for US engagement with Asia.

“The US-Japan alliance has long been the cornerstone of peace and prosperity in the Indo-Pacific, and the United States remains fully committed to Japan’s defense,” Biden said at the beginning of talks with Kishida at the Akasaka Palace in central Tokyo.

Biden was greeted with a military honor guard that played the anthems of both countries under a bright blue sky.

Earlier, he met Emperor Naruhito, talking briefly at the palace entrance before being ushered inside. The White House said Biden offered greetings on behalf of the American people, highlighting the strength of the US-Japan relationship anchored by deep people-to-people ties.

The two nations are expected to discuss Japan’s plans to expand its military capabilities and reach in response to China’s growing might.

The allies are also expected to reconfirm their close ties in the face of Russia’s invasion of Ukraine, agreeing that unilateral changes to the status quo by force are unacceptable.

Worries are growing in Asia about an increasingly assertive China, particularly in light of its close ties to Russia, and tension in particular has been rising over self-ruled Taiwan, which China considers a renegade province.

North Korea and regional issues will also be on the agenda, with Biden later on Monday scheduled to meet families of Japanese who were abducted years ago to train spies in North Korea.

But the centerpiece of the day will be Biden’s launch of the Indo-Pacific Economic Framework for Prosperity (IPEF), a program to bind countries more closely through common standards in areas including supply-chain resilience, clean energy, infrastructure and digital trade.

The United States has lacked an economic pillar to its Indo-Pacific engagement since former President Donald Trump withdrew from a multinational Trans-Pacific trade agreement, leaving the field open to China to expand its influence.

But the IPEF is unlikely to include binding commitments, and Asian countries and trade experts have given a decidedly lukewarm response to a program limited by Biden’s reluctance to risk American jobs by offering the increased market access the region craves.

Biden arrived in Japan late on Sunday from South Korea and will leave on Tuesday for the United States. – Rappler.com